Generic Pre-Review Wrestling Disclaimer: Somewhere before my affinity for globetrotting documentaries, Martin Scorsese films and The Criterion Collection, I found a soft spot for professional wrestling. Don't ask me how this happened; it just did. Despite this declaration, I shower daily, all my teeth are accounted for, I have a college degree...and, most importantly, I have a wife with the same merits. I'm not alone, of course. The wrestling fans I know aren't slack-jawed yokels; they simply appreciate the spectacle and illusion that this genuine sport creates, in the same way movie lovers enjoy fast-paced fights and thrilling chase sequences. Long story short: we know this stuff is "fake", but we like it anyway. Give us a break.

Having not watched WWE on a weekly basis for the last five years, I've managed to scratch my wrestling itch through screeners, online news sites and the occasional blind buy. My first exposure to the Ring of Honor promotion occurred roughly four years ago, after ordering one of their catalogue DVDs on the recommendation of a friend. It was such an impressive show that I've purchased a dozen or more titles since then---and obviously, each has been worth the price of admission. First-time viewers will liken ROH to a faster, more technically-grounded and even less orthodox version of 1990s-era ECW, or even a close cousin to the Japanese incarnation of everyone's favorite staged sport. ROH is simply a spectacle to behold, packed with innovative maneuvers, strong technical wrestling, ridiculous high spots and intense crowd interaction. In short: those weaned on WWE, WCW, TNA and everything in-between are in for a real treat.

Though DVD sales have been a saving grace for those unable to attend the company's East Coast-based live events, Ring of Honor is still a relatively unknown entity; after all, any up-and-coming promotion, regardless of location or budget, automatically pales in comparison to the WWE juggernaut. As long-time fans will testify and new viewers will learn, however, ROH is well worth seeking out. The promotion's first stab at mainstream DVD distribution began with the releases of Stars of Honor, Bloodstained Honor and Best In the World in recent months, all distributed by Koch Vision Home Entertainment. Thankfully, the company has continued to offer low-priced ROH collections---which brings us to the subject of today's review, Greateat Rivalries. It's not quite as impressive as other volumes, but the bulk of this three-hour collection is still worth a good look.

Obviously enough, this three-hour compilation takes a look at several long-running rivalries during ROH's short history. Some are recognized as "the final showdowns", others are simply stops along the way. In any case, Greatest Rivalries might be the least accessible of the four existing ROH compilations released by Koch Vision, since casual fans obviously haven't followed all of these feuds very closely. Prazak and Leonard introduce each bout with a short history of the respective rivalries, but video packages would've been a more effective approach (and most likely out of the production budget, unfortunately). So while some of these matches are strictly for ROH enthusiasts of several years, there's still plenty of great action nonetheless. With that said, let's take a look at the card: 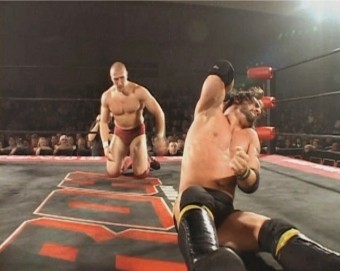 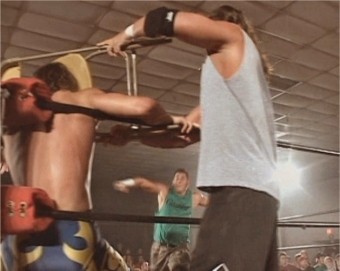 From start to finish, more than half of these matches are quite enjoyable. Samoa Joe vs. Homicide is a solid title match with plenty of heated crowd interaction. After a lengthy introduction involving Homicide's entourage, this 30 plus-minute segment offers plenty of near-falls, heavy hits and innovative moves. AJ Styles vs. Jimmy Rave (at top) is an entertaining bout with an unusual stipulation: the first one to hit their finishing move---in this case, the "Styles Clash"---is declared the winner. Despite this odd gimmick, it's a crowd-pleasing match that ends with Foley's farewell speech to the Long Island crowd. Jay & Mark Briscoe vs. Austin Aries & Roderick Strong marks ROH's UK debut and flows perfectly, featuring plenty of well-executed tag maneuvers and interaction. "American Dragon" Brian Danielson vs. Aries (above left) is a short but sweet technical match from their recent best-of-three series, taking place roughly three years after an epic 76-minute bout in 2004. Strong vs. Erick Stevens---a joint production with ROH's sister promotion, Full Impact Pro Wrestling---ends the show on a high note, offering plenty of solid wrestling and back-and-forth action.

Other matches are capable enough but don't quite fit in. CM Punk vs. Raven isn't exactly the best way to start the show, as this 2003 dog collar match is a bit dull and ends with a cheap finish. BJ Whitmer vs. Jimmy Jacobs takes the action inside a steel cage: this bloody brawl, which starts quite abruptly, eventually turns into a halfway-decent match at roughly the 15-minute mark. Sadly enough, their rivalry apparently stems from a love-story angle right out of WWE's playbook, complete with "damsels in distress" at ringside. In any case, it looks like a five-star match compared to Team ROH [Adam Pearce, Ace Steel, Colt Cabana & BJ Whitmer] vs. Team CZW [Claudio Castagnoli, Super Dragon, Necro Butcher & Nate Webb] (above right), a loose and lazy brawl that's surprisingly presented as a legitimate match once all of the participants show up. This slugfest is twice as long as it really needs to be, slowing down the momentum considerably as the penultimate match in this compilation.

Just a footnote: The entrances for these matches are cut and a few end quite abruptly, presumably due to music rights issues (as many ROH wrestlers use existing songs instead of newly-created tunes). This shouldn't be a deal-breaker, but it's worth noting.

Let's get this out of the way: ROH's production budget is probably equal to WWE's catering costs, so don't expect a pretty picture. Events are shot on the cheap and feature a generally dull color palette and only average image detail. As these particular matches have been taken from different events, the quality varies even further from start to finish; one such example is AJ Styles & Matt Sydal vs. Dragon Kid & Genki Horiguchi, which is considerably darker than the other bouts. The 1.33:1 transfer is also moderately peppered with digital combing, pixellation and compression artifacts. With that said, Bloodstained Honor doesn't look any better or worse than comparable ROH shows from the 2004-07 era, so most fans should know what to expect.

The audio presentation is equally as rough, but this is also due to the source material. Fans won't get an incredibly dynamic or engaging soundstage here, though crowd noise and other sounds usually don't fight for attention too much. The only real issue is the poor recording and mixing of certain play-by-play commentaries, many of which were recorded at a later date (and in a much smaller room!). As expected, no subtitles or Closed Caption support is offered during these matches. 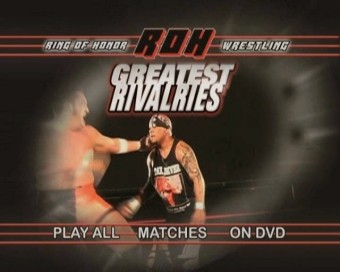 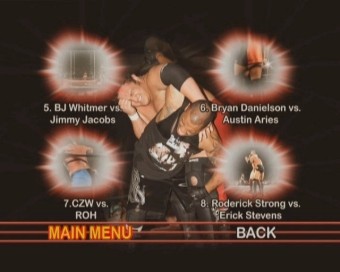 Seen above, the animated menu designs are basic and easy to navigate. This three-hour compilation has been divided into eight chapters (one for each match), all of which are preceded by retrospective comments from ROH personalities Dave Prazak and Lenny Leonard. Oddly enough, one cycles through twice. This one-disc release is housed in a standard black keepcase and includes a Koch Vision promotional booklet and a "collectible trading card" (as big as a full-sized insert!). I got Nigel McGuinness again, leading me to believe that these things travel in pairs.

Bonus Features
Like most of these volumes, no extras have been included to sweeten the pot. This proves to be somewhat disappointing, but the low price tag and extensive content more than make up for it.
Final Thoughts

Greatest Rivalries should satisfy plenty of wrestling fans, but it's uneven in several spots and doesn't quite reach the heights of other ROH compilations. Koch Vision Home Entertainment's one-disc package is roughly identical to past efforts, offering a relatively unimpressive technical presentation and no bonus features. As mentioned before, though, it's hard to dismiss three hours of action at such a rock-bottom price point, so this one floats by on principle. As Koch Vision's fourth collection from the ROH vaults, Greatest Rivalries is still a solid buy at $15---but if you're limited to just one DVD, Best In The World or Stars Of Honor offer the most bang for your buck. Recommended, but mainly to those who already own the other three collections.

DVD Talk Review Links: Other ROH Releases
Randy Miller III is an affable office monkey based in Harrisburg, PA. He also does freelance graphic design projects and works in a local gallery. When he's not doing that, he enjoys slacking off, second-guessing himself and writing things in third person.