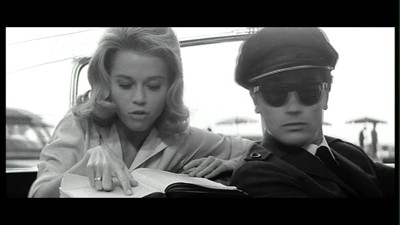 The 1964 French thriller Joy House is a strange little movie. Directed by Rene Clement and starring Alain Delon, who had hit paydirt together with Purple Noon four years prior, it's an English-language suspense picture without much suspense that is both buoyed and dragged down by its persistent weirdness.

Delon stars as Marc, an American thug who has been tomcatting around with a gangster boss' wife. Though he gets out of the States before the cuckold discovers the affair, a bunch of the crook's goons are sent to Paris to fetch Marc and bring back his head for his lover to see. Narrowly escaping execution in a cliffside shootout, Marc holes up in a nearby monastery. There, he is discovered by a widow, Barbara (Lola Albright), and her curvaceous yet naïve cousin, Melinda (Jane Fonda). They visit many local shelters delivering food to the homeless, and they hire Marc to be their chauffeur. Once they get him back to their spacious home, however, things get bizarre. The two live there alone, with Melinda acting as Barbara's maid, and the demanding older woman spends all of her time upstairs talking to herself. Both start making moony eyes at Marc, and Marc starts to suspect something isn't quite right about his new job situation--especially after he realizes that Melinda has been drugging his coffee. With nowhere to run, but also no safety in his current position, Marc tries to get to the bottom of what happened to Barbara's husband and what is going on between the two women.

Joy House's first problem is its title. The French moniker was actually Les Felins, or The Cats, which is far more evocative in terms of the mood of the piece and of the nature of the ladies and their prowling sexuality. (There is also a cat living in the house.) That someone thought "joy" was the right adjective for Marc's prison might give some hint to what a confused picture Joy House often is. "Crazy" might have been more appropriate. While Rene Clement may be trying to channel some Hithcockian paranoia and the angular surreality of Arkadin-era Welles, the script he co-wrote with Pascal Jardin, working from a novel by Day Keene, seems to have gotten mixed up in the copy machine with a draft of Whatever Happened to Baby Jane? Elsewhere, someone told set decorator Jean Andre (who actually gets a credit on the DVD box) that this was a gothic horror movie.

The schizophrenia results in a film that never quite comes to terms with its own split personality. Delon has a sexual machismo that recalls Brando, but Fonda's character is undercooked. Is she innocent or is she a predator? I am not sure Clement even knows. The secret that is lurking in the attic is neither hidden nor exposed well, and so the audience never feels any sense of mystery or surprise. This is not aided by Lalo Schiffrin's score, which is extremely pushy in its attempts to amp up the mood. The master composer seems to think he's working on one of his more exciting projects like Bullitt or Mission: Impossible, and so his soundtrack is way over the top. He's the guy on cocaine at the marijuana party.

Still, even with all of these faults, Joy House is pretty enough to look at that it's relatively easy to get through. Henri Decae's black-and-white photography is quite lovely, and he and Clement create a lot of impressive shots, including several uses of mirror images that multiply into infinity, suggesting the various layers of motivation each character is trying to keep hidden. Delon, Albright, and Fonda are all gorgeous, as well, and the sexual tension and desire is palpable. Despite its clunkiness, the plot is actually serviceable, and so Joy House is merely uninspired rather than painfully bad. 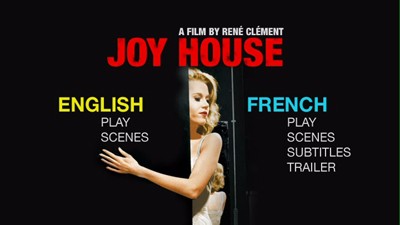 Video:
"Painfully bad" is a descriptive I would use for this Koch Lorber DVD, however. I don't have the 2000 edition of this film that Image released, but it's hard to imagine it being any worse. If any restoration was done on the print, then I'd hate to see the state it was in originally. Shown in a 2.35:1 aspect ratio, Joy House is consistently marred by dirt and scratches, edge enhancement and digital combing, and tonal values that are all over the place. The blacks are never deep, and brighter scenes are regularly washed out. Not even the gray tones remain consistent.

Sound:
There are two Dolby Digital monaural soundtracks to choose from: an English language version and a French dub. The main menu contains each option, and you actually have to choose which one to play, you cannot toggle between them while watching the film. English subtitles are provided from the French soundtrack.

From watching it, it seemed obvious that the preferred soundtrack was English. Most of the movie, if not all, was shot in English. Even Delon's dialogue appears to have been recorded in English on set, as his lips consistently match what he is saying. A brief sample of the French option showed that just about everyone but Delon had their dialogue redone by other actors.

The sound quality on this disc isn't as bad as the picture quality, but not by much. There is no hiss or any pops or glitches--excepting a pause in the music when chapter 1 turns over to chapter 2--but all of the levels seem to be cranked up really high. So, no matter what volume I played the movie at, it always sounded louder than it was supposed to.

Extras:
Outside of the alternate audio, the only extra is the original French trailer.

FINAL THOUGHTS:
Joy House certainly has a crew list that suggests it should have been a better film. The teaming of Rene Clement and Alain Delon alone was enough to get me to watch, and a young, sexy Jane Fonda was supposed to be icing on the cake. Unfortunately, the movie fizzles, with a bizarre plot that lets its quirks get in the way of solid storytelling and various dissonant moods never quite gelling. Even worse, this is a truly poor DVD, with subpar image and audio quality. Rent It. 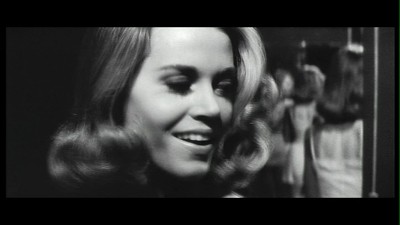