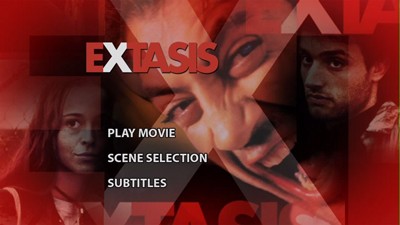 I guess it makes sense that now that Javier Bardem has become well-known in America thanks to his Oscar-winning turn in No Country For Old Men that some of his older Spanish films would start to get released on DVD stateside. This 1996 psychological thriller, Extasis (Ecstasy), shows the 27-year-old actor in fine form, playing a charismatic, calculating schemer worthy of Tom Ripley himself.

Rober is a going-nowhere twentysomething sick of dead-end jobs. With his girlfriend Ona (Leire Berrocal) and best buddy Max (Daniel Guzman), he hatches a plan to rob their families and buy a bar near the beach. As he sees it, these people have done little for any of them--Rober's mother left when he was a child, as did Max's father--so why not take what is rightfully theirs anyway? It's upward mobility by way of revenge.

Too bad things go south when they try to rob Rober's uncle, and Max gets shot in the foot. Lacking the bail money to get him out of prison, Rober instead decides to adopt his identity and cozy up to Max's father, Daniel (Federico Luppi, who has played in all of Guillermo del Torro's Spanish-language features), a wealthy theatre director whom Max hasn't seen for sixteen years. Once Rober is immersed in his new world, he discovers it's not nearly as straightforward as one might expect. He is seduced by his father's girlfriend, an insecure actress named Lola (Silvia Munt), and then seduced by the intoxicating life of the rich and artistic. Daniel is producing a play about estranged fathers and sons, and eventually he decides to cast his own son in the role of the prince who will assume the mantle of power and become king. Rober/Max begins to lose a grip on who he is, feeling the pressure from both sides. Ona and the real Max--whose own encounter with Daniel, pretending to be Rober, turns out to be the worst father-son reunion ever--want to rob the old man blind, but Rober doesn't want to go back to being who he really is.

The script for Extasis, co-written by Joaquin Oristrell (Between Your Legs, Queens) and the film's director, Mariano Barroso, has some interesting things going on. The duality of the theatrical world and the funhouse mirror image of the con artists makes for fertile ground. Lies are piled on lies, hardly anyone is who they say they are, and the motivations of the various players are hazy puzzles at best. The closer Rober gets to the center of Daniel's world, the more he loses himself. It would have been easy for Bardem to get overly showy in the role, but instead he is careful about depicting his character's slide into confusion as a gradual process. The slips of the tongue, the attempts to hide the truth and the guilt that follows the lies, give us the sense that he is starting to drift off course without the actor having to point them out. Bardem understands Rober's internal desire to be something more, to be a part of a real life and a real family, and he makes that desire manifest. Likewise, Federico Luppi is quite good as the father figure who seems to know more about the duplicity than he lets on, who is willing to accept it for the reward of having a protégé. No wonder the real Max loses his cool, he sees Rober snatching his birthright. Daniel Guzman is excellent as the perpetual screw-up Max (his own father calls him a buffoon). So much so, if someone else doesn't slap him around, you might want to reach through the screen and do it yourself.

If there is one thing to complain about, it's that Extasis doesn't go far enough. Barroso's undistinguished direction never reaches the emotional heights demanded by the title. There is a point just before the climax when the film should let go and totally go for broke, but everyone stays perfectly in check and so no tension is built in anticipation of what turns out to be a very unsurprising ending. There's a lot of good planning being done, but the execution of the plan seems more redundant or expected than exciting. It's too bad, because Javier Bardem is performing at several notches above the material, and it would have been nice if the rest of Extasis had somehow risen to the challenge. 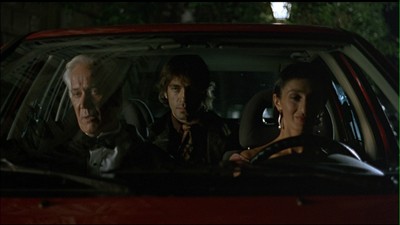 Video:
The 1.85:1 anamorphic widescreen transfer of Extasis is basically average. It has decent colors and an overall solid image resolution. There is some surface noise, little crackles and pops here and there, as well as the occasional quiver in the image, but nothing frighteningly horrible.

Sound:
The original Spanish soundtrack is mixed in Dolby Digital audio. Like the picture, an average mix with no obvious flaws, but also lacking any great effects to wow you. The English subtitles are solidly written and easy to read.

FINAL THOUGHTS:
Recommended. Extasis is a 1996 Spanish suspense picture most notable for an early career performance by Javier Bardem. As a risk-taking con man posing as the son of a rich theatre director, Bardem captures the transformation that can happen when a confidence artist--or an actor--immerses himself so deeply in a role, he begins to forget who he really is. The overall movement of the plot doesn't really break any new ground, but there is nice interplay between the theatrical world and the criminal underground, and all of the performances are convincing enough to make the fairly standard story seem special. 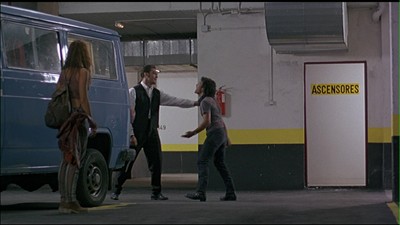