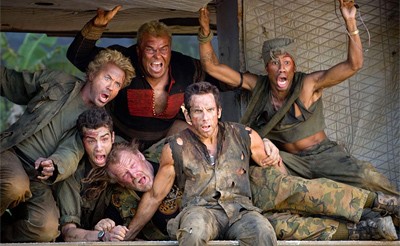 In writer/director/star Ben Stiller's new comedy, Tropic Thunder, Robert Downey Jr., playing Russell Crowe-like actor Kirk Lazarus, a bad-boy Australian thespian who had his skin surgically darkened as part of his method in preparation for the role of an African American solider in the Vietnam War, describes his own complicated situation by saying, "I'm playing the dude who plays a dude who is disguised as another dude." Perplexing, self-referential, and yet strangely accurate. They could have adapted this line for the poster: Tropic Thunder is the movie about a movie that's really another movie.

Downey's Lazarus is one of the leading serious actors of this flick's fictional Hollywood, and he is joining fading action star Tugg Speedman (Stiller) and low-brow comedian Jeff Portnoy (Jack Black) in Vietnam to shoot a multi-million-dollar adaptation of a book called Tropic Thunder, the story of Four Leaf Tayback (Nick Nolte), a vet who went through hell and lived to tell about it. In a case of art imitating life, this production starts to sink into hell itself, Apocalypse Now! style. This leads Tayback and the neophyte British director (Steve Coogan) at the helm to take drastic measures. They plan to force that imitation of life to be more than imitation, dropping their cast--which also includes hip-hop soda impresario (say it out loud) Alpa Cino (Brandon T. Jackson) and gawky newcomer Kevin Sandusky (Jay Baruchel)--into the middle of the jungle, where hidden cameras will capture them trekking through the bush while avoiding the wicked firepower doled out by crazy munitions man Cody (Danny McBride, stealing another show a mere week after Pineapple Express).

Only problem is, the attempt to use reality to create the illusion of "war is hell" ends up getting a little too real. Stranded on their own, and trespassing across the poppy fields of the local drug cartel, the actors are now caught in an actual conflict that they still think is special effects set-up, digging themselves deeper and deeper into trouble before actually having to man up and take on the bad guys all on their own.

It's a crazy concept, and one that doubles back on itself so much, Tropic Thunder could have become a knotted mess had the wrong cooks been let into the kitchen. Instead, Stiller, who co-wrote the screenplay with actor Justin Theroux (Mulholland Drive and Etan Coen (who wrote Idiocracy, and is not to be mistaken for a Coen Brother), has a firm grasp on what he is trying to do here, and somehow he keeps it all straight. At times, he veers off on a silly Stiller tangent, going more towards a Zoolander-style spoof than incisive satire, including an instantaneous switch over to "jungle crazy" when his character is stranded on his own or the long dialogue sequences about method acting that may be a little too "inside baseball" for anyone who hasn't sat through multiple seasons of Inside the Actor's Studio, but he always manages to jump back before going off the rails.

That same attention to detail that could overwhelm the picture also works in the movie's favor, making Tropic Thunder a sort of compatriot to films like Hot Fuzz and Pineapple Express. These are movies about the love of the cheesy action films many of us grew up on, using the comedies as a disguise to get away with making their own version of that thing they so adore. It's an endeavor that requires a nerdy obsessiveness. Even the names have some importance. Downey plays Lazarus playing Osiris, the man who rose from the dead playing the Egyptian god of the dead, with a character arc about rediscovering one's true identity. It's like a comparative literature grad student decided to rewrite Commando. (Of course, there are also guys named "Cockburn" and "Pecker," so it's not all about the classics.)

Fans of Ben Stiller's old TV show know what a crafty eye he has for over-the-top parody. (Remember Eddie Munster starring in Cape Fear?) The best stuff in Tropic Thunder is when he goes after the movie industry with both guns, skewering such Hollywood conventions as the "magical retard" and other Oscar-baiting tactics. Both Robert Downey Jr. and Jack Black are having fun at the expense of their own self-image. Black's Jeff Portnoy is a kind of cross between Adam Sandler and Eddie Murphy, with maybe a little of Andy Dick's drug mania tossed in. (Or even Downey's.) To hear the man who made Nacho Libre bemoaning that the laughter he inspires doesn't come with more respect is seasoned with a kind of delicious irony. So, too, does Downey's speech about being found in a cardboard box pretending he's Neil Armstrong after filming a biopic about the astronaut strike pretty close to the actor's home. His performance as the delusional thespian who has buried himself so deep he's forgotten his own identity is nothing short of astounding. Stiller even let's the racial debate flare between Lazarus and Alpa Cino, who also adds to the movie's themes by having his own secrets.

In addition to the leads, Tropic Thunder is sure to draw a lot of attention for its host of cameos. Stiller peppers his film with people like Maria Menounos and Jon Voight playing themselves, but he also fills supporting roles with some surprising faces. Matthew McConaughey actually manages to play slimy convincingly as Tugg Speedman's agent, but the true surprise is Tom Cruise letting out his silly side as billionaire studio chief Les Grossman. Sporting a beard, bald cap, and oddly disproportionate fat suit, Cruise recaptures some of that lethal energy he brought to P.T. Anderson's Magnolia and then cuts loose with it, clearly having a ball ranting and raving from underneath the ridiculous costume. Normally, it's the kind of outfit Stiller would put himself in, but for once the actor sticks to just being who he is. It's a smart move, especially after the shots Tropic Thunder takes at Eddie Murphy for The Klumps.

All in all, Tropic Thunder isn't an entirely consistent comedy. I laughed a lot, but I also did have stretches where I wasn't laughing much at all. I wasn't bored, per se, but there are some tonal divots that maybe try too hard to add in the smarts or Apatow-like pathos. When what you're making fun of is dumb through and through, you don't have to work that hard to prove you're brighter than the source material. Thankfully, Tropic Thunder really hits its stride in the final third, and it's nonstop yuks all the way to the ingenious closing credits. Factoring in that the movie has one of the best cold opens I've ever seen, then that means Tropic Thunder finishes just as strong as it began, and that's really saying something.