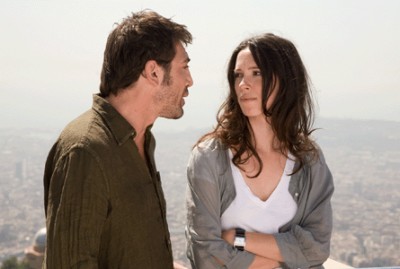 Woody Allen continues his unmatchable pace of making at least a film a year with Vicky Cristina Barcelona, a complex and thoroughly entertaining examination of the vagaries of love. That the seventy-two-year-old writer/director still has something to say about the subject is impressive enough in itself, but the fact that he manages to express himself through two twentysomething women makes the feat all the more stunning.

Vicky (Rebecca Hall, The Prestige) is a grad student who is writing her masters thesis on Catalan culture, and she's decided to spend a year in Barcelona to absorb it firsthand. Joining her on the trip is Cristina (Scarlett Johansson, Allen's muse in Match Point and Scoop), an artist struggling to find her voice. Film is the discipline Cristina has most recently abandoned, and she now flirts with poetry and photography as a replacement. The girl knows she has things to express, she's just not sure how to do it. Cristina is the impulsive, flighty one of the pair, while Vicky is level-headed and analytical. She's also engaged to Doug (Chris Messina, Made of Honor), a successful business man who shares her views about a well-structured life.

Enter the mysterious and possibly volatile painter Jose Antonio (Javier Bardem, having ditched his No Country for Old Men haircut). He immediately attracts Cristina's attention, and she his, but he also comes with whispered stories about a fiery marriage that ended with him being stabbed. This is enough to send Vicky running the other way, but when Jose Antonio offers the girls a weekend away, seeing the sites in a remote Spanish city and possibly making love, Cristina accepts for the both of them.

Allen is taking one of those classic "summer relationship abroad" stories--what happens in Barcelona stays in Barcelona--and using it as his platform to ponder what love means to each of his college chums. How they try to order their lives may not necessarily hold sway when it comes to matters of the heart. Though Vicky instantly rebukes Jose Antonio, circumstances line up to make sure she's the first one in his arms. Over the course of the movie, the seducer will end up with Cristina the longest, but the passion he shared with Vicky will always bring the two back together. The girls swap positions, like the leads in a light romantic remake of Bergman's Persona. The places that they intersect are where Allen finds his meaning, showing these seemingly opposed women are the same in not really knowing what they want.

In between Vicky and Cristina, and by her very nature making them appear to be the picture of sanity, is Jose Antonio's hot-blooded ex-wife, Maria Elena (Penelope Cruz, Volver). As a couple, Jose Antonio and Maria Elena represent a romantic cliché, the two lovers meant to be together forever but whom can't be because of tragic flaws in their personalities. As it turns out, Cristina is the ingredient their previous affairs have lacked, and she works as a mood stabilizer, a conduit for the love that keeps the magnetic forces of their attraction from repelling one another. This is where the much buzzed about liplock between Cruz and Johansson comes in, though settle down, tiger, you likely got more action at your first high school dance than you are going to see here.

For Allen, this relationship is not about sex, but about an expression of something more meaningful. Hence, all of the characters have their creative lives inextricably linked to their romantic lives in a kind of cat's cradle of art and romance. Maria Elena accuses Jose Antonio of stealing her style, yet the two of them are better painters when they are together, one's vision beginning where the other's ends. They also encourage Cristina's photography, much in the same way Jose Antonio encourages Vicky to pursue her happiness. Granted, this is Woody Allen, so these actions will have moral consequences, but without too much heavy philosophical debate. 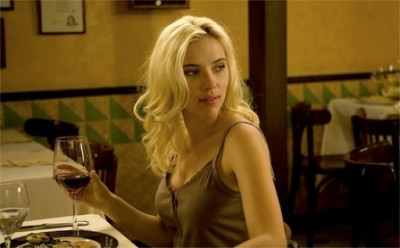 Vicky Cristina Barcelona moves at a brisk pace, light on its feet and engaging the audience in its discussion without getting overbearing about it. If there is one thing that has impressed about Woody Allen's more recent output is the tremendous control he exerts over his camera. His storytelling style gets increasingly more efficient, taking the most direct route to his destination without taking detours into unneeded exposition. In fact, this time around Woody Allen even uses an omniscient narrator, voiced by actor Christopher Evan Welch, to dole out explanations where necessary, allowing the director to jump straight into the story and move quickly over transitional moments. This enables him to pack a lot of story into a ninety-six minute running time. It also helps that he has casting down to a science at this point. Bardem, Cruz, and Johansson are all predictably wonderful and perfect for their roles, yet it's Rebecca Hall that ends up running away with the show. Her portrayal of Vicky is both beguiling and frustrating, her ability to be both open to experience and stubbornly blind to it likely to pay off when she plays Emily Bronte in a forthcoming biopic. If nothing else, Hall should make that film worth watching.

As the 1990s wore on, it became fashionable to dismiss Woody Allen as being irrelevant, but ever since 2004's Melinda & Melinda, the filmmaker has been churning out a steady stream of alternately contemplative and playful pictures that have increasingly made the critical dismissal itself irrelevant. Vicky Cristina Barcelona may be the best so far, by virtue of the fact that it combines both sides of Allen's narrative coin, looking at the what fuels the pleasures of love without forgetting to still make them pleasurable. It's a wonderful little movie, a summer vacation via cinema. It should inspire Sex and the City-style questions of, "Which are you? A Vicky or a Cristina?" As a viewer, be both, and open yourself up to this particular filmic experience.