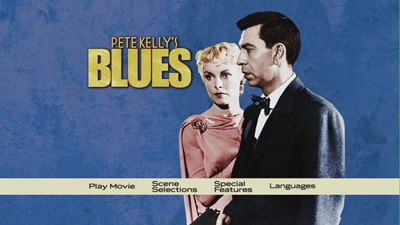 Holy smokes! This is my 500th review for DVD Talk. I know some folks reading this will be astounded that one man can be full of so much crap that he still hasn't run out of it after two-and-a-half years of slinging it around, but frankly, I'm just getting started. Time to start the second 500...

Dragnet star Jack Webb directs and stars in Pete Kelly's Blues, a 1955 melodrama celebrating Prohibition-era jazz. Set in Kansas City in 1927, Webb plays the title role, a horn player who leads his band through nightly gigs at a pizza parlor speakeasy. He's got a pretty tight crew, including his army buddy Al (Lee Marvin), who has seen him through thick and thin. Brace yourself, boys, because it's about to get thick again!

Local mobster Fran McCarg (Edmond O'Brien) has decided to get into the entertainment business, and one of his first clients is going to be the Pete Kelly band. The terms: 25% of the take and a seventh night of work in one of McCarg's own joints. It's a terrible deal, and Pete wants nothing to do with it. Standing up to the gangster is no good, however, and Pete's young drummer (Route 66's Martin Milner) gets gunned down for shooting off his mouth. The band is willing to back Pete, and a straight-laced cop (Andy Devine) offers him an opportunity to help dismantle McCarg's operation, but Pete decides it's better to give in. This doesn't necessarily make it any easier, either. McCarg is demanding, forcing the band to take on an alcoholic singer he's obsessed with. Rose (the great Peggy Lee) is one more breakdown away from being totally broken, and McCarg treats her rough. How much damage does the bad guy have to dole out before Pete toughens up? 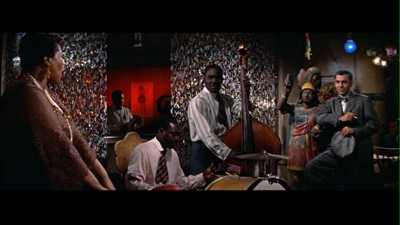 Recently I reviewed Anatole Litvak's 1941 musical Blues in the Night, and I noted how that film's depiction of the jazz scene was significantly lacking in African American faces. Pete Kelly's Blues isn't much different, though Jack Webb earns himself quite a bit of credibility by casting not just Lee, but giving the legendary Ella Fitzgerald a small part and even having her sing the movie's title track. Fitzgerald's role as Maggie Jackson also serves as a bit of subtle explanation as to where the black musicians have all gone. Maggie runs a roadhouse outside the city, and without having to point it out, attentive viewers will realize that this side of the music scene has been segregated from the white folks who party down in the heart of town (or the ones sitting in the moviehouse, as it were). In fact, Maggie's marginalized club is sharply juxtaposed to the one where Pete Kelly regularly plays, which is brighter and more lively. Out of that pastel setting comes the love interest, an alcoholic rich girl (Janet Leigh) who wants to pitch woo with the horn player. To her, life lacks both seriousness and consequence, whereas Maggie's is where you go when you're in trouble.

The music in Pete Kelly's Blues is the main reason to watch the movie. Any motion picture with both Peggy Lee and Ella Fitzgerald is going to have a spectacular soundtrack, and unlike in Litvak's movie, Webb actually casts a real band to play his fictional one. Matty Matlock and His All Stars back the hornblower up on stage, and they keep things hopping throughout the film.

Which is good, because Jack Webb's directorial style is comparable to his onscreen image. His oft-parodied staccato speech pattern wasn't just an act he put on for Dragnet, that was his basic performance technique. Webb makes for a very bizarre leading man, all hunched shoulders and starched shirts. He leaves traces of that starch wherever he goes, and the script by Richard L. Breen (Niagara, The FBI Story) could have used a little more zip in the execution. As a story, Pete Kelly's Blues has some edgy social commentary, but it's more of a sudsy melodrama than a two-fisted crime picture, and Webb's direction is often as straight-ahead as his line readings. Though he occasionally shows a real eye for frame composition and how to move his camera around, particularly in the climactic shootout in McCarg's dancehall, Pete Kelly's Blues too often comes off like a record playing at the wrong speed. The high drama, romance, and violence should be at 78 rpm, but the turntable is stuck on 33 1/3.

Still, fans of these kinds of Prohibition stories and connoisseurs of the music will want to give the movie a spin for the Technicolor settings and the chance to see two of the greatest-ever female jazz singers on screen. Jack Webb clearly has affection for the subject, and so he gives it a good enough try that Pete Kelly's Blues manages to be thoroughly watchable. It's just hard not to wish he'd eventually taken the lid off and really started to jam. He's like the guy who runs the pizza joint where the main character plays, constantly watering down the whiskey until it would take a gallon of the stuff to even get buzzed. 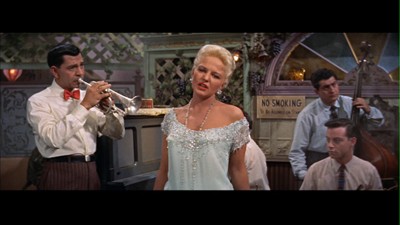 Video:
Pete Kelly's Blues is shown in a very wide widescreen aspect ratio. Though no technical specs are listed on the packaging, the flick was shot in 2.35:1 Cinemascope, and it looks like that is preserved here. It's a rather spectacular transfer, with good colors and sharp resolution. A few times I did see some barely discernible grit, but unless you're watching for it, you may not even notice.

Sound:
Warner Bros. does the smart thing with a movie like this, and they have gone all-out to spruce up the old audio and give it a Dolby 5.1 remix. The sound is excellent, with a lot of attention paid to the music; thankfully, the audio team didn't go overboard, either, and they don't employ a bunch of anachronistic effects. It's a really conscientious mix that gives the soundtrack its full due without overpowering the original intentions of the filmmakers.

Extras:
Two Warner Bros. shorts are included here, both of which have a theme of new technology gone wrong, which has nothing to do with the main feature, but hey, at least they go together well. Most likely the reason for choosing these is they both came out in 1955, and hence could have been seen with Pete Kelly's Blues at the theatre. The first is the ten-minute Oscar-nominated live action comedy Gadgets Galore, humorously examining the advent of such inventions as the motion picture and motorcars and their effects on rural Americans. The second is a Warner Bros. cartoon, "The Hole Idea," directed by Robert McKimson and featuring a scientist and the trouble he gets into with his new creation: the portable hole.

FINAL THOUGHTS:
Rent It. There are some great things in Pete Kelly's Blues. The sets are excellently designed, and the music is hopping. Performances by Peggy Lee and Ella Fitzgerald feature them showing off their legendary pipes, and Lee in particular distinguishes herself as the rundown torch singer with a drinking problem (she earned an Oscar nomination as Supporting Actress). The script, however, is fairly standard for this kind of story, dulling its edge with soapy melodrama. This softening isn't helped by Jack Webb, who as director and star brings a rather placid mood to the whole thing. Worth a look, but you likely won't be calling out for too many encores. 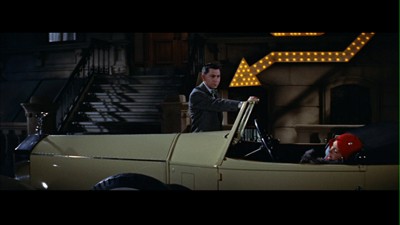