Genius Products // Unrated // August 5, 2008
List Price: $39.99 [Buy now and save at Amazon]
Review by Stuart Galbraith IV | posted August 17, 2008 | E-mail the Author
As a movie genre, Westerns were pretty much dead by the late-1970s. Audiences seemed to lose interest in such films, and high-profile, costly flops like Heaven's Gate and The Legend of the Lone Ranger put the final nails in the coffin. With its short list of genre iconography and restricted to a very specific time and place, by the end of the seventies filmmakers had seemingly exhausted every conceivable theme, stylistic approach, storyline and Western character many times over. What was there left to say that hadn't been said a hundred times before?

And then along came Lonesome Dove, the 1989 adaptation of Larry McMurtry's Pulitzer Prize-winning novel, a project bridging an older style of theatrical Western and its accompanying characters with a format absolutely ideally suited for the material: long-form television, the miniseries. It's a beautifully done tapestry, epic and intimate, funny and almost unbearably tragic, full of adventure, romance, and romanticism - and likely to make the toughest of tough guys in the audience cry like a baby.*

For Blu-ray, Lonesome Dove has been reformatted to 1.78:1 widescreen from its original 4:3 television airings. I'm generally against this practice but in Lonesome Dove's case it actually seems to improve rather than damage the original compositions, and compared with how the film has looked before now, the high-def transfer is nothing short of a revelation. The extra features are plentiful and generally good, though it's all old stuff. 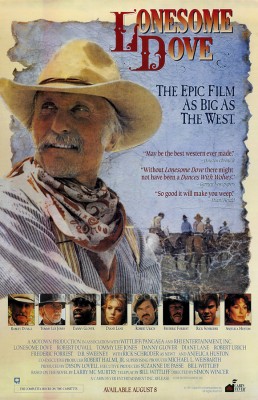 Sometime after Custer's Last Stand, Gus and Woodrow, inveterate ramblers, decide to leave their tamed, two-bit home of Lonesome Dove, Texas to become cattle ranchers in Montana, one of the last remaining frontiers of the America West. The methodically-told story carefully and intelligently integrates numerous major and minor characters: Jake Spoon (Robert Urich), a ne'er-do-well former ranger with a roguish personality looking for trouble and who promises to take Lorena with him to California; Newt (Ricky Schroder), the unacknowledged bastard son of Woodrow and a late but fondly-remembered prostitute; Deets (Danny Glover), former slave and scout on the drive, one of the few men Woodrow openly respects; and July Johnson (Chris Cooper), a sheriff whose selfish, pregnant wife, Elmira (Glenne Headly) has run off in search of her outlaw boyfriend.

Structurally, the novel and its faithfully adapted series are somewhat reminiscent of the teleplays of British dramatist Dennis Potter (high praise!) insofar as characters tend to weave in and out of each other's lives in a broadly cyclical manner before naturally falling into their rightful place (or succumbing) by the final scenes. The story had its roots in a screenplay called Streets of Laredo, a collaboration between McMurtry and writer-director Peter Bogdanovich (presumably in the wake of their success with The Last Picture Show) that was to have starred John Wayne, Jimmy Stewart, and Henry Fonda. When that fell through, McMurtry retooled the basic story as a novel eventually published in 1985.

The best thing about the miniseries is its extreme length - some six hours and thirteen minutes, spread over four movie-length episodes - which allows for the kind of detailed characterizations nearly impossible to achieve in a two-hour-plus movie. Here, even minor characters like Pea Eye Parker (Timothy Scott), a not-so-bright contemporary of Gus and Woodrow's, become rich, three-dimensional characters. In the movies, filmmakers resorted to a kind of shorthand, casting instantly recognizable character actors known for playing certain Western types.

By about the end of the first episode, the carefully introduced characters completely hook the viewer into the adventure, and as the cliché goes by the end they've become something almost like intimate friends. Also working in the series' favor is its period authenticity: teleplay writer William D. Wittliff (The Black Stallion) and Australian director Simon Wincer (Phar Lap, The Lighthorsemen) retained McMurtry's historical details and the show has an unusually authentic, gritty air about it, of a frontier life brutally, almost indescribably harsh. (The miniseries has a grim but realistic mortality rate.)

Looking at it now, it's hard to imagine that the entire show was filmed in just six weeks; that's about 10 days per episode. And yet its handsome production belies its television origins, and the acting all around is superb. Criminally, it won no Emmy Awards in any of the acting categories; clearly this was because there were so many terrific performances everyone ended up canceling each other out at the Awards: Duvall went up against Jones, Huston and Lane were nominated together, while Glover and Headly lost to other performers. (The series did win numerous other awards, however.)

Lane and Huston are wonderful, but it's really Duvall and Jones that stand out most, beautifully playing contrasting characters. Duvall is like an adult Western version of Hopalong Cassidy: the wise, elder statesman cowboy everyone looks up to and turns to for a kind of frontier philosophy, and whose bravery is peerless. Jones is perfectly cast as the hardened, reticent Woodrow, a stubbornly unexpressive, often surly man who in sharp contrast to Gus never seems to enjoy life very much.

There have been, probably, several hundred Westerns about a cattle drive; except maybe for Howard Hawks' Red River, none is better than Lonesome Dove.

Television programs shot 4:3 standard size have been reformatted to 1.78:1 widescreen with mixed results: it proved a disaster with Route 66, looked okay if occasionally problematic with Star Trek, not bad for the most part on Kung Fu, etc. Looking at the 4:3 standard size clips of Lonesome Dove included in the making-of featurettes, I was surprised to find that, while some picture information definitely is lost in the reframing to widescreen, the 4:3 compositions generally looked cramped and unbalanced, while in 1.78:1 widescreen not only did the show's epic story, scope and picturesque scenery benefit, but even ordinary two- and three-shots of the actors sitting on their horses, or around a table in some saloon seemed better-composed. It's possible the show was produced with an eye on a theatrical release in foreign markets and may have been shot with 1.85:1 cropping in mind, but possibly not. Whatever the case, the new framing almost never draws attention to itself; ironically, the 4:3 framing seems more cramped than it does in widescreen.

The older 4:3 clips also dramatically contrast the show as it looked in 1989 with the new 1080p high-def transfer, which is a real beauty. The transfer really gives the series a movie-like sheen. The production never feels cheap, but now with the transfer the outdoor vistas and period details of the interior sets and costumes really come through. The film itself seems to be in excellent shape, much more than you'd expect from the older transfers; color and contrast are vastly improved; even the opticals (dissolves, main titles, etc.) look quite good.

The 5.1 Dolby Digital mix leans a bit heavily on the sound effects, which at times teeters on drowning out some of the centered dialogue. Generally the remixed sound is excellent though, showing off the discrete sound effects and bringing out Basil Poledouris's award-winning score to good effect. Optional English subtitles are available.

The supplements run about the same length as one of Lonesome Dove's episodes. It's all older material dating back to around the time the show aired (director Simon Wincer appears in a newer but apparently not new interview), featuring most of the cast on-set with Duvall, Lane and few others filmed on their day off, or maybe after the show was in the can. The 50-minute Behind-the-Scenes featurette plays too much like a promo film, although the interviews offer occasional bits of insight. There's an Interview with...Larry McMurtry videotaped with surprising amateurishness, the kind of thing that would never pass muster today. The newer interview with Wincer, and similar footage following him around as he looks at Original Sketches and Concept Drawings is somewhat informative, but the greatest of the miniseries really begs the creation of an entirely new, first-class documentary from Laurent Bouzereau, or someone with the skill to really do it justice.

This is a real must on Blu-ray, a title just about everyone will want to see and will never forget, a series that despite its television origins can proudly stand alongside the best movie Westerns. The Blu-ray presentation greatly enhances the viewing experience, and while the extras are old and overly PR-flavored, they're plentiful and have their own little nuggets of good material. A DVD Talk Collector Series Title.