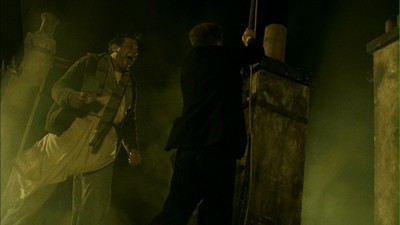 The joy of watching a Jean-Pierre Jeunet movie is in the complete, unique world he creates on screen. Even when he's portraying WWII France (A Very Long Engagement) or modern-day Paris (Amelie), his vision of these places is skewed to his own design in such a way that they appear as other-dimensional alternatives to the actual places. This trait was present in his films right from the beginning, and is arguably even more pronounced for the fact that the settings for these early stories are completely abstracted from the familiar.

Jeunet's 1991 debut, Delicatessen, co-directed with Marc Caro, shows us a vision of one building in an unnamed French village at an unspecified time. Life has fallen on hard times, so much so that a leading paper is actually called Hard Times (a nod to Charles Dickens?), and it is the avenue by which our hapless hero, Louison (Jeunet-mainstay Dominique Pinon), is lured to the deli at the building's base in search of a job. The deli, and the boarding house above it, is run by Clapet (Jean-Claude Dreyfus), who somehow manages to keep his cupboards full despite a worldwide food shortage. Consumables are so rare, lentils and corn have replaced paper money and coins.

The big secret of Clapet's supply line is that he regularly hires new handymen for the building, and each of these ends up as a feast on his butcher's block. All of his eccentric tenants are in on the cannibalism, including the suicidal housewife, two men of an ill-defined relationship who make toys that simulate the moos of a cow, a hyperactive family of four, and a man who keeps his apartment damp in order to breed snails and frogs. Also living in the building is Clapet's daughter, Julie (Marie-Laure Dougnac), a sweet soul who plays the cello and buys two of everything because her terrible eyesight leads to her destroying most of her possessions. She's having second thoughts about her father's business model, and when Louison--a former circus clown who lost his monkey to a ravenous mob--shows her kindness, she can't accept his heading for the dinner table. She enlists an underground organization of food rebels called the Troglodytes to rescue Louison, culminating in an insane night of slapstick and violence with everyone trying to stay one step ahead of the cleaver.

Delicatessen is a weird movie through and through, but unlike a lot of quirky indie fare, the weirdness is never forced. Part of the reason for that is Jeunet and Caro's good sense to build their city from the ground up; another is their innate talent for visual invention; a third is their twisted sense of humor. It takes an especially morbid streak to see the laughter in cannibalism and build a romantic yarn around it. Once the directing team put all of these elements together, something spectacularly different and altogether fun came out of it. Darius Khondji's camera zooms through the apartment building, up and down the stairs, through the pipes, peeking in on each and every tenant. Jeunet and Caro have an obsessive eye for detail, packing the screen with small touches of delightful cleverness. By the same token, the sound effects are practically fetishized, cranked up to a high volume and squeezed for every juicy note.

Though Delicatessen has a plot situation that would be right at home in an oddball sci-fi movie by other kooky directors like Terry Gilliam, the look of the movie has a syrupy nostalgia for the early days of television. All of the TV sets the characters watch are out-of-date models, and the programs they view all have a bygone innocence, usually nonsequitur song and dance numbers that play in ironic juxtaposition to the main action. (In one scene, as some of the supporting players dole out a little needed exposition, the black-and-white picture tube behind just shows the word "Interlude" with accompanying music; a fun little meta gag.) This fits in with Louison's former job, and the sad sight of the empty bandleader's uniform once worn by the deceased monkey ends up being a symbol of lament for a lost time. The schism in the world is much less about the days when there was food vs. when everything stopped growing, but more about a time when people were good to one another and enjoyed laughing at simple things vs. now, when anyone who wanders out on the stairs at night is fair game.

Jeunet and Caro also love gadgets, and part of the fun of having a movie like Delicatessen on DVD is that you can watch it again and again and find things you may not have noticed before. From Grandma's rigged yarn recycler to Julie's disguised communicator for getting in touch with the Trogs and the Rube Goldberg set-ups that the suicidal lady concocts to get others to do her dirty business for her, there is always something to look at in Delicatessen. The brisk pace of the story rarely pauses to catch its breath, and so multiple viewings are practically required to keep up with all that's going on. 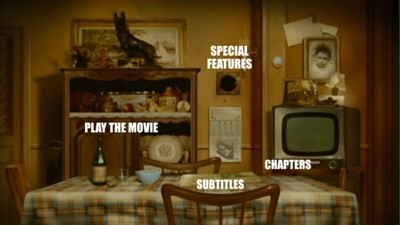 Of course, a love of gadgets is something DVD fanatics can appreciate, always looking for the newer, better disc and for a newer, better machine to play it on. Delicatessen was one of those long-lost movies that was always on wish lists for future DVD releases but that surprisingly never materialized until 2006, a scant two years ago. I was somewhat surprised to see it coming around again so soon, though this time courtesy of Lions Gate and not the Weinsteins at Miramax. The design of the packaging looks a lot like the design for Lions Gate's Meridian Collection, and even though trailers for that line of foreign movies play as the disc loads, there is no indication that there is any connection between them. By DVD Talk's previous scoring, the Miramax disc received rather high marks (Ian Jane's review is here). I never picked up the old edition for some reason, so there are no complaints about having new access from this camp. Yet, the question of the hour, is it worth a double dip?

Video:
The new edition of Delicatessen features a 1.85:1 anamorphic transfer that is excellent from start to finish. I didn't notice any ghosting, pixilation, or any other of the normal problems that set off alarms for DVD viewers. I can't say if this is the same transfer as we got in 2006, but it's at least of equal quality if not slightly better.

Sound:
Edited 8/25/08: The one obvious upgrade here was supposed to be a new 5.1 Dolby Digital mix on the French audio, which is advertised on the box, but as a reader has correctly pointed out, there is no audio selection on the menu and if one looks at the audio selection as it feeds through one's player (in my case, toggling the audio button through the two audio tracks), it registers as a 2-channel mix. Something is fishy here, and though I suppose it's possible the disc is authored incorrectly and outputs false info, most likely the box is incorrect and there is zero upgrade on this disc at all. I'm sorry I trusted the packaging the first time, and I'll update again if any official explanation comes DVD Talk's way.

The existing mix, thankfully, still sounds excellent, with nice interplay between all the speakers and a good balance in some fairly noisy scenes. For a film like this where sound effects play an integral role in the action, good audio mixing is key. This DVD nails it.

There are subtitles in English and Spanish (one more language than the Miramax release). I found these to be well paced and nicely written.

Extras:
Often when a film changes companies, the extras from the early disc get left behind, as the originating studio retains copyright. Not so here. The Miramax disc originally took all of their extras from a British release that had come out a few years prior to the North American edition, so it should be no surprise that these are still floating around. All of the old extras from 2006 are here, and no new bonuses are added. This means the only obvious upgrade on the Lions Gate DVD is the audio quality. I am betting a lot of you are recoiling from the double-dip even as I type this. 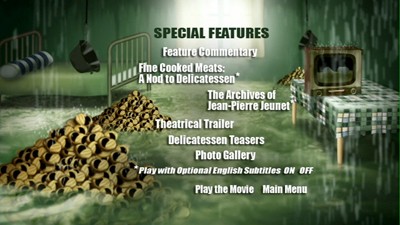 The included extras are as follows:
* Audio commentary by Jean-Pierre Jeunet, in French with English subtitles.
* "Fine Cooked Meats: The Making of Delicatessen," a thirteen-minute documentary showing the directors in action, including how they achieved the look of the movie.
* "The Archives of Jean-Pierre Jeunet," nine minutes of screen tests and rehearsal footage.
* A theatrical trailer and teasers for Delicatessen.
* A photo gallery.

Delicatessen is packaged in a standard plastic case with a cardboard outer slipcover.

FINAL THOUGHTS:
Despite being a fairly pointless double-dip, this new DVD of Delicatessen is Highly Recommended. A good disc is a good disc, and a good disc of a good movie like this one can't be passed up. If you already own the old version, then you know this, and you've done your job, be content with being ahead of the pack. If not, then what are you waiting for? This oddball, darkly comic tale from Marc Caro and the visionary director Jean-Pierre Jeunet is a gonzo depiction of a world where folks are forced to find alternative food stuffs and end up finding one another in the process--both in a romantic sense and in a totally non-romantic cannibal sense. Visually exciting and buzzing with a quirky energy, this slapstick-heavy film only gets more surprising with age. A must-have. 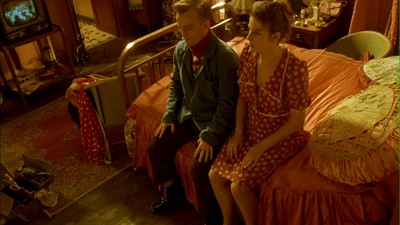