Levi's repatriation was complicated because the Soviets combined the few Italian Jewish concentration camp survivors in with the much more numerous Italian prisoners of war who had been captured alongside the Germans fighting in the East. Consequently, once Levi was mixed in with the POWs he was at the mercy of Soviet authorities who were considering sending the POWs to rebuild war-ravaged Soviet Ukraine. While the wheels of the bureaucracy slowly turned, Levi's train was frequently stopped or moving away from Italy. At last though, the Soviets decided to repatriate the Italians, and in October of 1945 Levi was finally home. 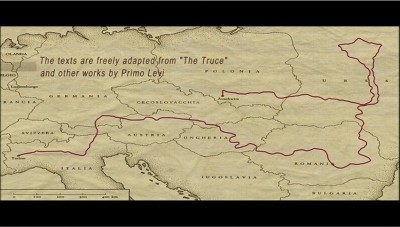 Excerpts from Levi's memoir, read by Chris Cooper (Adaptation), impart some sense of his experience on this long journey. Yet, the picture is so narrowly focused and thinly constructed that we're given little idea of who Primo Levi was apart from this nearly 10-month episode which in itself is still rather thin. In fact, so circumscribed is the historical biography of Levi provided by this road doc, one might conclude that he has no significance apart from supplying a handy, but ultimately arbitrary road map for exploring the modern sociopolitical landscape of Europe. If so, then the excerpts from Levi's memoirs while interesting in themselves are merely a distraction from an already over-sized agenda.

In following Levi's circuitous journey through what is now Poland, Ukraine, Belarus, Moldova, Romania, Hungary, Slovakia, Austria, Germany and Italy, Ferrario episodically considers the state of contemporary Europe. In Poland, film director Andrezej Wajda guides Ferrario through a rusting steel works that Wajda thinks would make a fitting museum to Communism. In Ukraine, Ferrario documents a growing anti-Russian nationalism following the murder of a folk singer by a pro-Russian thug in 2000, and he visits the eerie ghost town of Prypiat, abandoned after the reactor meltdown at the Chernobyl nuclear power station. Belarus appears to be little changed following the collapse of the Iron Curtain, with agriculture still collectivized and outsiders viewed with deep suspicion. Meanwhile, Moldavia is caught in grinding poverty, though things look brighter in Romania and Hungary thanks to Western investment. Though the West has its own problems brewing as indicated by a neo-Nazi rally in Munich. These episodes are frequently interesting on their own, but as a whole they're so anecdotally scattershot as to be incapable of substantiating any coherent inferences whatsoever. 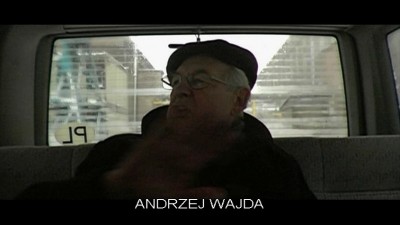 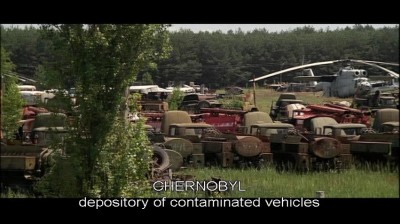 The DVD
Video:
Primo Levi's Journey is presented in its theatrical 2.35:1 aspect ratio, and is enhanced for widescreen. Incorporating archival material along with 35mm film and mini-DV of contemporary Europe, the picture quality varies considerably. While generally good, much of the mini-DV material is too dark, but what really sinks this one though is not the variable quality of the source material, but rather the poor quality of the DVD transfer. The PAL-to-NTSC conversion is poorly done leaving significant ghosting on the interlaced image. 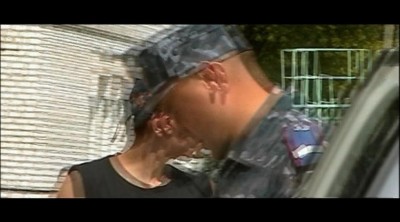 Audio:
The 2.0 audio sounds good. Dialogue is clear and distinguishable above the jazz score.

Extras:
The only extra provided is an interview with director Davide Ferrario and screenwriter Marco Belpoliti in which they speak a bit about the making of the film, but mostly talk of their admiration for Primo Levi (13:16). Rather than reserve this for the extras, more of this sort of material in the film would have been helpful.

Final Thoughts:
Primo Levi's Journey is an overambitious effort to combine the story of author Primo Levi's journey from Auschwitz death camp in Poland to his home in Italy, together with scattershot anecdotes about the sociopolitical state of contemporary Europe. While much of the material is interesting, neither Levi nor contemporary Europe are considered in sufficient detail to be of any real import.