THE MOVIE:
"She reminds me of the first woman that ever slapped my face." 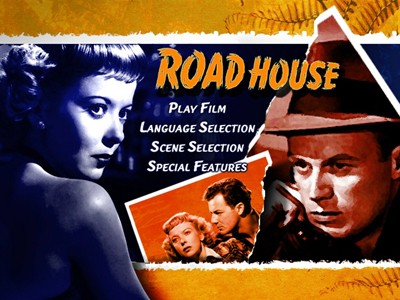 It's too bad that this 1948 crime picture has to share its title with a Patrick Swayze movie, because it just seems wrong that a well-made movie like this would ever be confused with wrongfully venerated crap like that.

Directed by Jean Negulesco (Humoresque) from a script by producer Edward Chodorov (Undercurrent), this Road House is a solid noirish tale about backwoods romance and double-crossing. Rock-jawed good guy Pete Morgan (Cornel Wilde) runs a nightclub near the Canadian border for his childhood pal Jefty Robbins (Richard Widmark). Jefty is a spoiled rich kid who never grew up, and whenever he goes traveling to the city, he falls in love with a saloon singer that he tries to import to his road house, usually with sour results. This time he has returned from Chicago with smoky-voiced Lily Stevens (Ida Lupino), a down-on-her-luck siren looking for a break. Booze and cigarettes and likely quite a bit more hard living have done a number on her voice, causing her rival, the sweet and blonde small-town girl Susie Smith (Celeste Holm) to quip that Lily sounds good "if you like the sound of gravel."

Well, turns out that the town does like gravel in their ears, as Lily is a hit. Lupino, doing her own singing, imbues the torchy piano numbers, which include "One For My Baby (And One More for the Road)" and "Again," with every lesson her character has learned in life, and the resulting weariness lends a surprising emotional depth to the material. She sounds like Peggy Lee with a hangover, and it works. Though Pete originally tried to send the girl straight back out of town, he comes around when he sees the reaction of the patrons, and even more so as Lily begins to reveal more of herself. In the battle of the sexes, poor Susie doesn't have a prayer. Lily knows all of the hometown gal's moves, and she can easily do her one better.

Naturally, Pete and Lily get together, and the only one who can't see it coming is Jefty. Despite the constant rebuffs, he thinks the songstress is going to marry him, and when Pete comes clean with the truth, Jefty snaps. Before the new lovers can get out of town, Jefty institutes a demented plan designed to tie Pete to him for good, thus forcing Lily to stick around, too.

The plot for Road House is fairly standard as far as melodrama goes, but Negulesco takes full advantage of his Northern setting to create a kind of log-cabin noir. Sharp suits are traded in for warm coats and brick walls for wood paneling. There is an altogether different specter of death floating above the players than one would find in the big city. Lily refers to the town as a "moosetrap," and there are signs of hunting culture all over the place, from the mounted heads on the wall to the fact that her hotel is called the Antlers. There is an understated bloodlust in the air, and the alleged betrayal occurs when Jefty is away on a hunting trip where he bags three moose--one for himself, one for Pete, and one for Susie. Lily was to share in his stake, the way any gangster's moll would when he returns from a job, the hunting being this movie's equivalent of a bank robbery. This makes it even more fitting that Negulesco and Chodorov stage the climax in the mountains at Jefty's hunting cabin, building to a tense chase through a foggy forest.

Of course, all this drama and window dressing would be nothing without a great cast, and Road House has a pretty stellar line-up. Wilde and Holm deliver solid performances, but the true heat on the screen is coming from Lupino and Widmark. As Lily, Ida Lupino is sharp and full of internal conflict. The actress gives the girl a lot of smarts, but she also seems to be carrying a backstory full of pain and longing. She displays confidence in chasing Pete, but when it's just her and the camera, Lupino also shows desperation, like being rejected by the right guy because he's friends with the wrong one is the last thing she needs (and, honestly, it is).

Richard Widmark's early career is marked with excellent performances as the bad guy, and Road House is up there with the best of them. Like Lily, Jefty carries around a host of past failures, and Widmark manages to show this insecurity while also creating an obvious mask the character uses to hide it. He swaggers and boasts at the best of times, and gets cunning and mean at the worst. With his rat-a-tat laugh, Widmark makes Jefty a real menace. At the same time, he's not afraid to make himself look bad when it all comes unraveled and Jefty becomes a sweating, wheezing mess.

All in all, this Road House is an entertaining picture with some compelling drama and a hint of real violence. While it may not be the overwrought bloodbath that Swayze later gave us, it also doesn't have any feathered mullets either. As far as I'm concerned, that makes it 1948 for the win! 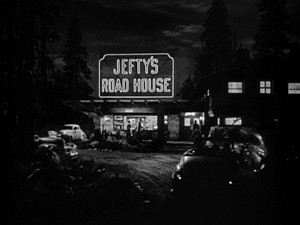 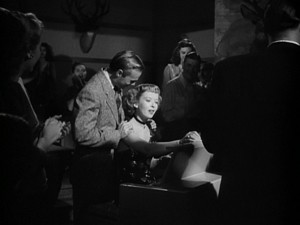 Video:
Road House is shown at a full-frame 1.33:1 aspect ratio. The image quality is largely very good, with no noticeable dirt or scratches. The contrast between light and dark is well rendered, and despite some occasional soft edges, there isn't much to complain about.

Sound:
The English mix is in Dolby Mono, and it is also a fairly solid job. There is nothing special about it, but there are also no glitches, off-tones, or any hiss. The songs sound especially good, with Ida Lupino's voice coming through crystal clear.

Extras:
For longtime followers of the Fox Film Noir line, get ready for a little grousing. Though Road House carries the series banner, the studio has dropped the spine numbering on their latest wave. They have also stopped including the paper insert with liner notes for the picture.

The movie carries a full audio commentary by frequent contributor to the series Eddie Muller, and this time he's teamed up with critic Kim Morgan. The two have a chatty rapport and seem to be having fun discussing the movie, and the added levity doesn't stop the track from being as informative as we've come to expect from the Fox Film Noir discs.

The 19-minute documentary "Killer Instincts: Richard Widmark and Ida Lupino at Twentieth Century Fox" features the same gaggle of commentators as we see on most of the Fox Film Noir discs. The Lupino half is largely concerned with her move away from her Warner Bros. contract and how she used her new-found freedom to choose her own roles, such as Lily in Road House (and later, to direct). For Widmark, they discuss his technique playing the quintessential psychopath, as well as, like Lupino, his eventual need to stretch his acting limbs.

The disc is rounded out by a couple of still photo galleries (Behind the Scenes, Glamour Shots, Lobby Cards & Poster Art, and Publicity Stills) and an interactive version of the original pressbook. There are four trailers for other noir titles from Fox, but not one for Road House.

FINAL THOUGHTS:
Highly Recommended. Road House is an enjoyable, noirish melodrama enlivened by outstanding performances from Ida Lupino as a world-weary lounge singer and Richard Widmark as the owner of the out-of-the-way lodge that is serving as her latest gig. A city mouse visiting the country, Lupino gets things boiling, attracting the attention of Widmark's best pal, played with a good-guy toughness by Cornel Wilde. Once this love triangle begins sharpening its points, Road House turns into a deadly, feverish romp. 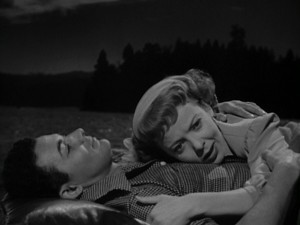 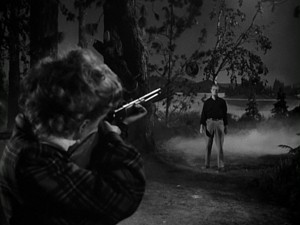