Koch Vision // Unrated // August 5, 2008
List Price: $24.99 [Buy now and save at Amazon]
Review by Don Houston | posted August 26, 2008 | E-mail the Author
Background: Heart is one of my favorite rock bands and has been since the first time I heard the two Wilson Sisters (Ann and Nancy) on AM radio over 30 years ago. With Ann on vocals and Nancy playing guitar, the pair was never shy about trying new things, their music constantly evolving but remaining true to the roots they held so dear. While going through some lean times here and there, their fans have stuck by them far more loyally than record labels, the duo providing a lot of drama behind the scenes but also considered one of the strongest live acts all these years too. Their ballads, rock pop tunes, and straightforward rock all seem to show the kind of emotion the pair is capable of providing, numerous concert performances shot over the years still unavailable on DVD, a problem partially solved by last year's release of Dreamboat Annie: Live. As anyone that has attended a Heart concert will be able to tell you though, each concert is different with the sisters kicking it out differently enough that you cannot go wrong attending on different nights, never mind just different tours. Well, back in July of 2005, the Public Broadcasting System (PBS) series Sound Stage aired the first of two concerts shot on a given night, finally released as Heart Live recently, my quick review of it designed to give you a head's up about what it offered (dedicated Heart fans will already have a copy or two from my experience). 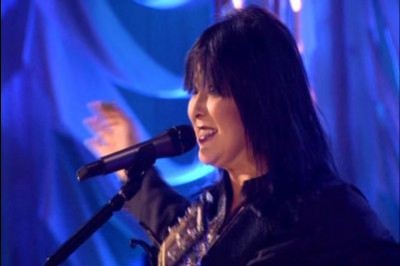 Concert: Heart Live was a long time coming but PBS has always had a difficult time marketing products such as these, sticking so closely to the Sesame Street licensing that has been the bread & butter of the organization (outside of those nuisance charity drives they seem to hold all too often). The concept behind the long time Sound Stage series (that started back in 1974) is best explained via their website that said it like this: "Long before music television filled the airwaves, the WTTW series Soundstage sparked the nation. In an impressive run from 1974-1985, this innovative and prestigious program achieved widespread critical acclaim and featured the artists that defined the era, including such luminaries as Bob Dylan, Aretha Franklin, Bonnie Raitt, Al Green, the Doobie Brothers, Harry Chapin, Dionne Warwick, the Temptations and Kenny Loggins. For all those who loved the original series, Soundstage was reborn in 2001 thanks to a new partnership between WTTW National Productions and HD Ready, LLC. Director (and founder of HD Ready) Joe Thomas' vision was to combine the one-hour musical performances of the original show with state-of-the-art high definition video equipment and innovative Dolby 5.1 audio. The majority of the concerts are filmed before intimate studio audiences at WTTW's Grainger Studio in Chicago, but Soundstage occasionally hits the road. In previous seasons we've taped at Red Rocks in Colorado; the Meyerson Symphony Center in Dallas; the Rialto Square Theatre in Joliet, Illinois; the Genesee Theater in Waukegan, Illinois; the Frederick P. Rose Hall, Home of Jazz at Lincoln Center in New York City; the Rosemont Theatre in Rosemont, IL; Tsongas Arena in Lowell, Massachusetts; the Fleet Center in Boston; the Germain Amphitheater in Columbus, Ohio and Madison Square Garden in New York City among others. Since Soundstage has been reintroduced, performers have included the Dave Matthews Band, John Mayer, Joss Stone, Robert Plant, Wilco, Sonic Youth, the All American Rejects, KT Tunstall, Train, Alison Krauss, Alanis Morissette, Daughtry, John Fogerty and countless more of today's premiere artists." 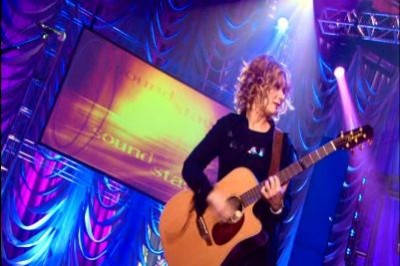 This Heart concert originally aired in two parts back in the summer of 2005, the set list for both the DVD and original order offered below. It struck me as slightly disjointed at times, the result of blending some of the songs to appear as if offered in their original order, but I couldn't fault the choices even if there were a number of songs I would have chosen to add to the list (or replace some that I'm less into). Ann sang as strongly as ever, Nancy played various instruments equally well, and the backup band including all but Ric Markman from the more recently shot concert I enjoyed (Ben Smith on drums, Craig Bartock on guitar, Debbie Shair on keyboards, with Mike Inez replacing Markman). The screens in the background showed everything from fractals to the band name to plugs for the show, the cameras always aggressive about capturing the Wilson sisters doing what they do best. MasterCard was one of the underwriters this time but they were not garishly advertised all over the place thankfully enough. Sonically, the band was in good form and while there were few of the "vocal pyrotechnics" the gals discussed in the interview accompanying the concert (in the extras section), they provided a lot of punch at just the right moments, proving the showmanship crafted over 35 years was still there. 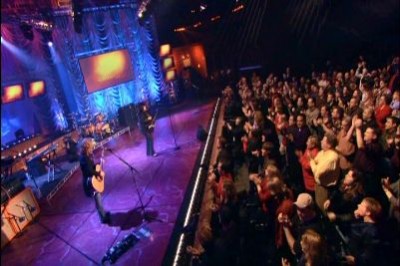 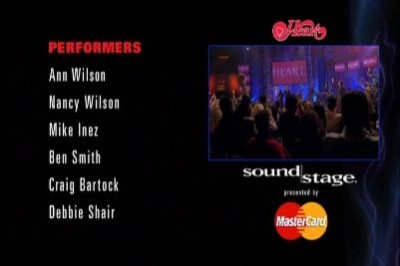 According to the PBS website, the original order the songs were shot in is as follows:
Sand
Bebe Le Strange
Kick It Out
Straight On
Oldest Story In The World
Perfect Goodbye
Love Alive
Battle Of Evermore
Love Song
Alone
Things
These Dreams
Dog And Butterfly
Fallen Ones
Make Me
Even It Up
Lost Angel
Magic Man
Crazy On You
Enough
Barracuda
Black Dog
Misty Mountain Hop 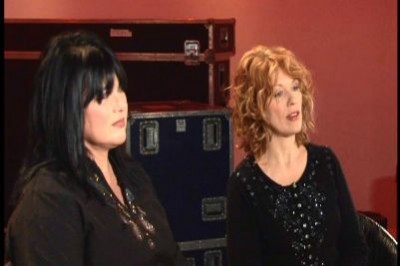 As a comparison, here is the track listing for the more recent concert I reviewed last year for the 2007 concert of Dreamboat Annie: Live:
Magic Man
Dreamboat Annie (Fantasy Child)
Crazy on You
Soul of the Sea
Dreamboat Annie
White Lightning & Wine (Love Me Like Music)
I'll Be Your Song
Sing Child
How Deep It Goes
Dreamboat Annie (reprise)
Then the encore with:
Mistral Wind
Goodbye Blue Sky
Black Dog
Misty Mountain Hop
Love, Reign O'er Me

The concert seemed to be heavy on songs from the then-recently released Jupiter's Darling (no surprise since it came out in 2004 to mediocre sales) and while I personally enjoyed those too, most of them fell short for me compared to some of the missing songs I have long held so dear, not least of which was How Can I Refuse or Never. Still, there was a lot of sonic bang for the buck and Sound Stage has long been a series able to convince me to financially support PBS so I have no problem giving this volume in the award winning show a rating of Recommended. The largely sterile crowd did not impact the production and the technical side of things proved the long standing director was no amateur to the concept so pick up a copy if you enjoy classic rock by two of the biggest names to ever grace the stage.

Picture: Heart Live was shot on HD Video to be offered in this anamorphically enhanced 1.78:1 color widescreen offering as shot by director Joe Thomas for this MPEG-2 standard definition outing. There was some grain, some lighting effects run amuck, and some overly used crowd shots but otherwise the show was a solid capture of the band several years ago. The fleshtones were accurate, and the more intimate setting than the 2003 Live in Seattle concert benefitted some of the material more than others, making it second only to Dreamboat Annie: Live in terms of the crisp nature of the visuals. The video bitrate moved around substantially too but it hovered around the upper 7.1 Mbps when I paid any attention to it, making it a good candidate for a high definition version (with lossless audio if possible) should the company decide to really go the extra mile in the future. The use of medium shots allowed for more context than the usual concerts that show so many close ups too, some framing chopping off members of the band but giving the Wilson sisters lots of attention all the same.

Sound: The primary audio track was the 5.1 Dolby Digital Surround in English using the usual 48 kHz sampling rate and a decent 448 Kbps audio bitrate. The dynamic range was pretty solid here with pretty decent headspace provided thanks to the manner it was recorded. The mix was heavy on the vocals, particularly Ann, and the surround speakers could have been slightly more aggressive but it struck me that the idea here was to eliminate the crowd as much as possible outside of some polite clapping, weakening the concert experience in favor of a near studio effort (with the exception of the applauding at the end of most songs). I actually prefer my concerts to sound like this rather than as if I'm sitting on the middle of the front stage but concert "purists" all seem to have their own ideas in this regard so your mileage may vary.

Extras: The only extra provided here was a true double side to the cover and a short interview by the ladies covering a lot of familiar territory in under ten minutes. I would have liked more, maybe even a cleaned up audio-only version of the concert (or an audio only version of the original set), but the concert was the main draw here and lasted long enough to fill my expectations.

Final Thoughts: Heart Live was another fine concert of the band showing why so many people have learned to appreciate them over the years. The technical aspects were aptly handled and you really can't go wrong with any of their concert lists, this one serving a lot of the Jupiter's Darling songs for those of you that enjoy it. The extras were light but in terms of shooting concerts, director Joe Thomas is about as good as you will find so I was happy to see he did his usual straightforward work on Heart Live in this set captured back in the 11th season of the show so give it a look and you will likely find it a great companion piece to both Dreamboat Annie: Live and Heart Alive in Seattle.