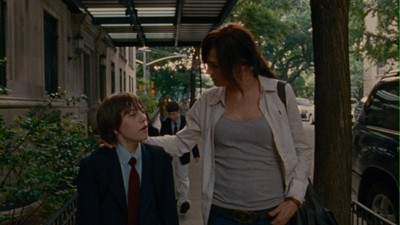 In Turn the River, statuesque actress Famke Janssen plays Kailey Sullivan, a gambler with a yen for card games and pool hustling. After a particularly rough string of games, she decides she needs to make some changes, but not in the usual gambler's anonymous, let's-get-clean-and-sober sense. Rather, actor-turned-writer/director Chris Eigeman (perhaps best known for starring in the Whit Stillman movies) is using the grimy underworld of pool halls and backwoods bars as window dressing for a character study about a mother trying to do what is best for her son.

In her youth, Kailey married a man who dropped out of seminary and abandoned the priesthood to be with her. When the guy's rich mother (Lois Smith) caught up with them, she yanked junior back by his ear and convinced Kailey to give up their unborn child in trade for not going to jail for a litany of trumped-up crimes. Being young and stupid, Kailey agreed, and now more than ten years later, she wants to put things right. She's been keeping tabs on her son, Gully (Jaymie Dornan), and the two have been exchanging letters and meeting in secret for quite a while. A smart kid who has skipped a couple of grades, Gully has to contend with bullies at school and an alcoholic father (Matt Ross) at home. Kailey is convinced she can do better by him.

Her plan? Go to Canada. In order to buy convincing passports to get her and Gully across the border, Kailey has to set up one big score. With the help of an old hustler named Quinn (Rip Torn), Kailey gets a potential big fish (John Juback) on the line. If she can reel him in and then land him for a large payout, everything will be set.

For his first time behind the camera, Eigeman does a fairly good job creating a self-contained world full of genuine atmosphere. He doesn't oversell the seediness of the situation or try to make his gamblers the typical caricatures you would find in more conventional crime films. There are no ethnic stereotypes or stock players in Turn the River, and it lends the movie an authenticity that is rare in other newbie efforts. It feels like Eigeman is trying to craft an underworld that is true to life, if maybe a little left of the common flow, rather than a familiar redo of pool halls he's seen in other movies. The downside of this is that a little more style might have helped him out when it came down to shooting the big game between Kailey and her whale. There isn't much suspense in the match, nor does Eigeman orient the viewer in the game. Most of the time, I didn't know if Kailey was up or down, nor could I figure out how many racks she had played. It's not that Eigeman is incapable of generating suspense, because when Kailey tries to make her run for the border with Gully, Turn the River becomes a real nail biter; it's just in the confines of the game that Eigeman doesn't seem to know which way to point his camera.

Famke Janssen is easily Eigeman's #1 asset in making Turn the River come off. First of all, despite being an extremely beautiful woman, she looks like she's actually been living her life, and thus she's far more believable as a hard-rolling woman like Kailey than most of her Botoxed peers could ever hope to be. Second, when you add to that her very natural way of being, her unmannered physical style and way of speaking, she turns what could have been an overripe performance into a heartfelt portrayal of a woman who knows her window for making things right is very small and is anxious not to miss it. She has a good rapport with newcomer Jaymie Dornan, and you can see her acting around him in such a way as to make him comfortable, fulfilling the mothering role as a performer giving a child the confidence to do what he's supposed to do while also acting as his mother on the screen. It's uncanny.

Turn the River is a good effort that mostly makes all the right shots. The ending of the movie may be a slight overcalculation, pushing a little too hard for a dramatic finish, but Eigeman at least errs on the side of going for the less obvious conclusion. He just may have gone a little too Bonnie & Clyde in his attempt to stay out of Lifetime Channel territory. In gambling terms, it's the equivalent of going all-in, and though the filmmaker doesn't have everything he needs to back up his risk, you've got to admire his moxy for trying. 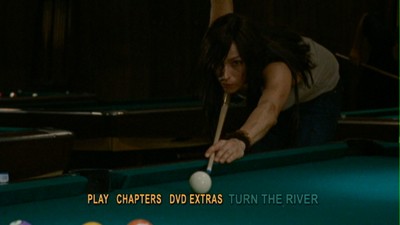 The DVD of Turn the River I received for review is a pre-release screener that does not reflect the final product. It has provisional menus and a portion of the special features, but at the same time it is intermittently watermarked and may not be indicative of the actual technical quality of the retail version.

Video:
The anamorphic widescreen transfer on this screener DVD is pretty good, though the resolution is a little soft and the overall look a tad grainy. I didn't see any pixilation or artifacting, and the colors have a natural hue. If this is the same quality as the retail version, it's about average, but I suspect it may be a grade or two off from what the studio will eventually street with.

Sound:
The packaging does not indicate what audio options there will be outside of there being a Dolby Digital logo and a listing for Spanish subtitles. The audio on the screener is a little flat, with a few scenes where it becomes hard to hear what is being said when the actors drop their voices lower in volume.

Extras:
The director's commentary with Chris Eigeman was not included on this screener.

The studio does include a behind-the-scenes featurette, lasting just over a minute, showing the raw footage Famke Janssen performing the trick shot from the climax of her pool game, which apparently she got in one take despite having a full half-day scheduled for it.

FINAL THOUGHTS:
Recommended. Turn the River is a commendable indie debut from actor Chris Eigeman, who steps behind the camera for the first time to deliver a small, suspenseful drama about a gambling mother plotting to steal her son back from his boozing father. Former Bond girl and X-Man Famke Janssen jumps into the lead role with her whole being, working nicely with Eigeman's understated style to create a realistic story that largely unfolds in out-of-the-way corners. The dynamic between mother and child is excellent, and though the ending does induce some head scratching, the movie makes many smart bets that truly pay off. 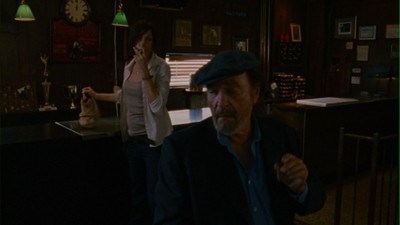