New Yorker Video // Unrated // September 2, 2008
List Price: $29.95 [Buy now and save at Amazon]
Review by Chris Neilson | posted September 2, 2008 | E-mail the Author
Sri Lankan filmmaker Viumukthi Jayasundara's The Forsaken Land (Sulanga Enu Pinisa) was honored with the Caméra d'Or for best first feature film at the Cannes Film Festival in 2005. The Forsaken Land's principal characters are Anura (Mahendra Perera), his wife Lata (Nilupili Jayawardena), and his spinster sister Soma (Kaushalya Fernando). The trio live together, largely in silence, in an isolated house on a windswept plain. A long conflict between the national government and local rebels has abated into a Kafkaesque ceasefire where violence has been tempered, but still occurs under cover of darkness, with little rhyme or reason.

Though the symptoms vary, everyone seems to be suffering from post traumatic stress. Depression, disquiet, desperation, and alienation are the prevailing moods. Anura is a provincial militiaman bullied by the regular army patrols, who appears to want little more than to do the minimum necessary to preserve his job and his life. His wife, Lata, is young, attractive, bored, and unfaithful. His sister, Soma, is the only one who hasn't psychologically walled herself away. She allows herself to hope for something better, but she also feels the pangs of disappointment much more sharply than the others.

Very little is said in The Forsaken Land -- the first line of dialogue occurs 13 minutes after the opening titles -- because the characters are so emotionally isolated and hopelessly numb that they rarely bother speaking.

Jayasundara cites Franz Kafka and Samuel Beckett as sources for the absurdist hell his characters are stuck in, but it's also reminiscent of Jean-Paul Sartre's play No Exit. Jayasundara also incorporates the long takes of Andrei Tarkovsky, and Michelangelo Antonioni's use of landscape to express interior isolation. 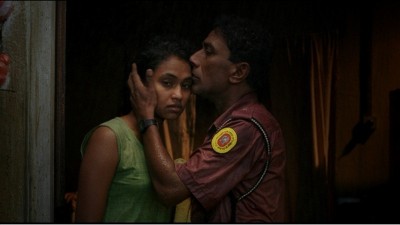 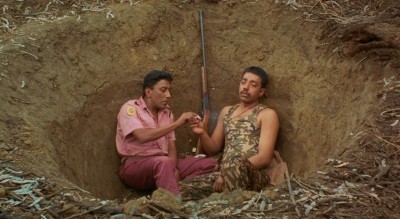 The DVD
Video:
The anamorphic 1.85:1 image looks better than average for a New Yorker Video release. The image appears slightly soft with noticeably aliasing, but the colors look true, and the image is progressive and damage free.

Extras:
The extras include the theatrical trailer, a PDF press packet, a tri-fold booklet, and a 29-minute documentary: The Land of Silence ( La terre abandonee), shot by Jayasundara in black and white on an antique camera (probably 8mm, though 16mm is possible). This short, in English with burnt-in French subtitles, records the physical toll of war on the maimed bodies of soldiers and civilians in a Sri Lankan hospital.

Final Thoughts:
Viumukthi Jayasundara's moody and impressionistic account of a countryside gripped by the terror of an uneasy ceasefire is clearly informed by the experience of his homeland, Sri Lanka, but it is not meant as a case-specific docudrama. Instead, The Forsaken Land is an allegory about the psychological damage that follows in the wake of war, and for which there is no relief so long as the imminent threat of war remains.

Viewers who relish sparse dialogue, slow pacing, minimalistic plot, and subtle, psychological drama will find much to like in The Forsaken Land.