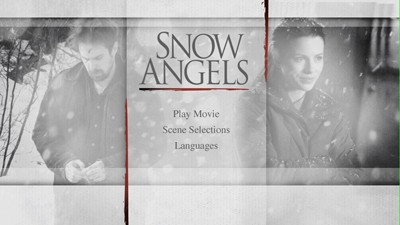 Of our modern directors, David Gordon Green is the one that is probably the most sensitive to the realities of the average American life. In movies like George Washington and All the Real Girls, he employed a naturalistic style to capture the concerns of regular people, examining the way they get through their everyday problems and the mistakes they often make that send situations careening out of their control.

For his fourth feature, Snow Angels, adapting a novel by Stewart O'Nan, Green has stayed in his tried and true arena, leveling his gaze on a town small enough that whether they know it or not, everyone's lives are intertwined, forming a social cat's cradle that, when pressure is applied to one string, it pulls on all the others in kind.

If there is a center to this tangle, it's Annie (Kate Beckinsale). To put it kindly, Annie is riding an unstoppable train straight through the middle of a car wreck of a life. Estranged from an alcoholic husband (Sam Rockwell), who failed at a spectacular attempt at suicide after they split, Annie struggles to raise their daughter Tara (Gracie Hudson) on her own. She works as a waitress in a Chinese restaurant with her best friend Barbara (Amy Sedaris), whose husband Annie just so happens to be having an affair with. Just to show you how tightly knit this community is, the restaurant's dish washer is Arthur (Michael Angarano), who Annie babysat when he was growing up. He had a crush on her then, and he has one now, one that is only exacerbated by her keenly flirtatious manner. (Plus, you know, she's Kate Beckinsale. I don't think it's possible to be a straight teenaged boy and not have a crush on Kate Beckinsale. That would be like hating free money.)

You think you know where this is going, but you very much don't. If this were a big budget Hollywood release, you would, but Green follows the muse of life, and thus avoids the clichés we have come to expect from the moviegoing experience. This means no May-December romance, no chance for the gawky teen to play the white knight. Rather, his story unravels in completely different ways, as he comes to grips with his longing with the help of a sweet high school romance with new girl in town Lila (Olivia Thirlby). Both Angarano and Thirlby (who was also really good in Juno) are fantastic in their roles. He is all fumbles and mumbles, and she is quirky and sweet without being precocious. Beyond her acting ability, it's actually a smart bit of casting since Olivia Thirlby and Kate Beckinsale look like they could be sisters. Arthur clearly has a type.

On the other side of things, the fork in the movie road comes in the form of a great tragedy. Tara disappears, and the cat's cradle slips from its supporting fingers. Snow Angels is a movie about heartbreak and loss, and the completely stupid ways we have of dealing with them. Everyone looks for someone to blame. Annie wants to be selfish and cocoon herself, while the father, Evan, keeps trying to force her to get closer. He has replaced his drinking with religion, and neither crutch helps him deal with his problems. It would have been easy for Sam Rockwell to get overly showy with the role, and there are times when you expect he might lose it, but he finds the truth within the twitchy, wannabe martyr. An expert at playing flashier crazies, the actor achieves a real quiet here. 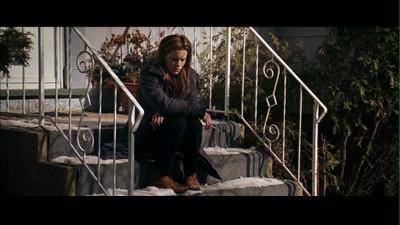 Kate Beckinsale is excellent, as well. Her choices show tremendous sympathy toward the mother, who legitimately wants to climb out of the quicksand her existence has sunk into but only finds more frustration the harder she fights. Really, the whole cast is wonderful, and Green handles them with the gentlest of touches. His camera is never imposing, nor is the editing manipulative. He understands the natural points where moments begin and end, finding the pathos within the harsh reality. The only off-note is Nicky Katt as the philandering other man. He's a good actor, but he continually brings the same over-developed mannerisms he used on the TV show Boston Public to every one of his film roles. I suspect he can do better, but if not even David Gordon Green can get it out of him, I'm not sure anyone ever will.

There are soft options that Green could have taken to close Snow Angels, but he doesn't. The resolution of the film is devastatingly sad, but there is also a little hope. The young love of Arthur and Lila could be indicative of a future without the tragedy of the present, perhaps they can learn from the mistakes of the adults around them. On the other hand, Annie and Evan were once young, too. In the prom photo next to Evan's bed, they are just as happy and youthful as their teenaged counterparts. All it takes is the first wrong choice before plenty more wrong choices begin to add up, and suddenly that car-wreck life is a multi-car pile-up.

Video:
David Gordon Green and director of photography Tim Orr shot Snow Angels at a very wide 2.35:1 aspect ratio. Warner Bros. has released the movie as a flipper disc with an anamorphic widescreen transfer preserving that aspect ratio on one side and a full screen version on the other. The image quality is excellent, with rich colors and deep tonal values in both the bright and the dark scenes. There is no banding or other digital errors.

For those who still aren't convinced that widescreen is the way to go for watching movies at home (is there really anybody who still thinks that?), here are two images from the same moment in the film, one from each transfer. The power and superiority of Green's wider composition should be obvious. With the added elements, particularly with the detail to the right of the screen, Beckinsale and Rockwell's characters appear on a more desolate landscape, more isolated, more alone in a world larger than they are. 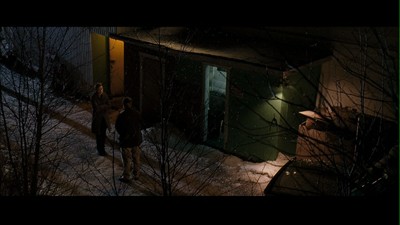 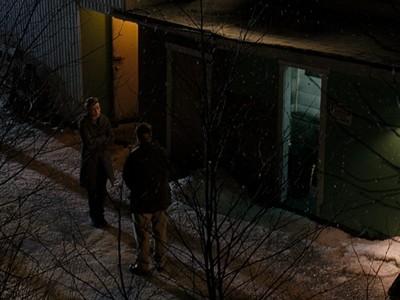 Sound:
The DVD has two 5.1 audio tracks, one in the original English and a French dub recorded in Canada. The mix is top-notch, with a nice range in the dialogue, capturing the more subtle nuances of human conversation as well as the full soundscape of music and effects.

Subtitle options are Spanish, French, and English for the deaf and hearing impaired.

Extras:
Zero to be had. While a movie this good requires no added explanation, and while I'd rather have nothing at all than the cursory promo material that often passes as a "bonus," it would have been nice to hear a little from David Gordon Green and maybe some information on the original Stewart O'Nan novel. The studio has treated this movie with high regard in its technical aspects, so it's surprising to see them treating it like a cursory release otherwise.

FINAL THOUGHTS:
Highly Recommended. Snow Angels is one of my favorite movies of 2008, perhaps my favorite overall drama of the year. David Gordon Green's fourth feature packs an emotional wallop that is compelling for its raw honesty and commendable for how it encompasses the full gamut of life. Though heavy in its content, it isn't bogged down with just dealing with the dark side of the human experience, but the upward swell, as well. It shows us both the hope of new promises and the despair of promises unfulfilled by creating parallel stories between current high school sweethearts and the failure of relationships of high school sweethearts of generations past. Expertly acted, written, and directed, Snow Angels is not to be missed. 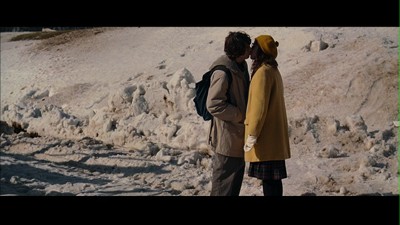