Mindscape of Alan Moore, The 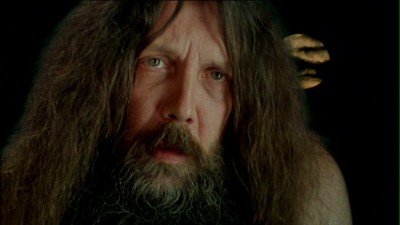 Alan Moore is easily one of the most influential comic book writers of the late 20th century. His career-defining scripts for his Watchmen series set a standard for serious minded, "real world" takes on the superhero genre, while V for Vendetta and his run on DC's Swamp Thing changed how the art form dealt with sci-fi and horror, as well. As Moore's career progressed into the 1990s and the new century, he became more of a maverick, producing both extremely mainstream work-for-hire scripts and also going back to the superhero genre he deconstructed and putting it back together via multiple creations under his own comics banner, tying them to the greater mythology of adventure fiction from the past. With Zack Snyder bringing Watchmen to the silver screen early next year, more people are likely to learn about Moore's work, all of this despite the writer denouncing the adaptation sight unseen based on previous misguided adaptations of his books From Hell and League of Extraordinary Gentlemen.

So, what better time than now to give a wider release to one of the rare instances of a cinematic feature that the author has blessed with his involvement, DeZ Vylenz 2003 documentary The Mindscape of Alan Moore. While the DVD has had some limited distribution in the past, this Disinformation 2-DVD set will be the first time it has been made readily available through most major retail outlets.

The approach to Moore and his work is pretty simple. Vylenz sits the writer down and lets him talk, using the man's own words to shape the course of the documentary. No outside commentators are featured, it's all Moore all the way through. He discusses a variety of topics, including much of his work; mainly, the aforementioned Swamp Thing, V for Vendetta, From Hell, and Watchmen, as well as more left-of-center and obscure creations like the pornographic Lost Girls and the journalistic Brought to Light. As far as Moore's actual comics output goes, fans will likely have strong reactions to the absence of Moore's own America's Best Comics line, which has constituted the most substantial chunk of his bibliography for the last decade. These were most likely left out because they didn't, for whatever reason, fit into the great thrust of the documentary's narrative. The Mindscape of Alan Moore is less about his work and more about the man's greater ideas and his theories on the progression of human existence, using the books that are covered as a groundwork to go off on topics ranging from the link between magic and storytelling, the evolution of human thought, the relationships between sex and violence and between religion, science, and spirituality, and where Moore sees the human mind as going next. 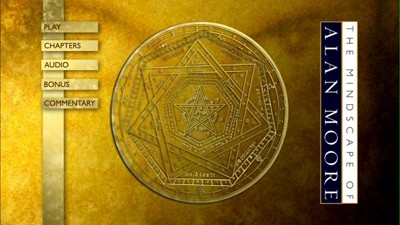 Honestly, a lot of Moore's theories start off sounding like mumbo jumbo, particularly as he looks a little bit like a crackpot with his out of control hair and beard and with the affectation of his many finger-length rings, but he has a way of explaining himself where he can take an outrageous concept and take you through the many layers of the idea and provide a context that shows how it is applicable to everyday life, somehow tying it all together in a convincing manner. My interest in Moore's writing is cursory, at best, as I've never found a lot of it to be as compelling as most of my comic book peers, so for me, I found that Mindscape got infinitely more interesting as soon as the comics were left behind and the monologue got more esoteric. I think this bodes well, then, for the movie being interesting to viewers who aren't overly familiar with Moore's comics. Though he regularly ties his ideas back into the medium he uses to express them, Mindscape is really about showing the vast pool of thoughts that Moore has cultivated rather than getting into the nitty gritty of comic book production.

Stylistically, DeZ Vylenz tries to keep up with Moore as best he can, and he does a fairly good job of keeping Mindscape from just being a static film of one guy talking. When Moore discusses the specific locations of his childhood, we see footage of the town where he grew up, and his discussions of the comics of course feature images from the books. So, too, do we see tarot cards when Moore delves into magic, as well as psychedelic backdrops when the writer takes us deeper into his mind-bending ideas about consciousness. Less effective are the dramatizations of some of his stories and concepts featuring actors in costumes and special effects straight out of '50s sci-fi flicks. The electronic music, provided by a variety of composers such as Drew Richards and Bill Laswell, is also overbearing and cheesy at times.

Imperfect as it may be, The Mindscape of Alan Moore is still an intriguing confection. It's not often that a movie comes along that is devoted solely to ideas, and hearing Alan Moore talk about the "Ideaspace," this disc could be said to be, in its own way, a concrete expression of Moore's theory of a connected mental universe. Whether you're a fan of his work or not, what he has to say should intrigue any intelligent individual who is curious about alternate ways of looking at the world. 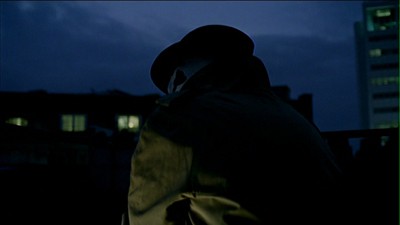 Video:
The main feature is shown in a 1.78:1 widescreen aspect ratio and is a fairly decent transfer. I noticed a little digital artifacting in some of the backgrounds, and there were also spots and scratches on the picture from time to time. At first I mainly noticed these in the footage of Moore's hometown and thought maybe Vylenz was using stock footage that was showing its age, but I also saw the same kinds of image errors here and there in the new interview material.

Sound:
There are two audio choices for the soundtrack, a digital 5.1 and a 2.0 mix. The sound quality of the DVD is quite excellent, with a good balance struck between Moore's monologue and the music.

Subtitles are available in English, French, Spanish, and Portuguese.

Extras:
The Mindscape of Alan Moore is a two-disc set housed in a standard plastic case with a staggered double tray on the inside. The case also has an outer slipcover with the same design as the interior cover. A glossy 20-page booklet features the film's credits and introductory text pieces by Vylenz and fantasy-author Michael Moorcock

In addition to the main feature, DVD 1 has a variety of supplements. A 12-minute "Making of" puts together a montage of the crew at work, largely soundtracked by music, with footage of them setting up the shots for the non-interview material and the set-up with Moore, as well. To go with this are several interviews with crew members. Director DeZ Vylenz talks about his background, his journey discovering comics and the appeal of Alan Moore, and the challenges of the production (15 minutes, 45 seconds). Vylenz speaks over two sessions, as does effects designer Brian Kinney (11:25). Kinney shows us the creature he created that was meant to represent primordial evolution, as well as character masks and how he achieved there effects where it appears we are peeking in on the microscopic world. He also explains how and why he got into the effects industry. Finally, music composer and sound designer Drew Richardson discusses his background and inspiration, and how he approached working on this documentary (18:40).

Vylenz provides a scene-specific commentary for seven selections from Mindscape. The chosen scenes focus on the dramatic recreations made for the film and on Vylenz's interpretation of what Moore says in the movie and how it shaped the way he put the documentary together. These scenes, unfortunately, must be chosen one by one rather than there being an option of playing them in one go. There is also a slight glitch where, if you try to return to the commentary menu during one of the scenes, the disc goes back to the chapter menu instead. This can be really annoying, since Vylenz's commentary often ends before the chapter actually ends, and once he is done talking, the soundtrack goes silent and the image, for some reason, begins to stutter, pausing every couple of seconds before moving forward, basically forcing you to use the menu button to get out of it.

There are two trailers included, showcasing two different musical selections from the film. 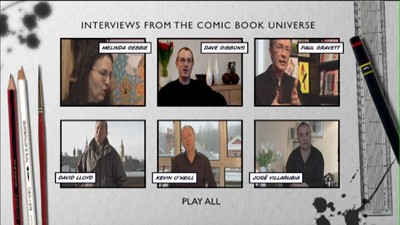 DVD 2 features interviews with several comic book professionals, including an excellent introduction to Moore's history and a précis on comics in general by respected historian Paul Gravett. The other five interviewees are artists Moore has worked with, including his wife Melinda Gebbie (Lost Girls), Dave Gibbons (Watchmen), David Lloyd (V for Vendetta), Kevin O'Neill (League of Extraordinary Gentlemen), and Jose Villarubia (Promethea). The interviews range from 13 minutes (Lloyd) to about half an hour (Gebbie, Gibbons, Gravett), and in addition to discussing the expected connections with Moore, the artists also talk about their personal inspirations and ways of working. Comics fans in particular will enjoy this supplemental disc.

FINAL THOUGHTS:
Whether you're a comics fan or just a fan of progressive, esoteric thinkers, The Mindscape of Alan Moore is Recommended. Director DeZ Vylenz worked closely with the visionary writer to explore the vast ideas he has employed in comic books like Watchmen and V For Vendetta and go beyond them into Moore's larger theories about the ever-changing nature of human thought. Though the filmic techniques can be clunky, Moore is a captivating speaker, and a second disc of interviews with his collaborators really brings the state of the modern comic book into focus. 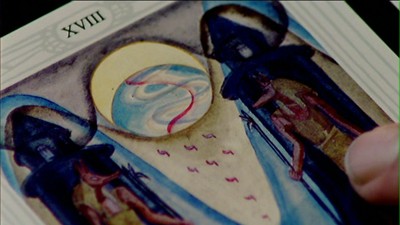