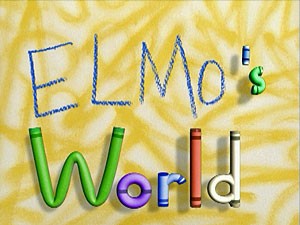 
The Show
I set my bar pretty high when it comes to approving what my baby daughter is allowed to watch on TV, as I tend to watch with her, and I just can't put up with sappy, saccharine crap that's simple boring. That's why she clings to a Brobee doll from "Yo! Gabba Gabba" rather than a stuffed Barney or Boobah. I don't mind her watching the tube, since when I was an infant, I watched TV way more than experts recommend, soaking in Johnny Carson and "Jeopardy!" For now though, we have just one shared video vice, and that's the kids classic "Sesame Street."

Of course, it's not the same show I grew up on, especially with that updated theme song. One of the biggest changes has to be the emergence of the Red Prince, the furry little Pied Piper they call Elmo. A deal-breaker for many whose image of the Street predates his giggly presence, Elmo is obscenely cute. The high-pitched voice, the bright red fur, the childish demeanor, the laugh...oh the laugh. It all adds up to a character who, to children and adults, is hard to resist, no matter how hard he's merchandised., so it makes sense he'd get his own shot at stardom. Barely contained within the walls of Sesame Street, the show-within-a-show "Elmo's World" is all Elmo, all the time (in small chunks at least.) 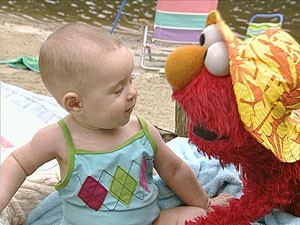 The show, which takes place in a CGI crayon-colored room, lets Elmo interact with his friends and possessions, as he learns about topics like the beach, skin, and cameras. The segments follow a pretty strict formula, with Elmo talking to his fish Dorothy, his drawer, his TV and his computer, who show him a variety of animated pieces and video related to the theme, like Oscar the Grouch talking about keeping safe in the sun, or a little girl taking pictures of her family. You know pretty much what you're going to get each time, with just the selection of features differing (sometime you'll get Elmo asking a question to a baby (which is pretty cute), and sometimes he'll check his e-mail.)

What he'll always do though is check in with Mr. Noodle, a mute fellow who seems to live outside his house (Elmo can see him through a window, which is a bit weird if you think about it.) Looking like Rip Taylor's lost cousin, he clowns around and pantomimes various misunderstandings about the topic at hand, gently frustrating and amusing Elmo, who watches and corrects silly Mr. Noodle. Depending on your tolerance for kinda creepy barbershop-quartet rejects, he'll either be the worst or most morbidly curious portion of the show. But to your kids, it's just more Elmo goodness, so why worry? 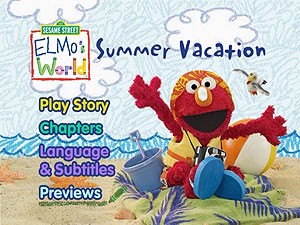 The DVD
A one-disc release packed in an Elmo-appropriate red keepcase, with a 12-page booklet of parenting info, the DVD features a mildly-animated full-frame menu with options to play the show, select from the three chapters, adjust languages and watch previews. Unlike what the box says, audio options include English and Spanish Dolby Digital 2.0 tracks, with subtitles available in English and Spanish. There is no closed captioning.

The Quality
The full-frame transfer looks great for the most part, with vivid color and sharp detail during scenes in Elmo's house, while the live-action footage tends to have a bit of a light film over it, making it slightly softer and duller. For some reason though, the footage of Mr. Noodle is rather pixelated. There are no issues with dirt, damage or digital artifacts.

The Dolby Digital 2.0 track is just what you'd expect from a kids' show, with dialogue and music that's right down the middle. Everything is pretty well separated and free of distortion, so there are no issues here.

The Extras
The only extras included are some DVD previews. 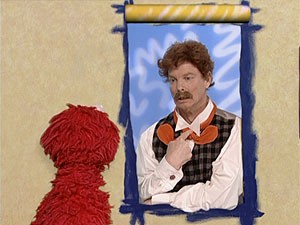 The Bottom Line
There's no denying the cuteness of Elmo, and Elmo's World is a solid showcase for his happy, sunshiney lessons about less academic subjects than the traditional Sesame Street areas of the alphabet or numbers. The DVD looks and sounds just fine for this material, but there's no extras and the actual show runs just 51 minutes, which is rather short in comparison to other kids DVDs. Whether you need to add this to your collection depends on how hooked your little one is on Elmo.