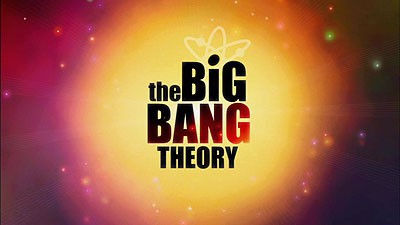 
The Show
I am a big fan of the sitcom, but it's been a long time since I've found a traditional three-camera show that really spoke to me. Thinking back, I can't even remember the last one I watched regularly, with nothing stacking up to my memories of the classics of the '80s (outside of the rare series like "Roseanne" or the short-lived "Grand.") Even NBC's legendary Thursday Night line-up did nothing for me until "The Office" was imported.

So I was shocked when I watched the first episode of "The Big Bang Theory" and found myself hooked and laughing out loud. How was it that this series from a man responsible for "Dharma and Greg" and "Two and a Half Men" (series with popularity I find utterly inexplicable) grabbed me by my labels, tickled me mercilessly and refused to stop? Well, besides the presence of James Burrows as the director of the pilot, part of the appeal is Johnny Galecki, a shamefully underrated comic actor who earns basically anything he does at least a look from me. Here, as the nerdy, yet mostly normal Leonard, he pulls on a pair of unfashionable glasses and, like Superman, he becomes an awkward guy who doesn't seem comfortable anywhere other than his physics lab or playing "Halo" with his fellow geeks, among whom he is the leader. 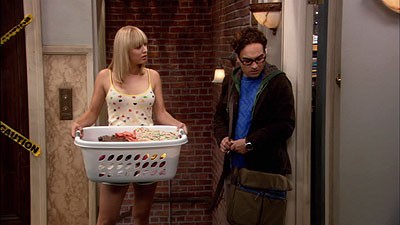 As good as Galecki is here, Leonard's roommate Sheldon (Jim Parsons) is the show's breakout star, running wild over every episode like a scene-stealing machine likely powered by Asperger's. Parsons is excellent in crafting the very memorable Sheldon, who is as close to an alien as you could probably get in a human, lacking a sense of understanding of basic human interaction and emotion, the result of a young lifetime of academic pursuit that left him a child prodigy who doesn't get sarcasm. Loaded with ego and intelligence, and none of the good sense to keep either in check, his behavior aggravates all those around him, including Leonard, and he will say anything, making for some moments of great humor. To Sheldon, there is no inner voice, for which we can all be thankful, as it allows him to point out the benefits of bulk tampon purchases and cut down Leonard when he's on his flights of fancy.

The third member of the show's lead trio is Penny (Kaley Cuoco), the ditzy blonde from Nebraska who moved in across the hall, who can't understand all their talk of equations and theories. As perfect an opposite as you could get from Leonard and Sheldon, this simple Cheesecake Factory waitress provides a very real counter to their physics-focused lives, and offers Leonard an object of lust who's so close, yet so far away. It's his crush and her midwest friendly nature, portrayed well by Cuoco with a sweetness that is hard to pull off, that sets up a season's worth of nervous-geek gags and will they, won't they romantic tension that's surprisingly real for a couple on such extreme ends of the high school-clique scale.

Sheldon, Leonard and Penny are joined by a tremendous supporting cast that's led by the geeks' best friends, Howard and Rajnesh. Opening the window for ethnic comedy by bringing in the Jewish Howard (Simon Helberg) and Indian Rajnesh (Kunal Nayyar) expands the joke palette, but they are more than stereotypes, as Harold's undeserved super-confidence and Rajnesh's severe social anxieties make them fun additions to the group, especially when interacting with the beautiful Penny and her friends. Nayyar gets off some great one-liners, but his character's shyness keeps him out of the spotlight for the most part (though episodes were he overcomes his problem through liquor and drugs are particularly fun.) Helberg on the other hand frequently challenges Parsons for the scene-stealing title, showing the fantastic timing and delivery that made him stand out on "Studio 60."

Refreshingly focused on the relationships and misadventures of the main cast, the show doesn't go over the top with guests, though DJ Qualls is great as a frustrated lab assistant/actor. The supporting cast is the scene of a "Roseanne" reunion of sorts, as Lorre and Galecki are joined by fellow alumni Laurie Metcalf, who plays Sheldon's mom as a fundamentalist Southerner, and Sara Gilbert, who provided one of the most uncomfortable sexual line readings ever seen on TV as the guys' fellow scientist Leslie Winkle. If there was ever a worry that Leonard would find a sense of self-esteem, as long as Leslie and her low-key speech pattern were near, he wouldn't get too full of himself.

The first season of the show is loaded with great episodes, which are fun to watch even in repeat viewings, mainly because the cast is so perfect in their roles. Though Penny might be a bit too "blonde" at times, giving occasional jokes about her intelligence a cheap feel, the majority of the show works excellently, like an episode that sees her bond with Sheldon's twin sister, the subject of aggressive flirting from the other geeks, or Sheldon's post-firing breakdown, complete with a loom and glowing fish. Any time Penny is stuck alone with Sheldon, it's a guarantee that there will be generous laughs, as her patience and his clueless personality clash like oil and water.

The ongoing story of Leonard's pursuit of Penny powers the majority of the episodes, as he either tries to change to please her or attempts to impress her, while she dates a string of hunky, yet uncaring guys. This dynamic would be impossible to maintain as the basis for a series, and by the end of the season, it's obvious the characters are going to find a resolution, one way or another. However it works out, the show should be fine, as it doesn't depend on the Leonard and Penny storyline, which is part of why it's such a terrific series (along with the kick-ass Barenaked Ladies theme song.) 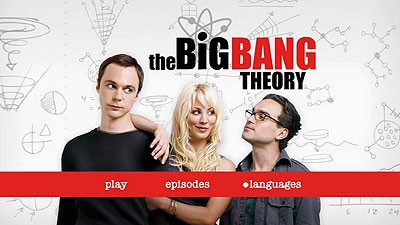 The DVDs
The 17 episodes of the first season of "The Big Bang Theory" are spread over three DVDs, , which are packed in a clear single-width keepcase, with a two-disc tray and an episode-description insert. The case is inside an embossed slipcover that repeats the inside cover art. The discs have static anamorphic widescreen menus, with options to watch all the episodes, select individual shows, adjust languages and view special features, where applicable. There are no audio options, though subtitles are available in English SDH, French, Spanish, Chinese, Korean and Thai. There is no closed captioning.

The Quality
For the most part, the anamorphic widescreen transfers on this set are excellent, with nice, bright color and a solid level of detail. There were no obvious issues with digital artifacts, nor were there any visible dirt or damage, though the first episode had some odd moments of excessive grain (the back of Penny's ex's shirt looking particularly messy.)

A dialogue-driven comedy doesn't get a lot out of a Dolby Digital 5.1 track, but the mix, which puts the speaking voices in the center channel, using the sides and rear to bump up the music and position the studio audience, is appropriate for the series and sounds fine.

The Extras
The only extra is a 17-minute featurette on the show, titled "Quantum Mechanics of the Big Bang Theory," which has interviews with the cast and creators. It's a bit promotional in its feel, but it's nice to hear from the cast and get their thoughts on the show, and get some details about the show, like the origin of the joke on Sheldon's whiteboard. A few audio commentaries would have also been nice, but we didn't get them. 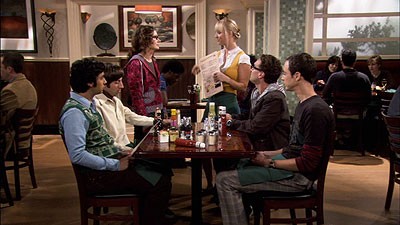 The Bottom Line
If you're looking for a chance to really enjoy a sitcom, this is the show to watch, as it's as mainstream as it gets, yet is refreshing and funny, to the point where you wonder what it's doing right that the other show's don't get. The DVDs look and sound very nice, though a few more extras would have been appreciated. Fans of the show may not have the additional reasons to own the series set, but it's a must for anyone who hasn't discovered Leonard and Sheldon yet.