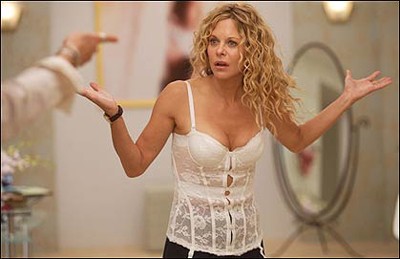 Here's a tip for you social types out there: if you're at a party and writer/director Diane English shows up, take that as your cue to exit. Because if her new remake of the 1939 George Cukor classic The Women is anything to go by, English can suck the fun out of anything.

The attention a film is paid for being a remake of a popular movie can cut in many directions. In one way, it's a lot to live up to, and in another, when you fail to meet the bar set by your ancestor, its existence is about all that is likely getting you any notice. Screwing up The Women would probably take more effort than getting it right, as it means throwing out the original play by Clare Booth and the Cukor-helmed screenplay adapted by Jane Murfin and the great Anita Loos. (If you haven't read Loos' original novel Gentleman Prefer Blondes, it's a scream!) The '30s version had witty one-liners, a smattering of slapstick, and enough plot drama to fuel a television soap for several years. The fact that those first two elements are missing from English's updating and that the third has been trimmed way back means English, best known as the creator of "Murphy Brown," apparently thought she had a better way of doing things.

Oh, no, she most certainly did not.

Meg Ryan steps into the Norma Shearer role as Mary Haines, the too-perfect housewife who discovers through the nail salon grapevine that her too-perfect husband has been cheating on her with Crystal Allen, a girl who works the perfume counter (Eva Mendes, standing in for Joan Crawford). It's Mary's best friend Sylvie Fowler (Annette Bening, who would kill as Rosalind Russell if given the material) who first hears about the affair, and despite her best efforts to keep Mary from finding out, Mary accidentally goes to the same manicurist (Debi Mazar) and hears the same story Sylvie did, sending her on her wretched way.

That's right, Sylvie tried to keep the scandal from Mary's doorstep. Fans of the Cukor film should go ahead and start gasping, because declawing Sylvie is one of the many changes Diane English has made to the source material in order to make The Women into a touchy-feely 21st-century tale of female empowerment. Sylvie is no longer Mary's loose-tongued rival, but they are now best friends, and the formerly feral feline is now a well-meaning, lonely career woman who has eschewed love in order to chase a pipe dream of turning a leading fashion magazine into a periodical full of depth and class. Ironically, that's the exact opposite of what Diane English has done to The Women. Go figure.

There is a special brand of hubris that goes into any remake. A filmmaker looks at a work that has not only inspired her, but is beloved by millions, and decides, "I can do it better." Peter Jackson did it with King Kong, taking the perfect little movie that made him want to be a storyteller and transforming it into a bloated, overwrought mess, all because he thought he could improve on someone else's success. Diane English tackling The Women isn't quite a blunder of equal proportion, but it's close.

Truth be told, this movie would have been better billed as the sequel to this summer's big-screen Sex & the City feature rather than an update of The Women. Ryan and Bening's characters are the only ones that are remotely recognizable from the core group in the original script, and instead of keeping the large but carefully chosen cast list from previous incarnations, English has pared down the central ladies to a mere quartet. Meg Ryan, whose surgically enhanced features now make her more of a special effect than an actress (oh, the hard-hitting irony of the plastic surgery jokes in this film!), would be Carrie Bradshaw; Annette Bening is Samantha without the sex, Jada Pinkett Smith is Miranda without the whining, and Debra Messing is goody-goody Charlotte. The Smith and Messing roles are nearly total inventions, cooked up by English to fit the formula. Their analogues in the source material are barely even there. 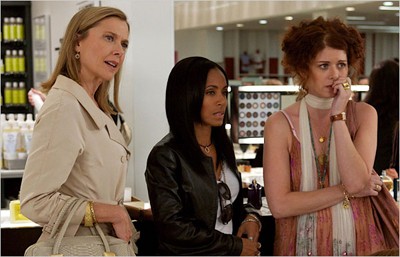 Which, you know, fine, if The Women ca. 2008 was a good movie all on its own, I wouldn't care a whit how it fared next to The Women ca. 1939. The problem is, this remake is simply not a good movie. It nervously makes jokes about how cliché old movies are, hoping we won't notice and maybe be fooled into thinking it's a progressive retooling of a stale antiquity, but you'd be hard-pressed to find a more cliché movie than this one. In place of the fun double-crosses that have made the Cukor movie an enduring pleasure, we get a lot of hugging, a lot of talking, and a lot finding oneself. No one betrays anyone on purpose, or at least without a good, albeit misguided, reason that will allow the girls to forgive one another. Mary doesn't put wheels into motion to knock out the competition, she improves herself instead. Not even the delicious villainess, Crystal Allen, is ever really bad. Eva Mendes is used more as window dressing than an actress, an objectified plot-point rather than a believable, fully realized schemer that we love to hate. Joan Crawford would have never stood for such treatment!

The only thing that English gets close to maintaining from the 1939 film is the conceit that there would be no men on the screen at all, and from beginning to last, she almost manages to make it. Her sneaky insertion of the sole male actor in the movie is also the worst of the predictable plot twists she has come up with. Would you believe this movie ends not with Mary and her husband reconciling, but with all four women rushing into a hospital so that Debra Messing can deliver a baby? Enough already, we get it! Giving birth hurts like hell, and the mother gets mean and says horrible things. Bill Cosby called from 1983, Diane, and he wants back that VHS copy of Himself he loaned you.

I don't care who you are, man or woman, classic movie fan or uneducated newbie, the bottom line on The Women is that it's an unfunny, flaccid disappointment. If you ignore my warnings and see it anyway, don't let it fake you out at the beginning. For a while there, it looks like it's going to be an okay time, but it's one of those flicks that just gets worse as it goes. When those final scenes come around, you will never be more jealous to see characters end up in a hospital, because you will be in a kind of pain only the most advanced medication can dull.