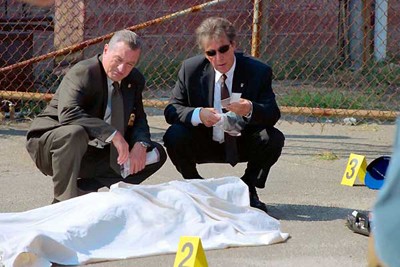 Righteous Kill comes to us trumpeting the fact that this is the first time Al Pacino and Robert De Niro have shared the screen together since 1995's Heat, and unlike that film, where they played adversaries and only had one scene together, Righteous Kill pairs them up for the bulk of the picture. De Niro is Turk and Pacino is Rooster, two long-in-the-tooth police officers who favor glory over retirement, and so they jockey for a high-profile case involving a serial killer who is dispensing a little vigilante justice on their city. He shoots bad guys at close range, leaving behind clumsy poems declaring his reasons for choosing each particular victim. Given the up-close-and-personal nature of the killings and the lack of any signs of a struggle, Rooster posits that the shooter has to have some way of gaining access to his targets. The most logical answer: a police badge.

If there is any joy to be had in watching Righteous Kill, it is from watching Pacino and De Niro working together. Neither of their roles requires them to be overly showy, and so instead of competing to see who is the more grandiose thespian, they confidently stroll through the film with the easy intimacy of two people who appear to have known each other a very long time and no longer have anything to prove to one another. Pacino peddles his usual brand of slickness, while De Niro is the more befuddled cop with anger management issues. Their characters end up teamed with two other detectives from a neighboring precinct (Donnie Wahlberg and John Leguizamo), and this extra pairing rounds out the acting quartet nicely, with Wahlberg providing a "good cop" analogue to Pacino's more together Rooster and Leguizamo's Perez being the young hothead version of De Niro's "bad cop" Turk. Perez and Turk also both have a history with Karen (the fantastic Carla Gugino), a forensic scientist with a taste for the rough stuff, and thus it's all the more questionable when Perez marks Turk as their #1 suspect.

Righteous Kill has all the makings of a good police thriller. Screenwriter Russell Gerwitz, whose material fared much better under Spike Lee when the director helmed his Inside Man script, has concocted an intriguing set-up with complex characters and interesting moral questions. Unfortunately, at some point, either Gerwitz or director Jon Avnet, a man whose back catalogue contains such diverse items as the universally panned Pacino-vehicle 88 Minutes and the chick flick Fried Green Tomatoes, made a fatal error along the way when they decided to open Righteous Kill with a videotaped confession from Turk. This confession runs throughout the movie, and it not only removes any suspense from the mystery, but it tips the movie's hand in such a way that any viewer with half a brain can guess where the plot is heading. Just stop for a moment and ask why all of this information is being laid out for you, and the bait-and-switch becomes obvious.

It's a cheap trick, and it only serves to keep the audience from becoming invested in the movie, because it actively discourages the viewer from getting as wrapped up in what is going on as they should be. (Confusion, friends, is key for audience participation in a good thriller.) The even bigger trick of Righteous Kill, though, has to be that Avnet has somehow convinced this remarkable cast that he is a capable director. There are some very good individual scenes within the movie, but the disjointed editing, overwrought use of slow motion, and CSI-level camerawork come off as desperate attempts to dress up a pig to try to sneak it into the Oscars. It's hard to tell if one should laugh at how obvious the disguise is, or be mad that the perpetrators think we will fall for it.

There is actually a good movie somewhere in Righteous Kill. Schedule some reshoots and a new pass through the editing bay, and this movie could be salvaged. Unfortunately, as I write this, the film is set to be released in less than twenty-four hours, so I don't see that happening. The movie is a massive squandering of riches, taking a solid premise and a marvelous ensemble of actors and doing nothing with them. As Turk and Rooster might say, someone has put two right between the eyes of this movie. The stench of the corpse isn't so bad that you should avoid it entirely, but you still might want to approach Righteous Kill with your nostrils pinched closed all the same.