Outlaw and His Wife, The

Kino has always been the champion of foreign films and early cinema, and now they've released a pair of discs featuring silent films by the influential Swedish director Victor Sjöström. This first disc includes his 1918 film The Outlaw and His Wife, a psychological drama that was way ahead of its time as well as a 1981 documentary on the director, simply entitled Victor Sjöström.

Victor Sjöström is best known as an actor, most famously for his appearances in Bregman films such as Wild Strawberries. Though he started out as an actor, he was also a director in the early days of film. His silent movies started the golden age of Swedish film, and were quite sophisticated for their time. Sjöström was one of the first to introduce realism into film. His movies often involved psychologically complex characters and featured natural settings which played an important role in the films. His work set the stage for the German bergefilm (mountain film) genre as well as influenced such directors as Ingmar Bergman and Carl Theodor Dreyer. 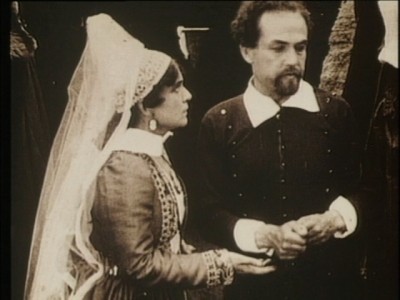 This film is a good example of his work. An itinerant laborer, Kari (Victor Sjöström) gets a job with the rich widow Halla (Edith Erastoff, who would eventually marry Sjöström), on her farm. Her brother-in-law, the local bailiff, has been pressuring her to marry him so that he could get her land. She has no love for the man however, and when Kari enters her life she falls in love with him. The bailiff discovers that Kari is actually an escaped prisoner, sentenced to 10 years in jail for stealing a sheep, and Orders Halla to get rid of him. Instead of sending him away however, Kari and Halla run away to the mountains.

There they have a simple life. They live in a cave and hunt and fish for food. They swim in the nearby lake and wash their clothes in a hot spring. After five years they have a daughter, and one of Halla's old workmen, Arnes (John Ekman) discovers them. He's an outlaw now too, hiding beyond the reach of the law. He moves in with the family and the group is quite happy for a while until jealousy rears its ugly head. Arnes falls in love with Halla and doesn't see why Kari should have her all to himself. On the mountain so many things could happen to a man, it would be easy for an accident to claim the unsuspecting Kari. 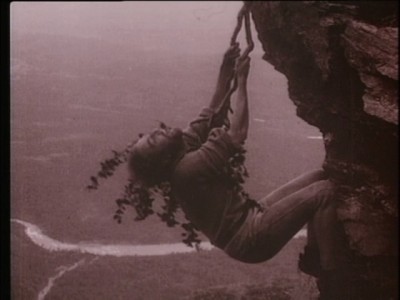 This film deftly combines realistic characters with some beautiful scenery to make a classic movie. The strongpoint of this film is the comments Sjöström is able to make about society and possessions. Halla is very rich, owning a lot of land and having a dozen men in her employ to work it, but she's not happy. She has to fend off the advances of her oafish brother-in-law and is also very lonely. When she gives up all her worldly good to live like a hermit is the time that she's happy. The same goes for Kari, who is never content until he's up on the mountain, living off the land with the woman and daughter that he loves.

He also makes some interesting comments about marital relations. No one who is single is contented and fulfilled. The bailiff covets Halla's land, and Arnes wants her body. It's only Kari and Halla, 'married' and devoted to each other who are really contented. Even when they're trapped in a blizzard at the end and fighting with each other, their love pulls them together. 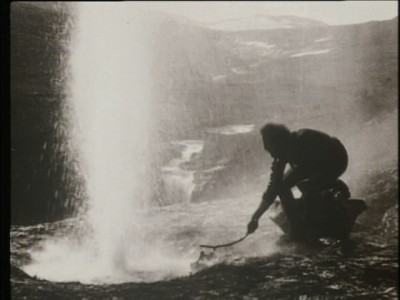 Another character Sjöström introduces to the film is the mountain itself. More than just a background, it acts upon the other characters just as a person would. It's a gorgeous place for the last acts of the film, but Sjöström also reminds viewers that it is very dangerous. Filled with deadly cliffs and the home to ferocious storms, these hilltops are a lovely place to live, but can also bring death in an instant.

The film is accompanied by a new score (the score that was written for the premier has been lost) written by Torbjorn Iwan Lundquist and performed by a four piece orchestra. I didn't really enjoy this score as much as I have other pieces written for other silent films. It seems to distract from the movie at times and overpowered the action on screen. There were times when the musical themes didn't change when the scenes changed which gave the film an odd feeling. For example there's some discordant music playing when a man is beating a young boy who lost two of his lambs, which works fairly well, but the same jarring music continues to play as the narrative changes to a man sheering his sheep which sounds very odd. There were some sections that were aided by the score, the harvest festival for instance, but overall this wasn't my favorite score.

The tinted full frame video was pretty good overall. The print has a few spots, but less than I was expecting, and the level of detail in the close-ups was good. The contrast left a little to be desired in some places though. Some of the indoor scenes are dark with the background details obscured by darkness. Some of the exterior scenes are a bit too bright too, with details blooming somewhat. Even with these problems, which don't mar the entire film, the image looks nice.

This disc also includes a 1981 Swedish documentary on the director. It's presented in its original language with optional English subtitles. I wasn't too impressed with this look at the famous director/actor. It's very superficial and doesn't delve into his films or acting career with the depth that I was hoping for. The time when Sjöström was in Hollywood (where he was credited as Victor Seastrom) where he made several movies including the Scarlet Letter with Lillian Gish was covered in two minutes flat. There was a brief interview with Ingmar Bergman who was greatly influenced by Sjöström, and clips from his films, but aside from that the docu was uninspiring.

Though the first act is a little slow, the film is a joy to watch and works itself up to a riveting conclusion. It's by no means a feel-good film, but with realistic and complex characters this movie has more in common with the 21st century drama than the melodrama that were common at the time it was made. Kino has come up with a nice print and though the soundtrack wasn't my favorite, this DVD is still worth owning. Recommended.