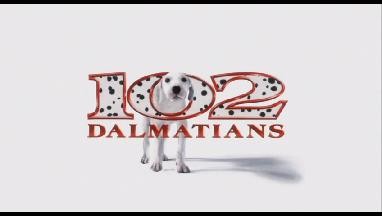 The first live action outing for our cute Dalmatian friends did pretty well for itself. Every kid wanted to see it, and every parent probably felt it was a safer bet than watching another rerun of Shining Time Station at home. So of course, Disney grabs the opportunity to suck money unnecessarily out of the wallets of hard working adults, and made 102 Dalmatians. We've already seen all the dogs perform their tricks on-screen. The real trick is figuring out if Disney was able to create a brand new story based off the beloved classic. How do you take a classic character like Cruella De Vil, as well as the Dalmatians themselves, and make a story that can live up to the original? The short and sweet answer is, you don't. You mix a couple of doses of yawn worthy plot with a dash of new characters, and you have yourself a sequel my friends.

Cruella De Vil has reformed from her wicked ways. She's had a trigger assigned through therapy that makes her love animals, and this was done by none other than Pavlov. You know, the guy who was able to make dogs salivate at the ring of a bell? Cruella even goes above and beyond a normal appreciation for animals, and even helps out in an animal shelter for a while. Her parole officer, Chloe, is a Dalmatian lover and has a hard time swallowing Cruella has truly changed, and keeps a close eye on her. Cruella predictably ends up going back to her evil ways after hearing Big Ben ring-a-ding-ding, and plots once again to kidnap adorable Dalmatian pups.

I wish there was a bit more to say about this film than that, but there isn't. It's more of the same, if not less than that. The dogs are all once again kept 'real', and as a result, seem to be nothing more than dogs doing trained tricks on screen in a big way. As I mentioned in my earlier review of the live action 101 Dalmatians, reducing the dogs to a supporting role for the sake of realism just isn't going to cut it. Sure, children are going to love watching cute animals give Cruella what she deserves, but I can't imagine anyone else finding any redeemable qualities to this sequel.

Glenn Close did Cruella De Vil justice in the original live action rendition of the classic, despite the fact she dangerously walked the line of being a little over top on a few occasions. Everything has to be upped for a sequel however, and Glenn does cross that line from time to time. She still has a fairly consistent grasp on Cruella, but seems to lose control of the reins during her second outing as the black and silver haired devil.

All the characters step over the line of what would be considered good taste in acting though. Everyone is either so sweet they'd give you tooth decay, or they're so mean and snarly they look like fools. There's a mixed message going on here, isn't there? You make the dogs more realistic by taking away their character presence, yet you make the humans act as grotesquely cartoonish as possible. The first film at least attempted to have a little more of a human presence with Roger and his newlywed, but this film lacks the small amount of humanity that was barely present even then.

Very little context fills the screenplay, and acts merely as a film to display the talents of some very fine trained animals. The kids are going to have a great time, and just like with the first live action attempt, there's little else for an adult to appreciate besides being saved from some truly watered down children's material. This movie is boring and dry, with Glenn Close the exception to the rule.

This film is presented in an aspect ratio of 1.85:1, and although it's THX certified (insert jokes about edge enhancement here), it's not a spectacular looking title. There are still marks and specks that appear on screen from the film, but it's not as rampant as it was on the recent release of the live action 101 Dalmatians. Colors seem nice and natural, but they appear to look muted ever so lightly. This I believe is contributed to the fact that this transfer looks like film, not an overly digitally enhanced transfer. There's a little grain on occasion, as well as some very minor blocking that happens in darker shaded tones. Black levels are good and help provide a pretty nice contrast. And to wrap it up with a minor complaint, the film appears to be a little on the soft side at times.

The back of the box says this was digitally mastered, but at this stage of the game, perhaps a digital remaster would have been more appropriate. All in all, it's not a bad transfer. It's a decent transfer, but I would never go as far to say that it's 'very good'.

Two tracks are presented on this disc, which is a step up from the prior installments offering, which sounded pretty bland. The DTS 5.1 track is pretty immersive and offers a nice dynamic range. The bass never seems to provide a solid punch, which is a little disappointing. I mean, the movie starts off with that 'bow wow wow yippee-yo yippee-ay' nonsense, which should have brought the movie in with a little power. Besides the lack of impressive bass to go with the nice range this track has to offer, it sounded pretty darn good.

The Dolby Digital 5.1 track still sounded pretty good, although had a little less of that wonderful dynamic range the DTS track had to offer. Also included in Dolby Digital are tracks in French and Spanish, and there's also Spanish subtitles. I'll never understand why certain languages that get the attention to be subbed, can't have subtitles to go with them. Apologies for those who prefer French! 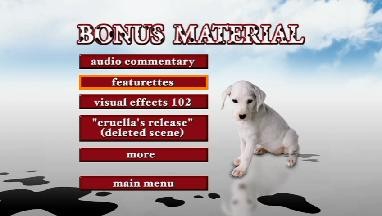 Audio Commentary with Director Kevin Lima plus Animal Coordinator and Trainers - It's an incredibly dull commentary. I'm all for a commentary if there's something interesting that can be said, but most of the information is about what went on behind the scenes to train animals. The animal trainers weigh in a lot, and the director talks about some of the difficulties there are trying to get a movie together while working with animals. Do yourself an incredibly big favor; skip the commentary unless you love to cry from boredom. You can thank me later. Donations are also acceptable.

There are a series of three featurettes that have a total length of about eighteen minutes or so. These are also not entirely informative, but I feel I got more out of these than the commentary. We get a shorter and more appropriate look at working with animals, bringing the character of Cruella to life, and some behind the scenes stuff. A lot of what we're given despite being better than the commentary, is also fairly uninformative.

Visual Effects 102 - These feature is split up into four brief spots, no pun intended. We're given some brief education on what kind of computer work had to be done in order to make birds talk, remove spots from a dog, creating dogs from scratch with CGI, and then throwing everything together in the final product.

Cruella's Release - Do you really mean it?! We can get one whole deleted scene? This was a scene that was meant to reinforce the idea that Cruella was truly reformed. There's director commentary you can choose to listen to with this, and he admits himself that this scene was redundant. There are other moments in the film where I could echo the same idea though. Nothing exciting to see here, the commentary with this is dreadful as well, and it's the only deleted scene available. I don't think I need to elaborate on this any further.

Puppy Overload - At just over a minute, this is just sort of a promotional montage for the film.

Dalmatians 101 - This feature informs viewers the personalities of Dalmatians, just in case they were planning on purchasing one themselves after seeing their cuteness on the big screen. This seems informative, as short as it is. If anyone is going to buy a pet they should know what they're getting into.

Also included is a soundtrack promo, and the original theatrical trailer

There's a DVD-Rom feature that lets you design for Cruella, whoopee. I'm sure you sense my enthusiasm.

Disney has done an awful job at providing extras for this release. It's a bunch of dried up dribble, or filler to impress anyone that sees the list of features on the back of the box.

Bow wow wow, yippee-yo yippe-NAY. Stay clear from this one. The first live action film in this franchise seemed to lack any charisma or heart, at least in my opinion. However, that film seemed almost like a masterpiece when compared to this one. Everything in this movie gradually gets sillier and sillier, and in true form of Disney sequels (Pixar excluded), this one can't hold a flame to its predecessor. Skip it, and if your kid is dying to see it, rent it... but only if you must. 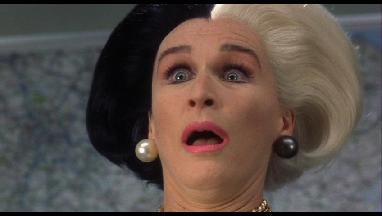 Don't look so shocked Glenn, really. You should have known better after doing one of these. What's truly shocking, is the MSRP Disney is asking for this!