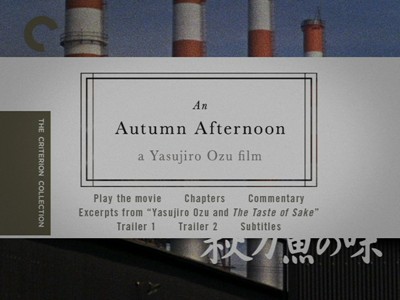 Yasujiro Ozu's motion picture career spanned half a century. In that time, the Japanese master established a signature style, creating mildly paced stories about regular families that quietly explained how the bonds of blood and commonality of our day-to-day struggles were stronger than the divisions between generations and anything modern life could throw our way. Ozu had a strong sense of tradition, but after World War II, he also gradually accepted that Japan was evolving. In his later work, he looked for a balance between the past and the future, and in his final film, the fitting good-bye An Autumn Afternoon, Ozu found it.

Released in 1962, An Autumn Afternoon (Japanese title: Sanma No Aji) is primarily about the Hirayama family, but Ozu also takes the time to look at some of the lives in their extended circle. The head of the family, Shuhei Hirayama (Chishu Ryu), is a widower living with his only daughter, Michiko (Shima Iwashita), and his youngest son, Kazuo (Shinichiro Mikami). His eldest boy, Koichi (Keiji Sada), is married and living in his own apartment with his wife, Akiko (Mariko Okada). Hirayama is a war veteran, having captained a battleship, but he now works in a quiet office. When one of the ladies in his office announces that she is leaving to get married, it starts Hirayama thinking about his own daughter, who is in her early twenties, and if maybe she should get married, too. Coincidentally, his best friend Kawai (Nobuo Nakamura) has been thinking the same thing, and he has found a match he thinks would be perfect for Michiko.

At the same time, Hirayama's regular lunches with his school chums Kawai and Horie (Ryuji Kita) are now spilling over into a forty-year class reunion. It is attended by one of their teachers, an old man they had affectionately nicknamed "the Gourd" when they were children. The Gourd (Eijiro Tono) now runs a noodle shop, where he lives with his daughter. She never married so that she could take care of her father. Michiko has given the same excuse for not moving out on her own, and though Hirayama doesn't want to admit it, he sees a similar fate to the Gourd for them both if he doesn't let go of Michiko and get her to let go in return. 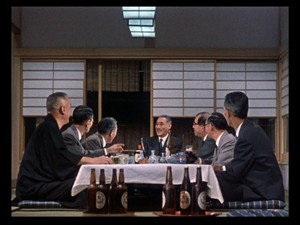 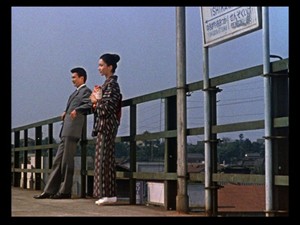 There is an overwhelming sense of nostalgia in An Autumn Afternoon. With Hirayama as the central character, Ozu creates a variety of scenarios that compel the character to look backward and contemplate where he is going. So, too, is the filmmaker looking back, surveying the cultural landscape he has traversed to get to this point. Co-written by Ozu and Kogo Noda, it's hard to think of a more effective summation of a career than this one. Though the subplot between the older students and their teacher will find its place as the main plotline in Akira Kurosawa's farewell, Madadayo, several decades later, I don't think Kurosawa managed the full scope of self-reflection that Ozu does. In Madadayo, Kurosawa fittingly paints himself as the teacher pondering how his lessons have affected a generation of students, whereas Ozu couldn't be anything but the father, less concerned with the impact he's had already and more worried about how to get out of everyone's way. (Given Ozu's regular ensemble of actors that he employed again and again, the notion of the director as a father figure coordinating a family doesn't seem all that that far-fetched.)

As a counterpoint to the perhaps more traditional situation where Michiko sacrifices her independent happiness to serve her father, the older son Koichi and his wife live a modern existence where they embrace more Western luxuries like golf clubs, vacuums, and refrigerators. They even eat ham and eggs, which isn't quite your average Japanese cuisine. Yet, it's also telling that they are completely dependent on Hirayama, having to borrow money from him in order to have these luxuries. The father doesn't mind, however, he feels that young people should go out and forge their own way, and he's more than happy to help. When Hirayama runs into a sailor who had been under his command in the war, that man (Daisuke Kato) wonders what life would have been like if Japan had won and were now influencing American youth to be more Japanese. Hirayama meekly responds that he thinks he feels it's best that Japan was not the victor. It's at least quieter this way. Change is all right by him.

Though, Hirayama is not entirely ready to be a full part of that change. His friend Horie has remarried, taking a much younger woman as his bride. He encourages Hirayama to do the same. (He also encourages him to take some kind of pills for male stamina. An early prototype for Viagra?!) Hirayama even indulges a mild crush on a bar hostess (Kyoko Kishida) that reminds him of his dead wife. He's very sweet when he talks about her, noting that they don't look the same when you look close, but really being far more romantic in that what he is treasuring is the essence of his companion and not just her physical appearance. He never does anything about these unrequited feelings, though perhaps he would have had Koichi been more supportive of them. As the older generation encourages the younger to move forward, it doesn't apparently cut both ways.

An Autumn Afternoon ends on a bittersweet note. I think a large part of the film's honesty comes from the fact that Ozu doesn't push his character into a complete, unreserved acceptance of how times have changed. I doubt he felt that way himself; instead, the wisdom of age had taught him that his time had passed. The first shots of the movie are of a factory and its smokestacks belching waste into the blue sky, an image of the industrial age. The final shots are of Hirayama sitting alone, a little drunk, on his daughter's wedding night, quietly drifting into sleep. You couldn't get a sharper contrast than those two pictures. It's a gentle reminder from an elder stateseman that even if we accept the new inventions of our modern age, we must never forget the human element.

It's also a farewell from a master filmmaker handing the baton to a new cinema (even if Ozu was preparing a new film when he died). With technology changing and the possibilities for cinema that lay just around the corner, Ozu's message seems prescient. No special effects can ever replicate what he has done as a director. It takes heart and soul to depict a story with heart and soul. An Autumn Afternoon has plenty of both, setting the standard even as its director stepped aside. 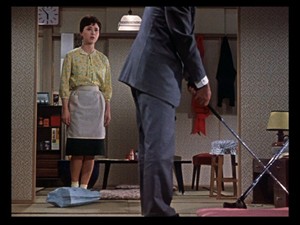 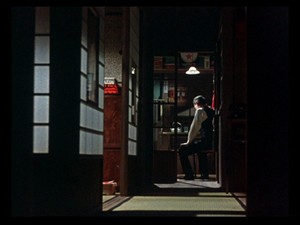 Video:
The Criterion DVD of An Autumn Afternoon presents the color film at its original 1.33:1 full frame aspect ratio, picture-boxed (a.k.a. window-boxed) so that there are black bars on all four sides of the frame. The colors are a little pastelly, but not at all far off from what films of that period tend to look like. Though the image is largely free of dirt and scratches, there is a graininess to the picture that persists through the film, as well as a slight background flicker.

One technical glitch that surprised me was in one of the first scenes in the movie, at about the 5:00 minute area, when Hirayama and Kawai have their first conversation. A couple of times the image slowed down and dropped out of sync with the audio for a second or two. I tried the DVD on two different players, and it happened both times. My disc is slightly scratched, as it arrived loose in its case, so it's possible that this is due to those marks and not a manufacturing error; please feel free to drop me a line and let me know if it happens on yours, or make mention of it in the DVD Talk forum. UPDATE: Michael Kerpan writes to say:

"Alas, the glitches you describe early on in the film seem to be a feature of ALL current DVD versions (that I know of) -- and even the currently circulating prints. I was hoping that this problem could have been fixed by Criterion -- as there used to be a French DVD that did not show this problem."

Sound:
The original Japanese soundtrack is given a mono mix, and it sounds very good, with no crackles, pops, or extraneous hiss. The dialogue is clear. Ozu runs a subtle musical score through a lot of the movie, and that, too, hits the right level of not calling too much attention to itself while buoying the action.

The optional English subtitles are well written and easy to read.

Extras:
The 28-page booklet in the DVD case features photos, chapter listing, cast and crew credits, and two text pieces: an essay on the film by critic Geoff Andrew and an examination of Ozu's diaries by Donald Ritchie. 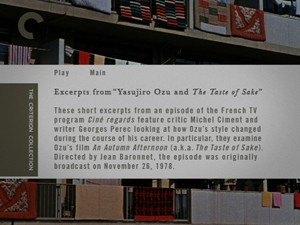 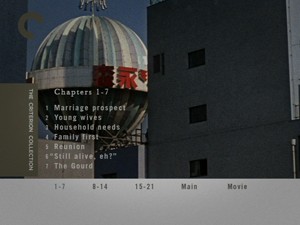 The full-length audio commentary by author David Bordwell (Ozu and the Poetics of Cinema) is a fantastically detailed deconstruction of the visual and thematic construction of the film. Shot by shot, Bordwell explains how each set-up reverberates through the story at large.

There are fifteen minutes from a 1978 French television show called "Yasujiro Ozu and The Taste of Saki." Recorded as France was discovering Ozu, the excerpts focus on An Autumn Afternoon and seek to understand the essential Japanese qualities of the director's films. It features commentary by critics Michel Ciment and Georges Perec. The latter is so pretentious, I recommend standing in the back of the room when you watch this in case the urge to punch your TV screen overtakes you.

There are two trailers, one made as a teaser while the film was still in production and one released just before the movie was released. Both feature short shots of Ozu at work.

FINAL THOUGHTS:
Highly Recommended. An Autumn Afternoon - Criterion Collection is a beautiful elegy for a distinguished career. Even if Yasujiro Ozu hadn't intended his 1962 feature to be his last, it couldn't be a better summation of his skills. Following a father who sees that it's time to pass the torch to the younger generation and see his children pursue their own lives, An Autumn Afternoon crosses generational lines to give a vivid portrait of an extended Japanese family. Ozu juggles parallel storylines that comment on and complement one another, creating a masterpiece that is full of an understated pathos and guided by a deceptively simple visual mastery. An Autumn Afternoon is touching and wonderful, and it's certainly not to be missed. 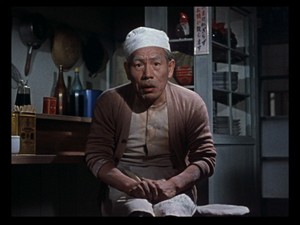 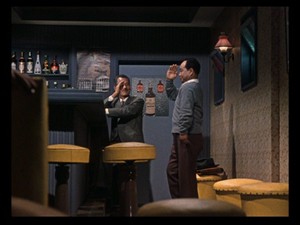