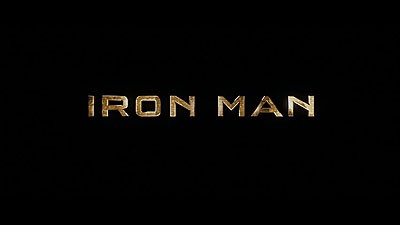 
The Movie
When I was a kid, seeing a film like Iron Man would have been like experiencing nirvana. It's a pretty good ride now, but at a time when comic-book movies weren't a summer guarantee (or hell. a possibility) to see one of my four-color heroes so perfectly translated to the big-screen would have made me a man in the span of a night at the cinema. Instead, I was stuck with weak Spider-Man TV movies, so now I can only imagine what it's like to experience such spandexed spectacle with the wide eyes of a child.

Now, as a slightly-less wide-eyed adult, I get to enjoy Iron Man as the well-crafted bit of popcorn filmmaking it is. The story of industrialist Tony Stark (Robert Downey, Jr.) has been brought forward in time, putting him in the more topical war zone of Afghanistan, where he is nearly killed, saved only by a crude device intended to allow him time to build the enemy the weapon they desire. Instead, he builds a suit of mechanized armor and saves his hide, in the process learning that the weapons that have made him rich cause harm to innocent people. Thus, he develops not only a conscience that makes him want to stop selling arms, but also a more advanced suit to stop the damage he's done. As a result, he makes an enemy of his second in command, Obadiah Stane (Jeff Bridges), who doesn't take the idea of getting out of the weapons game well. 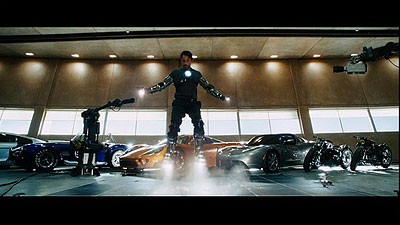 As with most first films for superheroes, Iron Man's origin had to be covered, and the film does a nice job of it, jumping back and forth in Stark's pre-Shellhead life, spending the first hour establishing who he is as a man, namely a cocky, ingenious playboy, which is key, because once he dons the armor, his face is obscured, and the viewer needs to know and believe the man behind the mask if there's going to be any meaning to his battles. In that area, the film couldn't have a better weapon at its disposal than the man himself.

This is a film truly made by its casting, as Downey, Jr defines the character in the way that only truly iconic performances can. I don't know if I could see someone else in this role, as he is perfect as a flawed man struggling with finally growing up after an extended adolescence. The fact that he's doing so in a high-tech zoot-suit is almost secondary to the story until the basically obligatory final battle, because the clothes do not make the man in this film. It's odd to watch a blockbuster where the action scenes aren't the focus, but watching Stark craft the suit and learn to make it work is more fun than your usual "training montage" because you can genuinely buy his enthusiasm (plus the fact that the effect of his flight looks so real doesn't hurt.) The big battles aren't bad and are well-paced across the length of the film, but they are short and limited in their scope, so if you're looking for mindless explosions, this surprisingly isn't the place to find them.

They say a hero is defined by his villains though, and in that case Downey, Jr. got some serious help from Bridges, who delivers as Stane, aided by a shaved head and fearsome beard, making him scary as hell. Bridges practically plays two characters in the span of the film's two-hour run, transitioning from friendly to frightening with the ease of a serial killer. I don't remember Bridges ever playing it so dark before, but he really should do it again.

Heroes also need sidekicks, and Stark has an impressive crew, with his gal friday Pepper Potts (Gwyneth Paltrow), his military buddy James Rhodes (Terence Howard) and his unseen electronic "butler" Jarvis (voiced by Paul Bettany) by his side. Paltrow plays it demure as the assistant to Iron Man (and possible romantic interest for the gadfly) while Howard is good, though he doesn't have a lot to do (a situation that should change in any sequel, if a nod to the fans in the film is to be believed.) There's a real economy of cast, as there aren't many key characters, with Shaun Taub, Faran Tahir and Leslie Bibb rounding out the cast and doing it well, which allows the leads, especially Downey, plenty of screentime to shine.

When it was announced that the film was being directed by Jon Favreau, many questioned the choice, as he had never done a film even close to the tone or scope of Iron Man, but apparently all he needed was the human touch his movie have been known for, some special effects experience (earned from Zathura) and an understanding of the concept, as the film looks terrific, thanks in part to DP Matthew Libatique (a Spike Lee and Darren Aronofsky collaborator) and the whole thing comes together smoothly, including some smart style choices that enhanced the portrayal of ol' Shellhead. It's the rare comic-book adaptation that pleases the characters' original audience (aided by plenty of small bits from the comics,) the summer-movie fans and the critics, but Iron Man has done the trick for just about everyone who's seen it, 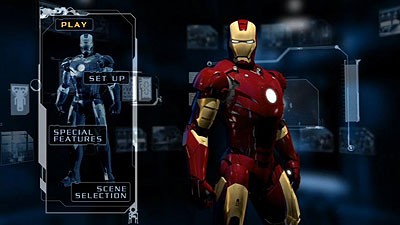 The DVDs
The film arrives as a two-disc set that's packed in a standard-width keepcase with a tray. Though the discs are the usual bland gray platters from Paramount, on the outside the set looks great, with a die-cut, foil-embossed slipcover revealing holographic cover art that's pretty damn cool. The DVDs feature a visually-impressive CGI menu system with Iron Man manipulating the options, which include playing the film, selecting scenes, adjusting languages and checking out special features. Audio options include English, French and Spanish Dolby Digital 5.1 tracks, while subtitles are available in English, Spanish and French, along with closed captioning.

The Quality
The anamorphic widescreen transfer on this film looks terrific, as one would expect from such a spectacle. The color and detail is fantastic here, and the clarity of the image doesn't negatively affect the frequent use of computer animation, allowing it all to blend into beautiful realistic fantasy. There are no issues with dirt, damage or digital artifacts.

Oddly, the sound of the film isn't nearly as bombastic as one would expect from an action superhero film, but what's there is good, especially during Stark's efforts to learn to fly, where you can hear his jets zoom around from speaker to speaker. Comparing the climactic battle here with the chaos of Optimus Prime's blowout battles in Transformers leaves this film on the short end of the stick sonically, but if you just let loose, it's an enjoyable time.

The Extras
There's a hefty amount of material to get through here, but let's start with what's not here, and that's a commentary by Favreau. After his quality track on Elf and the excellent commentary on Zathura (with Iron Man exec-producer Peter Billingsley, I hoped for another chance to hear his thought on this, his biggest film to date, but it wasn't to be. Instead, disc one starts with a collection of 11 deleted/extended scenes, which run 24 minutes. These are mostly of the extended style, and the cuts were smart ones, as these scenes feel bloated and overlong compared to what's in the actual film. Replacing the ending you can check out here was also the right move, as it just comes off as hack.

Along with a few previews, there's a trailer for a Nickelodeon Iron Man cartoon starting in 2009. It's nothing I'll be checking out, as it seems to be another attempt to simplify and de-age a Marvel character.

Disc Two holds the rest of the extras, beginning with "I Am Iron Man," a seven-part documentary on the film that runs a feature-length 1:18. Starting with the movie's pre-production efforts in 2006 and following Favreau and company all the way to the film's premiere, it's an extensive and interesting look at the production of a major film, including the headaches of finishing a special-effects-heavy movie and even how the titles were designed. That it's not all sunshiney and great makes it all the more interesting than your usual behind-the-scenes featurette.

Another lengthy piece follows, as the six-part, 47-minute "The Invincible Iron Man" traces the steps of the character of Iron Man in the comic books, via interviews with a variety of writers and creators, including Stan Lee, Warren Ellis, Joe Quesada and Adi Granov. In watching this featurette, which focuses heavily on recent storylines like Extremis, one might think it's a promo effort to push Iron Man comics, as anyone without a working knowledge of the comics' recent history may feel a bit lost at times, especially when references are made to comics with no explanation as to who is who.

More info about the amazing suit of armor and all the important special effects is found in the 27-minute "Wired: The Visual Effects of Iron Man." This picks up some of the computer art elements covered in the feature-length documentary and goes into more detail, filling viewers in on how the look of the film was achieved. Combined with the other two pieces, it forms a trio of elements that covers much of what went into the film.

The remaining material is from the "found" category of content, including a six-minute screen test with Downey, Jr. and a rehearsal clip of Downey Jr. and Bridges working out a scene with Favreau. It's fascinating to get the chance to see how the character of Tony Stark was molded in Downey, Jr.'s hands, and simply just getting in on an insider's view of how the actors prep.

Also on this disc is the hilarious 2-1/2-minute story from The Onion News Network, about the adaptation of the Iron Man trailer into a feature-length film, and an assortment of image galleries, with concept art, tech, unit photography and posters. The Onion story is hysterical, and the art galleries are fun to check out as well, though there had to be more than three poster concepts. 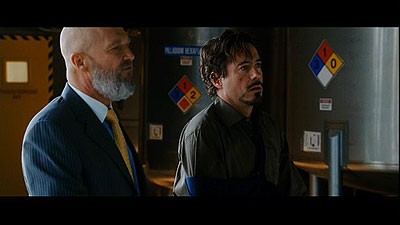 The Bottom Line
In a pantheon of superhero movies that features movies like Spider-Man and X-Men, Iron Man is the exception to the rule, focusing far more on inner battles than big fights. Part of that is the incredible performance by Downey, Jr., who now simply owns the character of Tony Stark for life, while Favreau and his crew pulled together one of the tightest two-hour movies I've seen. The DVD, from the packaging to the menus to the quality and the extras, is an equal match for the quality of the film, and though there are certainly some quibbles that can be had, it's one of the finest packages I've seen for a mainstream blockbuster is some time.