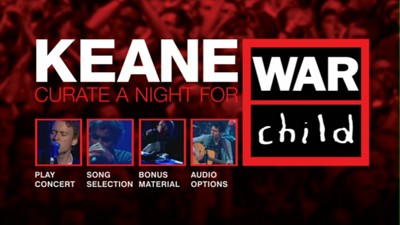 I first heard of the War Child charity back in the mid-'90s when they released the Help album, an awesome compilation featuring new tracks by the most popular British bands of the moment, recorded in one day and released to shops within a week. (This was in the stone age before downloads, mind you.) The compilation was intended to raise money to help children in war-torn areas around the world, which was the main goal of the charity. In the years since, I have regularly seen the organization's name connected to many of my favorite bands, as the charity has cultivated a healthy and lucrative relationship with international musical artists of all kinds. The pop trio Keane have worked with them multiple times, contributing exclusive tracks through various avenues, culminating in several nights of music featuring other acts personally chosen by the band. Keane Curate a Night for War Child documents one of those evenings, filmed last fall at the Brixton Academy in London.

Despite being a night for charity, there is very little proselytizing. After a brief introduction by Keane vocalist Tom Chaplin, the purpose of the evening is really only mentioned twice, each time giving out a number people can text message to make donations. The DVD--the purchase of which also benefits War Child--is about the music, and the program is set up as a no-nonsense, rapid-fire succession of bands.

Of the seven acts featured on Keane Curate a Night for War Child, the first two are the only ones I was unfamiliar with. Teddy Thompson opens the show with two country-flavored numbers, playing an acoustic guitar and backed by a string quartet. He is followed by Findlay Brown, an equally quiet singer but with a more traditionally structured band. Their tunes seemed to fit neatly in the same school as Keane, but maybe with a bigger nod to David Gray. (Remember him? I wish I didn't.) The songs are decent, but it's a slow start to the concert.

Next Brendan Benson, who is best known as part of the Raconteurs, is joined by Keane to run through two of his solo songs, "Cool Hands (Warm Heart)" and "Tiny Spark." It's a confident performance, and the songs sound similar to his Raconteurs material but without the crunchy Jack White guitars. This is followed up by mellow rock band the Magic Numbers performing "Love Me Like You," another smooth track, still keeping things pretty calm.

Surprisingly, it's synth-pop veterans the Pet Shop Boys who finally get things rocking. Backed by their touring band, Neil Tennant and Chris Lowe run through recent up-tempo number "Integral" and mid-'90s classic "Being Boring." They sound great, though Neil's vocals are maybe a little too low in the mix. They change the mood into something a little more upbeat, setting the stage for Keane to return, this time backing adorable pop chanteuse Lily Allen. Lily is one of my favorite new performers of recent years, and she seems to be having fun working with the band on versions of her own "Smile" and the highlight of the evening, covering Keane's "Everybody's Changing." Her vocals for the track are softer than Chaplin's, coming off as more child-like and thus more sad, bringing a feeling of lost innocence to the lyrics.

Since it's their show, Keane close out the night and also get the most tracks on the disc. Their then-recent single "Crystal Ball" raises the volume, while their earlier hit "Somewhere Only We Know" brings it back down again. Benson rejoins the band, along with a bass player, for a credible cover of the Queen/David Bowie song "Under Pressure," and then the night ends with a big sing-along on the lovely "Bedshaped." Keane are an interesting band live, as the main instrumentation is just keyboards and drums, and with the other two members of the band sitting down through the set, it leaves Tom Chaplin to work the crowd all on his own. I saw them several years ago in a very small venue, and Chaplin owned the stage; I'm not surprised to see him be just as effective in a larger arena. 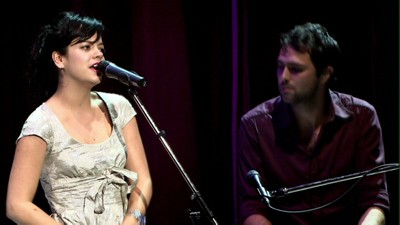 Video:
Keane Curate a Night for War Child is shown in a widescreen 16:9 format. It's a clear picture with nice color values. There is a hint of digital combing at times, but nothing too drastic.

Sound:
There are three separate audio tracks to choose from: DTS Digital Surround, Dolby Stereo, and Dolby Surround 5.1. The mix is excellent, with al of the bands sounding really sharp. Only the Pet Shop Boys, as I said, could have used some tweaking, the vocals sound a little low.

Extras:
Keane Curate a Night for War Child is housed in a standard, clear plastic case with a double-sided cover. There is a one-sheet, folded paper insert with photos of the performers and more information about the War Child goal.

The supplemental section of the disc contains a bonus song by the band the Guillemots, a track called "Trains to Brazil." There is also an 11-minute, 45-second featurette of backstage footage featuring interviews with the bands about the night and the charity, as well as rehearsal footage, some of which appears to be taken from a separate event at the Manchester Apollo. 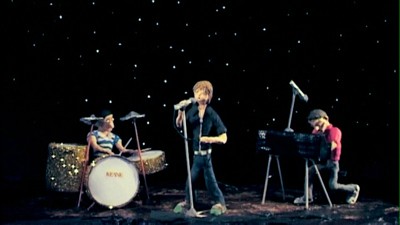 The other three featurettes center around the Keane single "The Night Sky," which was only commercially released as a benefit record for War Child. The claymation video for the song was made by British school children (supervised by the clip's director) and was inspired by real stories from children in war zones. We get the video in full, an 8-minute piece showing the students at work, and just over 2 minutes of a few of the kids reading the stories that touched them and inspired scenes in the video. "The Night Sky" is currently available from iTunes.

FINAL THOUGHTS:
Recommended. All in all, Keane Curate a Night for War Child is a good concert with some truly excellent performances. Even the bands I didn't know or aren't as interested in don't whiff it, they all bring their best to the stage. It may not be a great DVD for those who aren't already digging on at least some of the bands, as the shortened sets don't really give you that much to go on when assessing how the groups really sound; still, if even just a couple of the artists strike your fancy, it's worth it. (Pet Shop Boys and Lily Allen fans, in particular, will have a hard time passing this disc up.) Plus, it's for a good cause, so if nothing else, you'll earn a couple of karma points for picking it up. 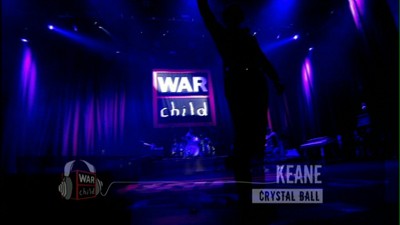