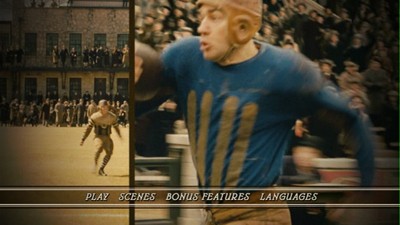 Every year there is a handful of movies that, for whatever reason, don't get a fair shake critically or at the box office. The cultural zeitgeist lines up against them and forms a united front that says, "No way, fella, you ain't getting through." One of these movies for 2008 is George Clooney's third directorial effort, Leatherheads. It's not that I think Leatherheads is a great movie, by any means, but from the way critics piled on it when the movie was originally released, I would have expected it to be some kind of undercooked turkey where if the ptomaine poisoning didn't get me, I'd at least choke on a bone. Instead, it's an amusing soufflé that probably falls more than it rises, but there is still some good eatin' if you want to break through the parts that don't look so good. I guess people just wanted to see Gorgeous George trip and fall for once, but now that we're past all that and this screwball football comedy is out on DVD, hopefully open-minded film fans will give it a second chance. There are certainly worse choices you could make for you evening's home viewing.

Clooney pulls triple duty as director, producer, and star (and probably a little off-the-books rewriting, too). He plays Dodge Connelly, an old pro in the early days of organized football in the 1920s. At the time, the movie tells us, the pigskin parade was less about ability and sportsmanship and more about on-field antics and dirty tricks. Audiences were growing bored of the free-for-alls and looking to college football instead, an arena where the integrity of the game was better protected. Seeing a chance to save his job, Connelly recruits Ivy League golden boy Carter Rutherford (John Krasinski from TV's The Office) to join his team, the Bulldogs. A war hero with a squeaky clean image (and various endorsement deals for hygiene products to prove it), Carter starts to attract attention. He also attracts the scrutiny of the press, especially when one of his fellow soldiers steps forward to call him a fake. Intrepid reporter Lexie Littleton (Renée Zellweger) is sent to get the real scoop on Carter so that her paper can stick a pin in his rapidly growing popularity. Of course, Dodge falls for Lexie who in turn falls for Carter who is already smitten with Lexie, but then she also falls for Dodge, and then Dodge and Carter get into it, and they all have to decide what they love more: the game, the fame, or the ecstasy of it all.

With Leatherheads, Clooney is making a cover version of classic comedies of the 1930s and '40s, not unlike what his buddies the Coen Bros. have done with movies like The Hudsucker Proxy and Intolerable Cruelty (another movie that, for my money, deserves a far better reputation than it has; you're not going to find a better Preston Sturges homage anywhere). It's a fun idea and a great setting, and everyone makes a good run for the goal line, but lurking somewhere in the midst of this hoopla is a Lucy Van Pelt waiting to yank the ball away from this particular Charlie Brown. Everything about this production demands that it should be better than it is (and, again, it's not as bad as you've heard), and yet, it just isn't. 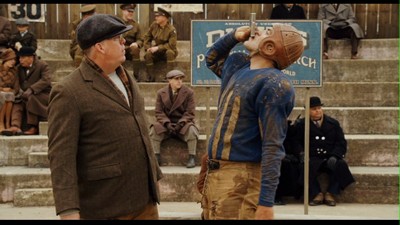 To get at what's wrong with Leatherheads, let's first talk about what is right. The problem isn't, for instance, the acting, because the performances here are really strong. Clooney and Zellweger are both perfectly suited to this kind of comedy, and if they ever need a little cash, a dinner theatre tour of His Girl Friday with George as Cary Grant and Renée as Rosalind Russell would be a smash. With main supporting roles filled out with guys like Jonathan Pryce (Brazil) and Stephen Root (Office Space), Clooney even manages to populate his backfield with dominating players. Only John Krasinski comes off as a little out of place. Perhaps he's just too cute or too likable or too familiar, but he never really gels with the setting or the tone of the movie. He's passable, though, and certainly not enough to ruin Leatherheads all by his lonesome.

It's not a lack of visual joi de vivre that causes Leatherheads to fumble, either. With both Confessions of a Dangerous Mind and Good Night, and Good Luck, Clooney has proven himself more than capable of handling a camera, and Leatherheads is no exception. The period sets and costumes look great, and all of his time working for the Coens and Steven Soderbergh has continued to pay off for George, giving him proper role models for staying fast on his feet and continuously inventive with his shots. The story is also rock solid and full of some great one-liners, so he really only has to follow the material and he's mostly going to be all right.

When I first saw Leatherheads in the theatre earlier this year, what struck me as the problem area for the movie was the editing, and that is only confirmed for me on DVD. What Clooney wanted to do was make a Howard Hawks-style screwball comedy, and he's got almost all of the elements that made a Hawks film like Bringing Up Baby sizzle, except one: speed. Allegedly, when Hawks directed the aforementioned His Girl Friday, he shot two pages of script for every one minute of film, bucking the standard ratio of one to one. He had actors talk over one another, coming in immediately with the next line as the previous line ended, cutting out all the breaths and the pauses and keeping it moving at high speed from start to finish. If Clooney were to take Leatherheads back into the editing room and tighten it up, trimming every gap he can spare, I think it would make Leatherheads a much different film, certainly closer to what its creator intended.

Instead, Leatherheads is a passable comedy good for a decent amount of chuckles and at least worth watching for the comedic performances of two great leads working at the top of their craft. If nothing else, the movie didn't deserve all the vitriol simply because Clooney gave an honest effort to make an authentically funny movie. Given most of the dross that passes for a big studio idea of comedy these days, that at least deserves an extra star on a critical rating all on its own. I don't even fault him for trying something different and casting John Krasinski. I like Krasinski, and his name on the poster doesn't scream "Desperate Cash Grab!" the way the names "Ashton Kutcher" or, God forbid, "Dane Cook" do. Sure, you may put Leatherheads out of your mind immediately after you've finished, it's that insubstantial, but you won't want to force it out the way you would had you just watched Good Luck Chuck or What Happens in Vegas.

So, pop some popcorn, open up your beverage of choice, and sit back with Leatherheads. I think you'll be more surprised than disappointed. 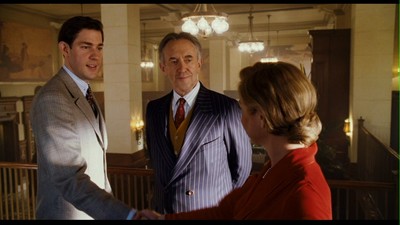 Video:
Leatherheads is shown in a widescreen anamorphic transfer preserving its 1.85:1 aspect ratio. Colors are nicely rendered, with excellent warm tones and very good darks, as well. I didn't really see any edge enhancement or soft resolution. The film has made a good transfer to DVD.

Sound:
There are three Dolby Digital 5.1 options: the original English, and French and Spanish dubs. All three languages also have subtitle tracks, with the English track being geared towards the deaf and hearing impaired.

The English mix is a very good audio track. There is a decent use of the soundscape to give added atmosphere to the effects in the larger scenes, but also admirable restraint that gives the dialogue the prominence it deserves.

Extras:
There are a variety of extras on the Leatherheads DVD. The lead is a full-length audio commentary with George Clooney and producer Grant Heslov. Though it drags at times, the track is largely entertaining, mainly due to Clooney's sense of humor and the chummy rapport between the two guys. The pair doesn't go off on too many tangents, largely staying specific to each scene, discussing how they achieved the shots and casting, etc. Clooney also talks about developing the story and references the films that influenced him.

Nine deleted scenes, totaling just over 8 minutes, are largely incidental moments, extra pieces from the field and locker room, more showing the business practices of Jonathan Pryce's agent character, etc. The most substantial scene is from during one of the train rides after Carter has joined the team, showing the Clooney and Krasinski's characters' developing rivalry, and how Zellweger eggs them on. This scene has two takes: one longer featuring Pryce, and one shorter without him.

"Football's Beginning: The Making of Leatherheads" (6 minutes, 18 seconds) is your standard making-of promo documentary, covering the real origins of the story and the inspiration for the 1920s style, told through cast and crew interviews. Likewise, "No Pads, No Fear: Creating the Rowdy Football Scenes (9:15) puts a greater focus on shooting the football material and matching the reality of pro football in the 1920s. It includes on-set footage and a talk with the coach/historian who advised Clooney and the actors. The Visual Effects Sequences (5:33) featurette looks at how these football scenes were enhanced, including building entire stadiums and adding the crowds. The majority of the featurette is a split screen comparing the original footage and the effects-enhanced footage. 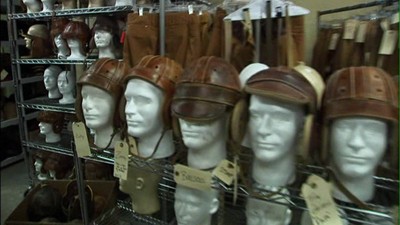 The last little bit is "George Clooney: A Leatherheaded Prankster" (3:30), and it shows the actor/director giving his football team a hard time by putting them through some unnecessary reshoots involving mud and humiliating positions in front of a green screen. Funny stuff.

FINAL THOUGHTS:
Though better for the performances and the shooting style than it is for how it all comes together, Leatherheads is still Recommended. The George Clooney-directed football comedy suffers from some lead-footed tendencies, but its throwback screwball romance has enough inherent zazz to keep it entertaining. Most filmgoers sidestepped the period piece when it was in theatres, but hopefully it will get a second run at the goal now that it's on DVD. A solid handful of extras should make the package a little more enticing, too. Overall, not as bad as you've likely heard, and certainly worth a look just to see George Clooney with lipstick smeared all over his face... 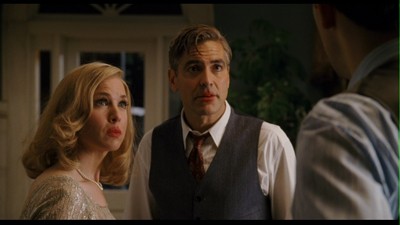