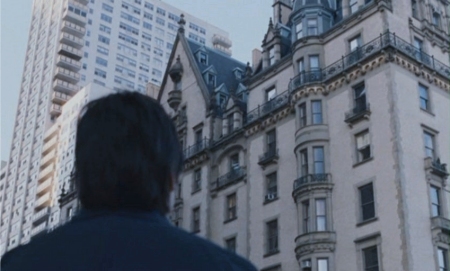 REVIEWER'S NOTE: Portions of this intro have been taken from my recent review of Andrew Piddington's The Killing of John Lennon (2006), which this film obviously shares certain themes with...and will ultimately be compared to.

On December 8th, 1980, Mark David Chapman murdered music legend John Lennon in New York City. In the hours before, Chapman remained outside The Dakota (the building in which Lennon and his wife, Yoko Ono, lived) after receiving an autograph from the ex-Beatle as the pair departed for a recording session. Upon Lennon and Ono's return to The Dakota later that night, Chapman shot the musician and activist four times with a revolver from behind, ending his life in just a matter of minutes. Chapman was a native of Hawaii and traveled to New York specifically to kill Lennon, even though the young man was an admitted fan of his music.

Stranger things have happened in this world, but not by much.

In the last 28 years, Lennon's murder has been studied, mulled over and theorized, but nearly every attempt to decipher Chapman's motive has produced virtually the same result: he did it because he had to. In the young man's possession that evening (and for a great deal of time before the incident) was a copy of J.D. Salinger's novel "The Catcher in the Rye", which Chapman believed mirrored his own life, both in direction and spirit. Some believe he simply did it for the attention, which was an inevitable result of such actions. No matter what the reason, this much is true: fans of Lennon were justifiably upset that such a talented man was murdered for selfish reasons. Chapman is still in prison and has been denied parole multiple times since 2002.

Perhaps this recent flurry of action has renewed public interest in the tragedy---and much to some fans' dismay, J.P. Schaefer's Chapter 27 (2007) marks the second of two recent films that attempt to place viewers inside the mind of Lennon's murderer (the other being The Killing of John Lennon, linked above). Their argument, of course, is that a convicted killer shouldn't receive attention for the death(s) they've caused. They've got a point, especially if the attention leans towards "sensational" instead of "insightful and informative". The Killing of John Lennon, anchored by a solid performance by Jonas Ball as Chapman, managed to favorably overcome its provocative title and deliver a layered portrait...though it certainly wasn't without its fair share of faults.

Jared Leto stands in the foreground of Chapter 27, having gained a great deal of weight to portray the doughy Chapman; in the film's favor, Leto turns in a solid performance that a cover quote likens to Robert DeNiro in Raging Bull. It's a fair enough comparison, at least on the physical side. Leto mentions in an accompanying featurette that he often took a wheelchair to the set, as his body couldn't handle the excessive bulk---so you'd think that such a commitment (from a recognizable actor, no less) would be for a worthy cause, right?

Not so, as Chapter 27 unfolds in a flat and uninvolving manner. The title references Chapman's desire to "continue" Salinger's novel (which ends with Chapter 26) by executing the "phony" John Lennon...but that's really as deep as it goes, though Chapter 27 manages to serve as a decent play-by-play account of the fateful days leading up to December 8th, 1980. Aside from that and Leto's devotion to the role (and a solid supporting performance by Lindsay Lohan as Jude, who waits outside The Dakota as well), there's not much else here. Those with a passable knowledge of the event will find the film dull and formulaic, while those new to the story can learn just as much elsewhere. Aside from the initial shock of "That's the guy from My So-Called Life?", there are painfully few surprises along the way.

The DVD by Genius Products doesn't help matters much, combining a decent enough technical presentation with practically no bonus features of interest. Let's take a closer look, shall we?

Presented in a 1.78:1 aspect ratio and enhanced for widescreen displays, Chapter 27 looks decent with a few notable flaws. The film's desaturated color palette has been preserved nicely, image detail is solid and black levels are generally consistent. Unfortunately, mild amounts of edge enhancement and interlacing can be spotted, bringing down an otherwise strong presentation by a notch.

The Dolby Digital 5.1 mix fares slightly better overall, boasting strong, clear dialogue and occasional uses of the rear channels for atmospheric effect. Unfortunately, no Closed Captions or subtitles have been offered during the main feature or any bonus material. Hardly surprising, but a disappointment nonetheless. 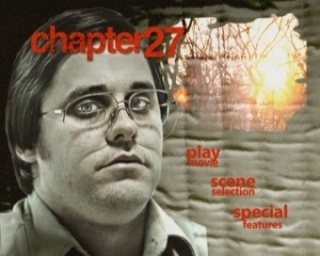 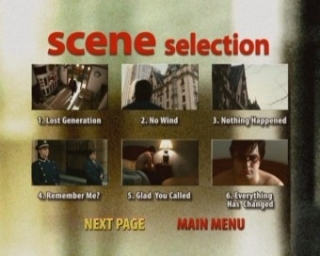 Seen above, the plain-wrap 1.33:1 menu designs are basic and easy to navigate. The 87-minute main feature has been divided into 18 chapters, while no obvious layer change was detected during playback. This one-disc release is housed in a standard black keepcase and includes no inserts of any kind.

Bonus Features
Not much to choose from here, both in quantity and quality. A general behind-the-scenes Featurette (11:04) includes interviews with Leto, Lohan and Shaefer, but their comments stay completely on the surface. Leto is particularly disappointing, especially given his startling transformation during the film's production. It's worth a once-over, but that's about it. Also included is the film's Theatrical Trailer (2:07), though it looks like we're seeing it through a thick fog. The latter is presented in anamorphic widescreen, while the former is slightly stretched and letterboxed. As mentioned above, subtitles and Closed Caption support are not included.
Final Thoughts

Despite a solid lead performance by Jared Leto and a formidable atmosphere based on real events, Chapter 27 never really accomplishes a great deal. It's tough not to draw direct comparisons with 2006's The Killing of John Lennon, which utilized a more urgent, grounded approach to create a fuller portrait of Chapman. Genius Products' DVD presentation is fairly by-the-book, pairing a half-decent technical presentation with a slight assortment of forgettable bonus features. It's certainly worth a once-over for fans of Leto and/or Lohan, but even a low price point doesn't make Chapter 27 worth holding onto. Rent It.