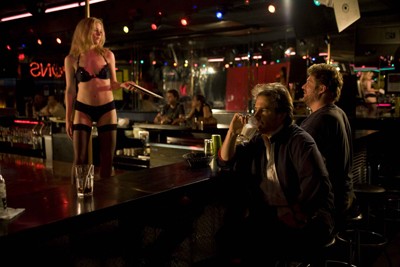 I feel I should admit up front here that I have never read a word of Chuck Palahniuk's fiction, and that way if certain members of the Cult of Chuck want to go ahead and label me a square and take a pass on reading my review of Choke, the newest rancid cinematic mess to be adapted from one of his novels, they can do so. I am likely going to fall into the category of "doesn't get it." I have no idea how much of Palahniuk survived the transition into first-time writer/director Clark Gregg's movie, but if it's intended as a commercial for the novel, count me out. You just lost a sale.

Choke concerns itself with the life of sex-addicted conman Victor Mancini, played with the usual able-bodied charisma and an added dose of shlumpiness by Sam Rockwell (Confessions of a Dangerous Mind). Victor goes to his support group for addiction, but instead of participating in the conventional sense, he has sex in the bathroom with the underage parolee he is supposed to be sponsoring. When not avoiding his issues, he works as a performer at a tourist trap recreating life in Colonial America. In his off hours, Victor visits his ailing mother (Anjelica Huston) at the Catholic hospital where she receives permanent care for her Alzheimer's. She never recognizes her child, instead believing he is one of a litany of lawyers who presumably helped her out over the years and often tells "them" what a disappointment Victor has been.

To pay for his mother's care, Victor goes to restaurants and fakes choking on his food. Then, after a concerned citizen rushes to his aid and saves his bacon, Victor proceeds to bilk their kindness by getting them to invest deeper into his troubled life and giving him money. I suppose it's all for a good cause, but don't presume to think Victor is a nice guy. He'd be the first to tell you he's not. Victor is only keeping his mother alive in the hope that she will finally tell him who his real father is, and that is largely motivated by his hope that the revelation will at last prove he's from far better stock than what he knows, that the other end of the gene pool has a daddy swimming deep in awesomeness while mommy kicks around in the shallow end full of cigarette butts and condom wrappers.

Yes, surprise, Victor has mommy issues. Choke is actually one big mommy issue masquerading as a movie. Isn't it time we stop apologizing for self-centered jerks like Victor and force them to face the fact that they suck all on their own, it's not the fault of the ladies in their life? There are no redeeming women in this movie, only places for Victor to deposit his sperm and his insults. The one supposedly decent woman in sight, Mommy Mancini's doctor (Kelly MacDonald), ends up being a liar who also has self-esteem issues that make her stupid enough to think Victor is worth helping, which I guess is what passes as the Madonna in this little boy's world. And don't even try to argue with me that the men aren't meant to be redeemable, either, because Victor is obviously the hero of this male fantasy where the protagonist's every foul personality trait can be blamed on womankind and the icky emotions it has tried to force on him. 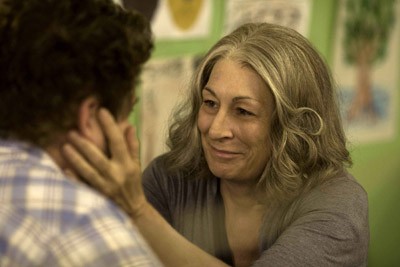 The funny thing is, Choke is meant to be a story of redemption, of Victor finding his way out of the emptiness of his anesthetized existence. In case we miss it, there is even a half-baked left turn in the middle act where Victor becomes convinced that he was actually cloned from Jesus' foreskin. That's right, he's the second coming of Christ's penis, here to save us through his own transformation from average human dick to blessed divine dick. Like Paul in the Bible, as the up-until-then-dimwitted stripper (Gillian Jacobs) informs us. Because, you know, that's comedy right there. The stripper who is really, really stupid and whom we have been making fun of, she actually knows something! I bet you can almost hear the sound of me slapping my knee.

The problem with redemption is there has to be some real emotion in the mix for it to mean anything. Sort of like how to get through his 12-step program, Victor has to actually try to follow the steps. There is, however, nothing genuine in Choke. The director has no sympathy for his characters, not even the one he plays himself. (Clark Gregg is an otherwise fine character actor whom I like very much, but who maybe needs to stay in front of the camera.) The emotional tenor of the movie is set entirely by Victor, and Victor only truly cares for himself, and so any reaching out to others is only meant to help Numero Uno, all the way through to the final scenes. Think of it in terms of the sun. The sun is always bright, but we only really notice it and it only hurts our eyes after we spend 90 minutes in the darkness watching a crap movie. Without both elements working in tandem, though, neither the sun nor the darkness has much effect.

Maybe in the novel Victor has a greater inner life, I don't know. Chuck Palahniuk is reputed to be a wizard with words, and he may create a narrative that guides his readers through Victor's numbness in ways that elevates it above hokum. The author also wrote Fight Club, and David Fincher's adaptation of that managed to make its hollow men and the extreme lengths they will go to in order to feel something have some kind of relevance for his audience (even if the only women in that movie serve in similar "crazy whore" uniforms as the women in this one). Maybe it's that, as a director, Fincher has a command of style that Gregg does not, and like good prose, stylish montage and well-written narration can fill in the cracks and provide a semblance of depth. Choke is advertised as a comedy, and even though it does have a handful of good laughs, those are few and far between. It will most likely score some points for its propensity to shock, but even that element of it seemed boring to me. Shock is like redemption, like that glaring sunlight, in that it can only truly provoke when juxtaposed against something else. The more gonzo elements of Choke are merely banal, like Palahniuk and Gregg put a bunch of supposedly shocking words into a box alongside some other everyday objects and situations. Pull three out at random--anal beads, chocolate pudding, and a hospital bathtub--and build on that. How shockingly predictable!

I honestly don't know how to end this. I acknowledge that in many ways this is a rant as much as it is a movie review. I know I wanted to make mention of how the film is, at its best and at its worse, terrifically dull and that the pacing and direction are plodding, and this was going to be my final, "Ah-ha! You have committed the worst sin of all! You were boring!" All of that seems moot, however, now that I have gone off on everything else I thought was wrong with Choke. Without the misguided subtext, it would be merely a blah movie, not particularly bad but not necessarily good, either. Perhaps its lack of any distinctive style is part and parcel with the shallowness of the script. In both cases, no one took the time to go beyond the obvious and the lazy, to develop anything here so that all of the disparate and unwieldy story elements and all of the intended character arcs actually grew into something of greater value. I imagine Choke's defenders will call it daring, but I don't feel like this movie has dared to be anything at all. Like its main character, it's a scared little boy trying to make us think it's a cunning, dangerous man, and all I can say is, lose the act, son, you're not fooling anybody.