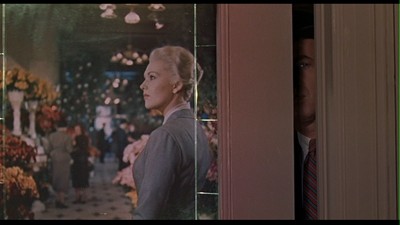 Most of Alfred Hitchcock's movies feature someone suffering from some kind of psychosis, most often manifesting in some form of obsession. Be it Rebecca's subplot about the maid's fixation on her master or Norman Bates' mother complex in Psycho, the engine of the plot comes down to someone being unable to let go of a moment in his or her past, either romantic or familial or occasionally both. Hitchcock's 1958 masterpiece Vertigo, currently being re-released as a double-disc Special Edition as part of Universal's Legacy Series, is cut from similar cloth but is notably different for the fact that this time around, it's Hitchcock's hero who has the disorder and not the villain.

James Stewart plays Det. John Ferguson, known as Scottie to his friends. Scottie is a celebrated member of the San Francisco Police Department until a sudden case of acrophobia--or a pronounced fear of heights--leaves him unable to save a fellow officer in peril. Rather than ride a desk until this condition passes (if it ever does), Scottie quietly retires, determined to lick the problem all on his own. What he doesn't figure for is the reemergence of Gavin Elster (Tom Helmore), a college chum with a private matter he feels Scottie can help with. Elster believes his wife, Madeleine (an alluring Kim Novak), has been possessed by the spirit of an ancestor whose tragic life was cut short by suicide. Fearing that Madeleine will go the same route, he puts Scottie on her tail. After rescuing the woman from drowning, Scottie and Madeleine fall in love.

Naturally, things end up getting way more complicated. Scottie's attempts to help do more harm than good, and his own mental condition gets in the way of helping Madeleine solve hers. It's here where Vertigo takes a real turn into the strange. What other detective story can you think of where the hero suffers a nervous breakdown and is committed to a hospital? Upon his release, Scottie meets Judy (Novak again), a dead ringer for Madeleine, and he becomes obsessed with her, going so far as to try to make her over to match his lost love in every way. 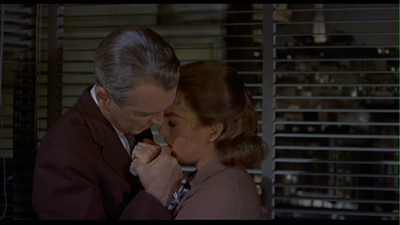 Hitchcock has dealt with men chasing a dead past before. Again, in Rebecca, where Laurence Olivier's character is always brooding over what he has lost; also, in Spellbound, and Gregory Peck's mysterious dream holding the key to a lost past. There is, however, a more feverish tone to Scottie's actions, almost as if he is on a mission. It gets to the point where the viewer even begins to fear that he will turn violent himself, recreating even the gory details of his history with Madeleine. This is aided by the way Hitchcock photographs his phobia, including the trademark "contra-zoom," where the camera simultaneously zooms out and pushes in, invented for Vertigo by the second-unit cameraman Irmin Roberts. Hitchcock also constantly reminds us of the double lives through the use of double imagery, of echoes and images in reflection. The overall effect is cumulative, compounding on the audience as much as it does on Scottie.

Perhaps best remembered, though, is the psychedelic dream sequence designed by John Ferren. Scottie's nightmare forces him to relive the tragedy of Madeleine, but refracted through his acrophobia. Like the Dali dream sequence in Spellbound, this short lapse into the surreal gives the protagonist all of the clues he needs to solve the mystery, but cracking the code may require some additional madness. 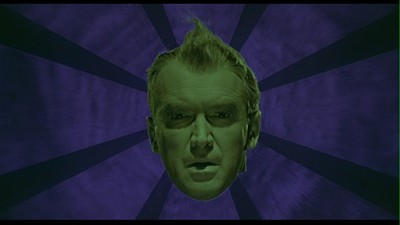 Even at a running length that extends a smidgen over two hours, Vertigo is a taut piece of cinema. In a film full of illusions, perhaps the greatest illusion of all is how Hitchcock convinces us that a lot more is going on than actually is. There are very long dialogue sequences in this movie where characters sift through what is happening. In an early scene with Scottie and his old flame, Midge (Barbara Bel Geddes), a subplot that mirrors the greater plot but in much lighter tones, Hitchcock dispenses with a fair amount of exposition but disguises it as friendly banter. These scenes also contrast nicely with the more thrilling sequences. The picture actually opens with a bang. Following the legendary Saul Bass title sequence, Hitchcock takes us right into an exciting rooftop chase, with Scottie and another cop pursuing a crook across the San Francisco skyline. It looks like a scene out of a modern superhero movie and is also one of many times where Hitchcock uses real San Francisco landmarks to enhance the reality of his film (and thus distracting us from the implausibility of it all). It's one of the master's most gorgeous films, helped along by production design from Henry Bumstead and costume designs by Edith Head.

All in all, Vertigo is a consistently rewarding cinematic experience, and one that only gets more fulfilling with time and multiple viewings. I first saw it before I had even hit puberty, and I don't think I really understood it at that age. Its themes are more adult and opaque than, say, the more visceral up-front plots of Shadow of a Doubt or even Psycho--both films are more than what they appear on the surface, but easier to enjoy as just surface, as well. Vertigo is a dark and tragic movie with a complicated morality. The final scenes of the movie might be redemptive for Scottie, who finally tears the gauze of illusion and deceit from his eyes, but our sympathy is also tugged toward Judy. The cost of Scottie's clarity is too high. Thus, unlike a conventional thriller where we find satisfaction in a heroic end, Vertigo exits on a note of confusion. There are no easy answers, the truth is possibly a lie, and wrongs aren't righted, the patterns will persist. 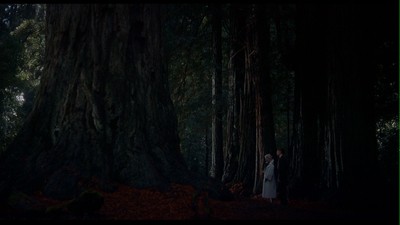 Video:
The Vertigo: Special Edition (Universal Legacy Series) is at least the third time the movie has been released on DVD in North America. The copy I own was put out in 2001 as part of Universal's Alfred Hitchcock Collection library, and then a few years later, in 2005, Vertigo was released again as part of the Masterpiece Collection. It's hard to say what these different Collection and Series titles really mean, but having had a chance to compare the Special Edition with the non-anamorphic 2001 disc, I can say that this new edition of Vertigo is definitely superior. It may, however, be the same as the 2005 disc, which DVD Savant reviewed at length. He includes quite a bit of information about the restoration of Vertigo and there is nothing here that makes me think this new 1.85:1 anamorphic disc is any different in quality. Still, since the Masterpiece Collection was only available as a boxed set with Vertigo being only one of two improved discs, many of us have not double-dipped. So, I will illustrate the changes with screengrabs below. 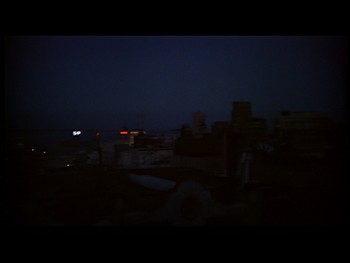 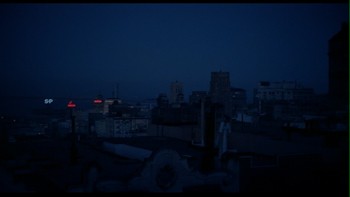 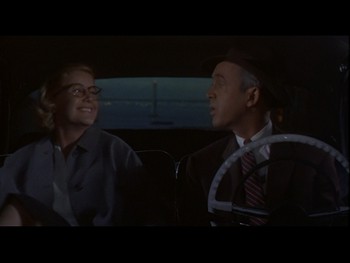 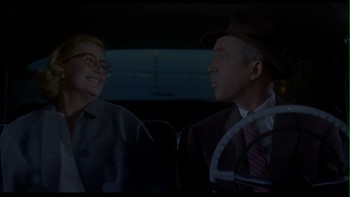 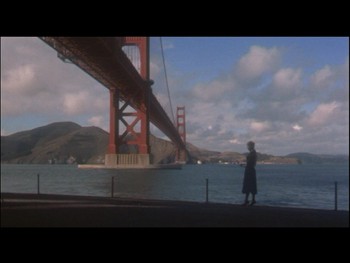 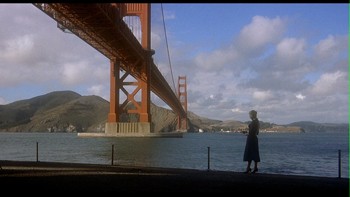 The new transfer for the Vertigo: Special Edition (Universal Legacy Series) is flawless, with beautiful colors and a sharp picture quality throughout. There is no doubt in my mind that this is the way to go in terms of this movie, and if you've waited seven years for a better quality, at-long-last anamorphic release, you should double-dip without fear. A fairly reasonable retail price also means you won't get dizzy from sticker shock when you take the DVD to the cash register.

Sound:
In addition to the reconstructed English 5.1 audio, the 2005 DVD restored the original mono mix to a 2.0 track; this is repeated here, as well. Again, Savant points out that there were major problems in the source material and details some of the alleged discrepancies in the fix-up. I didn't find the 5.1 mix to be overly ostentatious, and though there are some front and back speaker effects, they don't overstate the case or call enough attention to take one out of the experience.

The subtitle options are French, Spanish, and English for the Deaf and Hearing Impaired. These subtitles are also available on DVD 2. 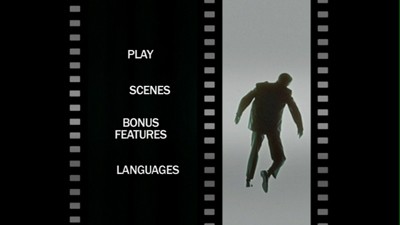 Thankfully, pretty much all of the original extras from the 2001 edition of Vertigo are carried over here. (I don't believe there were any additional bonuses added in 2005.) This includes:
* The restoration audio commentary featuring associate producer Herbert Coleman and the restoration team.
* A production notes text file.
* "Obsessed with Vertigo: New Life for Hitchcock's Masterpiece": The original DVD documentary on the restoration and legacy of the film. The half-hour program was produced in conjunction with the American Movie Classics cable channel, presumably when it still showed actual classics. (This is on DVD 2.)

In addition to the returning features, DVD 1 has several other extras, including the original and restoration theatrical trailers and "The Vertigo Archives", an extensive gallery of production drawings, storyboards, on-set and publicity photos, lobby cards, and posters from different countries and different eras.

The Foreign Censorship Ending gives us a peek at a "crime doesn't pay" coda that Hitchcock was forced to tack on to international prints of the movie.

Finally, there is a new audio commentary by William Friedkin (The Exorcist, Bug). It's a solid track, with Friedkin sharing some history and his thoughts on the movie. Some of it can be a little redundant in that he often just describes exactly what we are seeing onscreen, but overall, he is an engaging speaker and an interesting guy to listen to talking about movies. 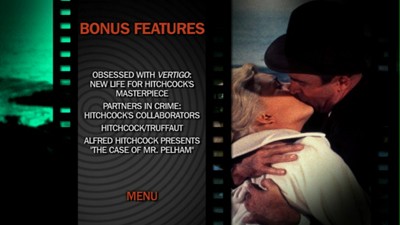 After the documentary featurette from 2001, DVD 2 has a few more new extras to spruce up the Vertigo: Special Edition (Universal Legacy Series) package. The first is "Partners In Crime: Hitchcock's Collaborators". This 55-minute section is broken up into four parts, focusing individually on Saul Bass, Edith Head, composer Bernard Hermann, and Hitchcock's wife and inspiration, Alma Reville. In addition to historical footage, including clips from other films, there are also interviews with contemporary professionals working in the same field as each subject, critics and scholars, and luminaries like Martin Scorsese, Guillermo del Toro, John Carpenter, and Hitchcock's daughter, Patricia, and granddaughter, Mary. The Alma segment also offers some photos and footage from the couple's earliest years together.

Pertinent audio excerpts from the famous discussion between Alfred Hitchcock and Francois Truffaut run 14 minutes in total and cover the making of Vertigo. They play over a montage of scenes from the movie to illustrate what is being said.

The final extra is an episode of Alfred Hitchcock Presents, "The Case of Mr. Pelham." One of the installments of the half-hour period of the show (just over 25 minutes without commercials, it aired in 1955), "Pelham" was presumably chosen for Vertigo since the main character (played by Tom Ewell) is suffering from a mental malady involving memory and double identities. The episode is also one directed by Hitchcock himself.

FINAL THOUGHTS:
DVD Talk Collector Series. If any film director deserves the high-class DVD treatment, it's Alfred Hitchcock, and the Vertigo: Special Edition (Universal Legacy Series) finally gives one of his most beloved classics the sprucing up its long required. A film about obsession, identity, and the mental tricks we play on each other and on ourselves, Vertigo is a thrilling, challenging drama. James Stewart is amazing, Kim Novak is beautiful, and Hitchcock really makes San Francisco come alive. With a gorgeous image transfer and two discs of extras, the Vertigo: Special Edition (Universal Legacy Series) is the best of the best and worth ditching all older editions of the film to make room for. 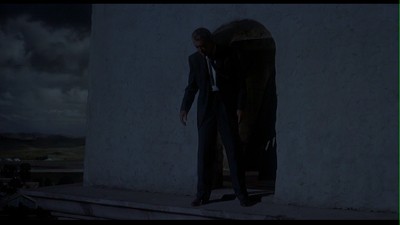