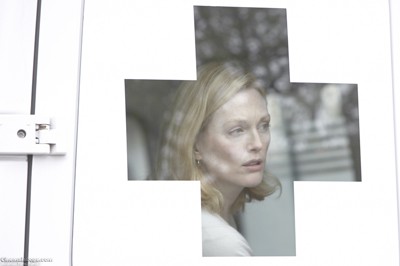 Some movies start off shaky and get better as they go. Some you are unsure about at first but like more the longer they sit with you. Blindness fits into both of these categories, and though the movie never quite lives up to the level of quality the material demands, it does have a fair amount to recommend it.

The high-concept slug for Blindness is that one day, without warning and without apparent cause, people start losing their sight. As the first victim, a Japanese man (Yusuke Iseya), describes it, it's not like the accepted norm for blindness, the absence of something and a curtain of black. Intsead, it's too much of everything, like all the lights have been switched on at once, creating an expanse of white where the world used to be. He says it's "like swimming in milk."

With the Japanese man being patient zero, the infection spreads, first to all of the people that were at the optometrist's office he visited, and then across the city and presumably the world. The eye doctor (Mark Ruffalo) is one of the first to be tossed into government quarantine, and his wife (Julianne Moore) goes with him, pretending to have gone blind, as well, so as not to leave him alone. Since the first arrivals are all people the doctor knows, including a prostitute (Alice Braga) and a little boy (Mitchell Nye) he's been treating, the doctor tries to keep a semblance of order amongst the group. As their numbers grow, overcrowding the facility, and it becomes more clear that no one is going to help the banished beyond the meager rations of food the army drops off each day, this miniature society breaks down. The quarantine building is separated into three different wards, and the third ward, led by a self-proclaimed King (Gael Garcia Bernal), decide to start bullying the other victims. Their demands grow worse and worse, taking everyone to the limits of their morality. The doctor's wife, in particular, is challenged to maintain her sense of self. As the only one who can see the filth and the atrocities--a secret the couple are very careful to keep--she must eventually do something to force the hands of the others.

Blindness is directed by Brazilian filmmaker Fernando Meirelles and written by Don McKellar (Dance Me Outside, 32 Short Films About Glen Gould), who is also an actor and appears in the movie as "the thief." It's based on a novel by José Saramago, and you can see the filmmakers struggling with the literary dimensions of the story. As with a lot of adaptations of challenging books, transferring a metaphorical state from the printed page to the silver screen proves difficult. Visually, Meirelles does an impressive job, shooting his actors with a stark, blown-out lighting style and using fields of solid black and solid white to simulate what they are experiencing. He also uses various compositional tricks to challenge our own perceptions and make us question how we are seeing things. Reflected images multiply figures, close spaces, and cause us to think we are seeing what we are not, keeping the audience on its toes. If the characters can't trust their eyes, neither can we. 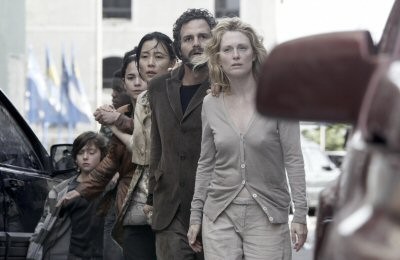 Unfortunately, though these transitional elements are visually dazzling, the scenes they link are often labored and slow. Dare I call them snooty? It's as if McKellar and the director have tried to take the inherent melodrama out of the situation so they won't be accused of creating a run-of-the-mill post-apocalyptic story. This is most evident in the beginning of the movie and the excruciatingly long set-up. The filmmakers want us to have a sense of detachment from these characters, to see them as nameless types rather than individuals, presumably so that when their humanity is broken down by the crisis they find themselves in, it will strengthen the movie's case that this could happen to anyone. This choice, however, has the adverse effect of keeping the viewer so distanced, it's hard to invest oneself too deeply into what is happening. Only Julianne Moore manages to keep us hanging on, her position as the last seeing person making her a stand-in for the filmgoer. I felt sorry for her, and that sympathy gave me the thread to stick it out until Blindness started getting good.

That happens about halfway through. When Bernal decides to take over the hospital, it looks like the movie is about to get cheesy, but as it turns out, having the bad guys show up actually gets things moving. The demands these thugs make of the others raises moral questions, forcing the characters to question not just what lengths they will go to in order to survive, but what they will ask of others when it benefits them. How does one define dignity? Is their a difference between male and female pride, and are they dependent on one another? Is it better to be humiliated than resort to violence? Once again, Moore leads the charge here, but Ruffalo also serves well as her pathetic foil, over-thinking everything and not doing nearly enough. Some of what they go through is extremely disturbing to watch, and yet there are also moments of real beauty, as well.

Once these plot points and philosophical quandaries are dealt with, it makes way for the final stages of the film, when the early group from the doctor's office forms a loose family and begin to rediscover themselves. Meirelles and McKellar need not have worried that their lofty intentions would be misinterpreted, as everything is there in the last act. With the doctor and his wife and his patients heading for a brand new day, it's clear that Blindness is meant to be an allegory about the strength of the human spirit, that even after we've suffered through our worst, we can rebuild and return to being our best. In the final shots of the film, when Julianne Moore looks at the vast expanse of the sky, she finally sees what the blind people have been seeing (or, as it were, not seeing), and she also sees what this new perspective has bought them. It takes a long time to get there, and there are plenty of stumbles along the way, but in those moments, Blindness works.

The question remains, though, is the journey worth it? Probably not entirely. I definitely have enjoyed writing about it more than I did watching it. You will need a taste for slower pacing and ambiguity, and you will have to forgive the huge lags in time where nothing happens, but if you have at least a passing interest, Blindness is an ambitious piece of art and at least worth a look-see.