Houdini The Man From Beyond

Harry Houdini was a very good magician and escape artist.  What set him apart from other magicians of his day, and the reason that just about everyone reading this knows his name, was his genius for self-promotion.  There have been several people more talented and creative in performing magic, but no one comes close to Houdini's ability to capture the interest of the public and turn that interest into paying customers.  By the middle of the 1910's it was easy to see that movies, whether they were a flash in the pan or not, were making a lot of money, and Houdini saw film as a win-win situation.  Not only could he make money by appearing in movies, but it would increase his exposure and he could use them to promote his stage act.  SO in 1919 Houdini made his first foray into movies with The Master Mystery, a 15-chapter serial.  That did well, and though there were behind the scenes problems with the way the film was distributed, Houdini had started his movie career.

In 1920 he made Terror Island, a South Seas adventure picture, which didn't do so well.  In 1922 he formed an independent company to produce his next movie, The Man From Beyond.  First released on DVD by Kino as part of their excellent Houdini the Movie Star boxed set, a small publisher, the Restored Serials Super Restoration Company, has recently put this film out on a scratch-resistant DVD-R.  This new release has a better image with greater detail and some nice bonus items.  It's unfortunate that this film, based on a story by Houdini who was fascinated by the occult by this time, is a mess and plays poorly today. 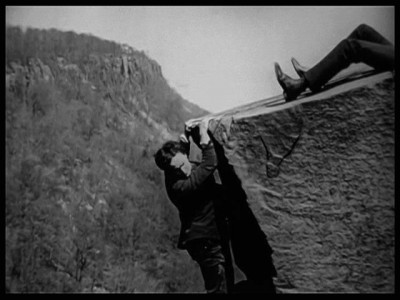 A scientific expedition to the Arctic discovers a ship that has been frozen in the ice for 100 years.  On board is a man frozen solid in a block of ice.  When thawed, he comes back to life and introduces himself as Howard Hillary (Harry Houdini).  Hillary was knocked out by an evil ship's captain as the rest of the crew, including Hillary's love, Felice, abandoned the ship.  The scientists take Hillary back to civilization, and there he meets the daughter of a missing scientist, also named Felice (Jane Connelly) who is identical to Hillary's lost love of 100 years ago.

A wicked man has kidnapped Felice's father and is holding him hostage.  He plans on marrying the young girl to gain control of the father's fortune.  Hillary is sure that this new Felice is the reincarnation of his old love, and that their souls are joined.  Not only does he have to stop Felice from getting married, but he has to convince her of who she was in a previous life. 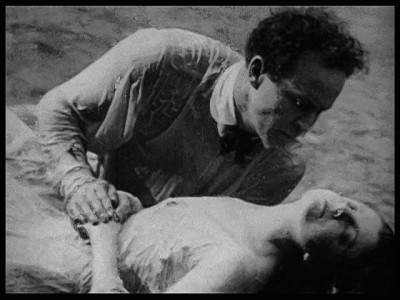 When seen today, this film isn't stellar.  There's very little action, the thing that people go to a Houdini movie for, and only one escape trick.  Unfortunately even that is set up poorly.  Houdini's trapped in a straight jacket in a padded cell in a mental hospital, and when the door is opened some time later he has gone.  It's not until 10 minutes later that they show the actual escape, and by that time no one really cares.

The film also spouts a lot of metaphysical claptrap about reincarnation, which apparently both Moses and Jesus Christ preached (at least according to a title card.)  The bits about immortal souls searching for their "heart's desire" really drag the movie to a halt.  It's hard not to roll your eyes at the naïve way this aspect is shoe-horned into the plot.  Houdini was trying to make believers out of his audience instead of trying to tell an entertaining story.

This movie comes on a DVD-R, but one that has been coated to protect it from typical wear and tear.  While I haven't had much experience with the TDK Armor discs, it's a great idea which eliminates the main complaint I have about DVD-Rs, namely that they are easily scratched.

This edition of the film runs 80 minutes, which is significantly longer than the 68 minutes that the Kino release runs.  Watching the film I couldn't catch any new scenes of sequences, which probably just shows that I have a lousy memory.  So I synched up the two versions and played them side by side for a while in several spots.  I did notice additional footage, mainly quick reaction shots or starting a scene a bit earlier.  In addition the title cards are generally on the screen for much longer than in the Kino release.  When all was said and done, I didn't find either edit of the film to be significantly better over the other.

The credits for the soundtrack only list "SonicFire Pro" a computer program for composing music.  No one is credited with the score.  It is clear that the music was generated by a synthesizer rather than a live band, and I've never enjoyed electronic music when it accompanies silent scores.  It just takes me out of the time when the film was made.  For this score it was obvious that a lot of time was spent trying to match the action on screen with the music, but it didn't work as well as it could have.  They used eerie music too often and I often caught myself thinking about the score, which isn't really a good sign.  The best silent film scores seem invisible, and it's only after you find yourself humming a prominent theme after the movie that you realize it was great music.  This score doesn't accomplish that.  That's not to say it's a horrible score, it isn't.  I've certainly heard worse, it just doesn't match Jon C. Mirsalis' score on the Kino set.

The full frame black and white image looks pretty good over all.  This version of the film has a bit more detail than the Kino version and is generally sharper and clearer.  There are significantly fewer spots and marks which helps the appearance of the film.   While this film is not tinted like the Kino release, it does look better.  There are some areas where the image is rather soft, but these are the exception rather than the rule.  There has been some edge enhancement applied to the image too, which is too bad.  It's not heavy, but it is noticeable in some scenes.  If you have the Kino version I wouldn't say the video improvement was worth a double dip, but this is the nicest copy around.

This disc also includes an example of Houdini's famous straight jacket escape.  In front of a large crowd he's put into the jacket, hoisted several stories above the ground, and easily escapes.  The whole clip runs a little over 2 ½ minutes and ends with a nice close up of Houdini himself.

There's also a wealth of information of the disc in .pdf format that can be read by any computer with a DVD-Rom drive.  First off is a great 20-page promotional booklet given to theater owners to promote the film.  It has information about the movie, examples of 1, 3, 6, and 24-sheet posters that are available, and the original cue-sheet for the film.  This was quite fun to look at.

Next up is a staggering 289 pages of script from The Master of Mystery, the Houdini serial that he made in 1919.  Finally there is a chapter-by-chapter synopsis of the 15 chapter serial, complete with hand-written notations.  All in all this is a great collection of material that hard-core Houdini fans will be delighted to see.

While this isn't Houdini's best movie, it is an interesting historical document and worth watching.  This new edition from the awkwardly named Restored Serials Super Restoration Company looks very good, better than I was expecting from a new publisher.  Hopefully they'll continue to release quality films with the impressive bonus material that this disc boasts.  Recommended.