Sunshine Superman: The Journey of Donovan 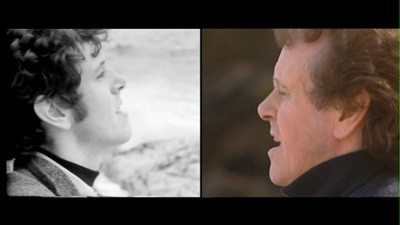 Back before individual song downloads began threatening to make music albums obsolete as complete packages, the previous emergent technology, the compact disc, changed what albums could be by expanding them. With CDs, one record could now hold 75 minutes of music, and bands started packing each and every second with sound. This was not always to the benefit of the material, and many albums were too long, too overblown, because none of the fat had to be trimmed.

I'm starting to feel that we have entered into the equivalent era for music documentaries. DVDs mean that documentaries can bypass traditional methods of distribution and broadcast, and so a program need no longer fit into the prefigured time slot of a television show or the preferred length of theatrical exhibition. Do you have miles and miles of footage to choose from? Why choose at all, when every inch can fit on a DVD! The latest example is Sunshine Superman: The Journey of Donovan, a three-hour documentary about the '60s troubadour directed by Hannes Rossacher. It's a long, long, long journey--a motion picture to nowhere, if you will--and once you get there, if you aren't completely wiped out, let's not forget that DVDs come with extras. In this case, a second DVD with two hours and fifteen minutes more of material. Boy, oh boy, you'd better looooove Donovan!

Which isn't to say I completely disliked Sunshine Superman, I just wish it had been more digestible, more professionally fine tuned, more judiciously edited. There are really two movies here, the Donovan story pre-1970 and the Donovan story after, and though for most people's money the compact years of fame and hysteria from '65 to '70 is the primo Donovan time, both halves are treated with the same importance. They are also told with the exact same documentary style, which has a few frills but is short on variation. The spine of the film is a couple of extended conversations with Donovan, the singer sitting in a room and talking to the camera or traveling to the important locations of his past (San Francisco, various parts of London, Joshua Tree, the French Riviera, etc.) For 90% of the movie, it's Donovan and Donovan only, and it's a lot to watch of one person. There is a sprinkling of other commentators, but not counting the brief poetry reading from the singer's father early on, none of these people come in until forty minutes of the movie have already passed, and even then they only appear for one scene. Only Donovan's longtime wife, Linda Lawrence, gets any substantial screen time, with his friend Gipsy Dan and his current producer, Garry Cobain from Future Sound of London, later getting a tad bit more than the single clips of musical arranger John Cameron or the archive footage of George Harrison and Ringo Starr. 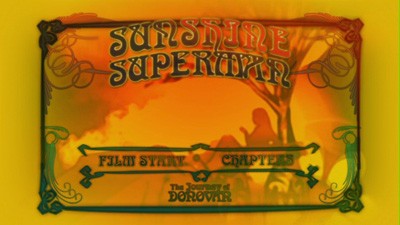 Thankfully, Rossacher is far more liberal with his use of the music, and Donovan's songs provide a constant soundtrack to the talking. The director mixes up old performances with contemporary ones, splicing them into the singer's monologue, providing a kind of anchor so that we understand what Donovan is referring to. A couple of times the soundtrack sounded as if the live performances were either overdubbed with studio recordings or enhanced until they sounded like it, but it's a minor complaint. One thing you will leave Sunshine Superman with is a feeling that you get what Donovan is about musically.

The 1960s were heady times for British musicians, and Donovan was no different. A lot happened to him after debuting on the TV show "Ready! Steady! Go!" in 1965, and as with most rock tales of the period, the creative process is full of discovery and adventure. These guys had no handbook for the kind of success that was coming their way, it was all new territory, and the musical landscape was being traversed by leaps and bounds with each new record. Donovan toured America, rubbed elbows with Bob Dylan and Pete Seeger, visited India with the Beatles, and even hired a pre-Robert Plant version of Led Zeppelin as session musicians. Some interjections, such as a visit to Donovan's guitar maker, tend to meander, but the overwhelming story of what was going on always pulls us back.

That is until Donovan, one of the most popular solo artists of the period, decided to drop out, and in 1971, he and Linda, the love of his life, moved to Joshua Tree, California. It could be because Donovan was less active as an artist starting around there, and his music became increasingly less interesting, but as soon as the young man starts to relax and ease into his 30s, Sunshine Superman slows to a crawl. A series of false-start revivals in the 1980s and '90s do little to help add some pep back into the proceedings, and Donovan's detailed theories on the origins of music and the link to spirituality are quite tedious. By his 59th birthday party and the celebratory 2007 concert that close out the documentary, which feel like the hopeful end of an episode of "Behind the Music" meant to advertise a revival tour rather than a real ending, any of that early magic is all but gone.

So, my advice is to put the brakes on Sunshine Superman somewhere around chapter 37, after Joshua Tree and Donovan's involvement with movies, and either leave the movie for good or return to it sometime later when you've rejuvenated your eyeballs and your spirits and see if it goes better after a shower and a nap (and maybe a beverage or two). Flying high in the '60s was great, but the comedown is brutal. 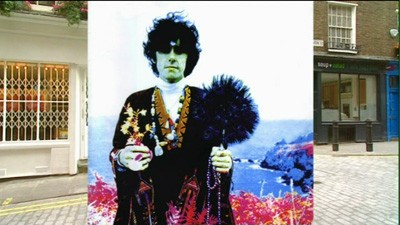 Video:
Sunshine Superman looks like it was mainly shot on video, and the 16:9 transfer reflects that. The vintage clips from TV programs and home movies are actually integrated quite well into the modern footage, and in some cases, look better than the video material. There is a more organic appeal to the older clips that make the new interviews look a little lifeless and even overly rendered, particularly as they suffer from some light edge enhancement. Not bad for what it is, but know what you're getting.

Sound:
The documentary is mixed in Dolby Digital 2.0, and the audio track sounds really good. The music in particular is fresh and clear and can withstand being played at a loud volume.

There are no subtitles or Closed Captioning options.

Extras:
The two-disc set of Sunshine Superman: The Journey of Donovan comes in a standard-sized plastic keepcase with one tray inside each cover to hold the DVDs--or at least I suspect it does. My copy is a promo version and does not entirely reflect the final packaging. 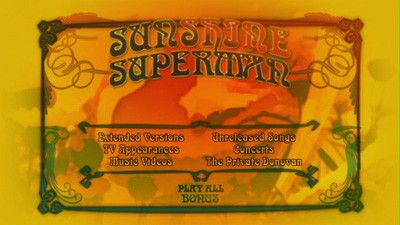 DVD 1 has no extras at all, but the second disc is nothing but supplemental features--135 minutes worth! The first section is made up of extended scenes from the movie itself, and unfortunately are almost completely from my least favorite parts of the movie. Thus, you get more with Donovan's guitar maker and more about Joshua Tree, including the Cosmic Wheels period and a longer talk about Gram Parsons. There are seven scenes in all here. Four are uncut performances, with the most different clip being additional footage from the interview with John Cameron, who did arrangements for the Sunshine Superman album. These run around 27 minutes in total.

TV Appearances collects three performances we saw bits of in the documentary, two vintage runthroughs of "Catch the Wind" and "Sunny Goodge Street" on British and Swedish TV, respectively, and the 1996 performance of "Give it All Up" from the Rick Rubin-produced comeback album, recorded for the Jools Holland show in England. (Both the movie and the box art miscredit him as "Jules.")

Music Videos brings together seven promo films from Donovan, including the more recent "Columbus Stockade Blues," taken from a tribute album for folk banjo player and Donovan mentor Derroll Adams. In this endeavor, Donovan was joined by Hans Theessink and Arlo Guthrie. The other tracks are: "Sunshine Superman," "Wear Your Love Like Heaven," "Hurdy Gurdy Man," "In an Old-Fashioned Picture Book," "Yellow Star," and the early '70s tune "Cosmic Wheels." Excerpts from these are all featured in Sunshine Superman proper.

Four unreleased songs give viewers a taste of more recent Donovan. "Refugee of Love" and "The Olive Tree" are live acoustic recordings for the movie, while "I Don't Know (Short Version)" features a prerecorded track and "Refugee of Love (Studio Version)" shows Donovan laying down his vocals in guitar. (It's hard to tell if the latter is live or lypsyncing.)

Three different concerts are showcased on seven more songs. The first two, "Jennifer Jupiter" and "Mellow Yellow," were taped by the BBC in the '60s, while four more--"There is a Mountain," "Sunshine Superman," "Colours," and "Jennifer Juniper"--were recorded at the 2007 Kodak Theater concert touched on briefly at the end of Sunshine Superman. The final selection is an extended "superjam" of "Season of the Witch" recorded at the Cutting Room in New York this year. This particular version crests 14 minutes and covers various musical styles but struck me as pretty lackluster.

Finally, there is a section called The Private Donovan. This is comprised of short bits about various aspects of the singer's personal life, covering the following:
* "Sapphographs (Song: Be Mine)" (3:25): A look at a photo exhibit by Donovan, featuring musical accompaniment.
* "Don's Basement" (8:15): Donovan shows us various objects and mementoes in his archives and explains where they came from and their significance in his life.
* "Donovan's Father Reads Poems" (4:10): A brief glimpse at the recording session for Donald Leitch poetry reading for the movie, along with a little more from the performance.
* "Maharishi Award" (1:43): Donovan and Linda Lawrence receiving an honor for their work in spiritual studies.
* "Doctor of Letters" (4:00): Donovan receiving his honorary degree for his endeavors from the University of Hertfordshire.
* "Donovan University and David Lynch" (4:00): The singer and the avant-garde filmmaker announce the formation of the Invincible Donovan University for Consciousness Based Education and the Arts in Scotland. Yes, I know it sounds surreal or even made up, but it's true.
* "Donovan's Family Album" (3:50): A slideshow of photos of Donovan and his family, from childhood until now.

Each section has the option of playing the individual selections piece by piece or all at once. The main menu also has the option to play the entire second disc front to back.

FINAL THOUGHTS:
Are we there yet? Sunshine Superman: The Journey of Donovan is a long trip, one that starts off pretty good but eventually makes you yearn for a shortcut. Clocking in at an overwhelming 180 minutes, the documentary about the '60s singer is strong when it's dealing with the height of his fame, but too much equality is given to the later years, when Donovan's power waned and his focus was less on musical discovery and more on self-examination. Rent It for the first half, and sample some of the many musical performances in the extensive bonus section on the package's second disc, but the whole shebang is probably for the most devoted Donovanheads only. 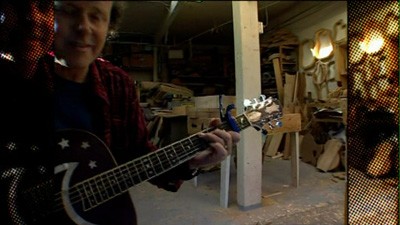