No Offense: Live from New Jersey 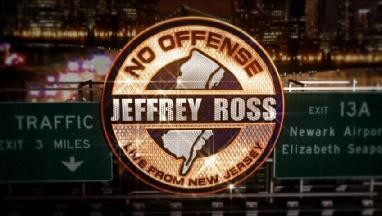 Jeffrey Ross was an unknown to me until I started to catch him on the Comedy Central Roast from time to time. Hot on his success from letting famous people have it as if he were the verbal assassin to the stars, Ross gets his first Comedy Central stand-up performance, No Offense: Live from New Jersey. The Roastmaster General has performed all over the world, but never in his hometown. Now that he has the experience on stage, and has a pretty large buzz surrounding him, he felt it was time to stand tall and proud in front of the community he grew up with. His success has been based on a few minutes of laying into people on television so far, so would he be able to entertain for an entire hour without sounding like a rambling idiot? I wasn't sure what to expect, but this guy really knows how to get some laughs.

Ross gives the audience a little bit of everything in his performance, and he does it without having to resort to fart jokes. He picks out members from the audience to ridicule. It could be about their looks, their style, their job, whatever he can come up with. One poor unfortunate soul in the front row decided to show up to one of the nicest casino's in New Jersey wearing flip-flops. Another audience member looked like he was wearing the same shirt he would have owned in the fifth grade. There's certainly no bias in who Ross criticizes either, as Dee Snyder from Twisted Sister was in the audience, and got a taste of the Roastmaster General's burn : 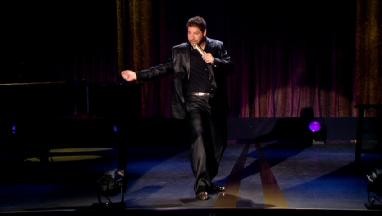 Of course, an hour of seeing the same sort of material we've already seen from Jeff would have been a disappointment, so he sets out to tackle numerous topics, from politics, sex, and family, in the true form of a comedian that's been around the block numerous times before. He even discusses his thoughts of some the latest cinematic hits we would review here on DVDTalk. He should probably start reading some of our reviews though, because he thought There Will Be Blood was about Hanna Montana losing her virginity!

To keep the show at a fast and entertaining pace, he brings up audience members that are familiar with a piano, so they can accompany his tone as he tells hilarious poems he's written. This could have been disastrous if he got volunteers that were stiff and only knew how to play a few chords, but the people that came up to play along with Ross were veterans of the instrument, and even did a little improv themselves! 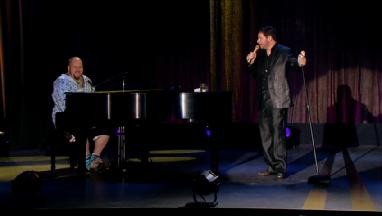 The only nitpick I have after watching Ross perform, is that he's not to the point in his career where he can go from one subject to another in his dialogue smoothly. More often than not, he'll pick on somebody else from the audience to throw a couple of zingers at them, and then move on. I was laughing so hard most of the time however, I couldn't have cared about this minor issue any less.

If you're a fan of stand-up, and you've seen Ross on Comedy Central's roast-a-thons, I know you could have been on the fence on actually taking the time to check out his full length act. If you thought he was hilarious in the quick snippets we've seen on television, then there's no reason for you to shy away from this performance.

This is presented in a 16:9 aspect ratio, and looks very nice overall. The black levels are fantastic and don't ever appear to be washed out, and they never have any issues with macro-blocking. The contrast is very nice, as the picture never appears to acquire a dim look about it, and that's impressive considering how dark the backstage can look, and Ross dressed head to toe in black. There's not a lot of color to speak of, but the skins tones we see are natural and don't have a 'sunburn-esque' quality to them. The image isn't very sharp, but I wouldn't exactly say it's soft either. Perhaps I've just been spoiled by high definition content, but at least they didn't try to throw any ugly edge enhancement into the mix. There's hardly ever any grain to be found. The only issue I had with this transfer, and a minor one at that, is that once in a while, right before the camera is about to switch to another, you can see some interlacing. This is never an issue that's big enough to distract from the performance though. All in all, this is a very nice looking transfer that I found to be more than satisfying for a stand-up act.

The audio is presented in Dolby 2.0, and although it's disheartening that we couldn't get a surround track to make us feel like we were in the audience, it's quite adequate. All the audio is front heavy anyway, so we're not really missing out on much. It sounds crisp, clear, and there are no issues to speak of with hissing or clipping. There's not much of a reason for there to be surround, since there's only music at the beginning and end of the performance. The bass during the musical entrance and farewell sounds pretty full, too. For a stereo track, it provides an adequate experience, but could have gone out there to complement the nice anamorphic image with some nice surriound. 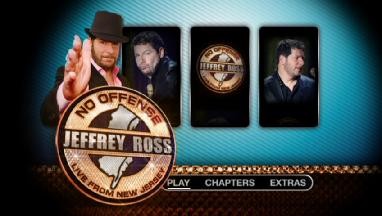 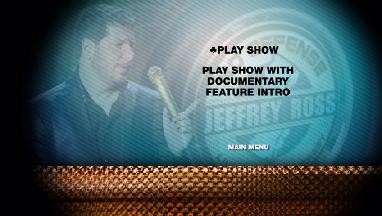 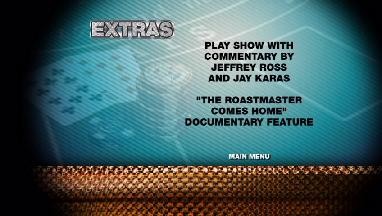 Play Show with Commentary By Jeffrey Ross and Jay Karas - Although Ross says he's not much different off stage than on, he's definitely not as 'in your face' as he is during a performance. That's to be expected, considering it's a performance he's giving, not an hour of casual chat. It's an interesting listen at times, as we learn how Ross feels during his performance on stage, and we're told about how this was filmed to be like a stand-up comedy film, and it definitely shows. It was very professionally done, and ya' know, I was so busy laughing I didn't give it much thought when I watched this.

There are plenty of silent spots throughout the track, but you know what? I don't care! To hear a commentary track with a stand-up comedy DVD is absolutely brilliant. I know that comedy isn't as big of a market for home video as a mainstream film, but to see that they actually took the time to throw this on the disc is impressive.

"The Roastmaster Comes Home" Documentary Feature - This is only a little over fifteen minutes, but we see a little footage of Jeff hangin' around his hometown with the family, visiting places like the family business, as well as his high school where he actually did a Q&A just a couple of days before the performance on this disc. There's a good amount of that footage here, as it gives us some insight on how it was growing up for Ross. An interesting watch for sure. 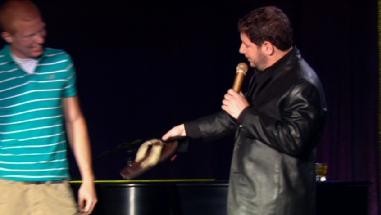 If you're a fan of stand-up comedy, then you owe it to yourself to see Jeffrey Ross step on stage for his first mainstream show for Comedy Central. He keeps changing things up so you won't find yourself bored, and I'm sure you'll appreciate his courage for relying on audience members to come on stage and play the piano to help his act. The video quality is very good for a stand-up comedy release; although it's unfortunate we only have a stereo track to accompany it. The inclusion of a commentary track and mini-documentary are more than welcome, considering this genre never gets a proper treatment. Even if the commentary wasn't here, Jeffrey's performance is well enough on its own, and is definitely worthy of being recommended.