I love old serials.  Sure they're hokey and contrived and the plots are needlessly convoluted, but where else can you get 15 minutes of action and adventure rolled up into one neat package?  Unfortunately there are only a few companies that release serials these days, and with the demand so low it's often not economically worth while to restore them.  Enter The Restored Serials Super Restoration Corp.  This newcomer to the serial game cleans up the chapter plays and releases them on very affordable editions.  Their latest release is a fun Columbia serial The Green Archer.  It's 15-chapters of fun and excitement. 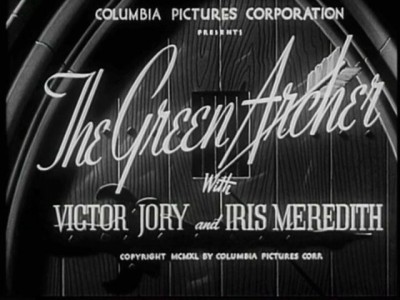 Michael Bellamy (Kenneth Duncan) has cheated his younger brother Abel (James Craven) out of inheriting Garr Castle by framing him for a crime.  Abel gets sentenced to 20 years in prison and is being sent off to the big house as the story begins.  Fearing that Abel may be able to prove his innocence, Michael has the train carrying his sibling de-railed killing many on board.

Michael wanted Garr Castle, filled with secret passageways and trap doors, not to live in but as a base to run his criminal organization.  With Abel out of the way, he starts planning a crime spree, stealing valuable jewels to increase his already substantial wealth.  When Abel's wife, Elaine (Dorothy Fay), shows up at Garr castle with no where else to turn, the elder Bellamy son kidnaps her to... well... just because!  He holds her hostage in case something happens that... ummm... because he's a bad guy and that's what bad guys do.

With Elaine missing, her sister Valerie Howett (Iris Meredith) and their father Parker (Forrest Taylor) turn up to investigate.  They run into Abel's best friend, an insurance investigator with the manly made-for-action name of Spike Holland (Victor Jory.)  Together they try to discover just what is going on at Garr Castle, where Elaine is, and try to stop the string of jewel robberies that have been occurring. 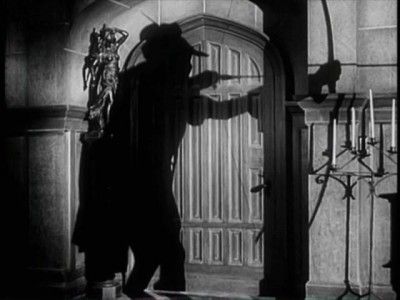 There's one more wrinkle though.  According to an old legend in the Bellamy family, whenever misfortune strikes the clan a mysterious figure called the Green Archer will appear to set things right.  Michael uses this legend in his crimes too, having one of his henchmen dress up as the Archer to throw Spike and Valerie off the trail.  But a second Archer appears one that's trying to help Spike.  Who could this Green Archer be, and will he be able to stop Michael and his nefarious plans?

I really enjoyed this serial, though I'm usually not a huge fan of Columbia's output.  This was Columbia's 12 serial, and they assigned veteran comedy director James Horne to helm the production.  Horne had a long career before starting to shoot serials, directing such classics as Buster Keaton's College and the immortal Laurel and Hardy short Big Business as well as their feature Way Out West.  He had directed several other serials by this time, including The Shadow and The Spider's Web (which Stan Lee cited as an inspiration for the creation of Spider-man) and he does a solid job with this one.  His comedy background creeps in occasionally with villains mugging for the camera and not one but two comic reliefs (a dopey police sergeant who thinks Spike is behind all of the crimes and Michael Bellemy's goofball aide Dinky (Kit Guard.)  Still, Victor Jory manages to play his role mostly straight and that gives the adventure a nice grounding.

The plot is typical serial hokum that is enjoyable but fun.  Every episode Spike tries to foil another one of Bellamy's jewel robberies while hoping to find Elaine.  He more often than not gets jumped by about four or five thugs and puts up a good fights (with the film sped up to make it more exciting) before being knocked out from behind.  He's then put in a trap, only to have the Green Archer help him escape. 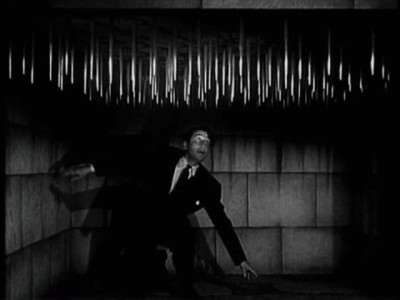 The plot veers a bit in the later episodes when Bellamy decides to steal a secret formula that a scientist is working on that's worth millions, and tries to frame Spike of the crime.  While this seemed out of character for the criminal, the change was nice, even if it wasn't too dramatic.

As with most films of this type, The Green Archer is filled with awkward serial dialog such as when Spike explains to Valerie:  "We suspect Bellamy of many things the most important of which is the disappearance of Michael's wife, your sister..." (as if she'd forgotten who her sister was) and one of my favorite lines in the serial: "Let me finish him boss!"  (As Spike is captured by Bellamy and his goons.)  "No.  That would be wasting a bullet.  I've got a better idea...."  (Unfortunatly the idea did NOT include sharks with lasers mounted on thier heads.)

The cliffhangers that end each installment weren't of the highest caliber.  Many of them didn't play fair (in the next chapter you'd see Spike jump out of a car just before it goes over a cliff, something that was conspicuously missing from the earlier installment) and some were just silly like when Spike is unconscious in a room filling with poisonous gas.  The gas covers him and then he wakes up and turns it off and leaves, none the worse for wear. 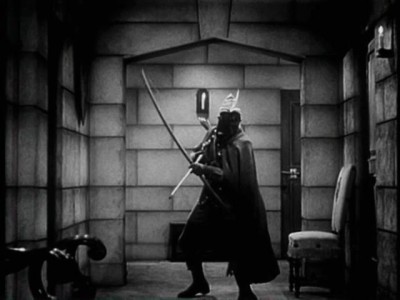 Even with these flaws, this was a lot of fun to watch as long as you spread it out some.  I never watch more than one chapter at a time (though I sometimes squeeze in two chapters at different times of the day) because more than that and the plot holes become too glaring and the narratives twists and turns just seem silly.  Watching it one at a time makes it much more enjoyable.

This 15-chapter serieal comes on two DVD-Rs which have been coated to protect it from typical wear and tear.  While I haven't had much experience
with the TDK Armor discs, it's a great idea which eliminates the main complaint I have about DVD-Rs, namely that they are easily scratched.

The two channel mono audio is only fair.  As you would expect from a serial this old there are an accumulation of flaws.  There's a hiss in the background, the range is pretty limited and there's some mild distortion in all of the louder sections.  This doesn't ruin the show however.  The dialog is almost always easy to hear and even all of these flaws together don't make the show hard on the ears.  While it's not a stellar audio track, it's very suitable.

The full frame black and white image looks pretty good for an old serial like this one.  The first thing that is noticed is that the framing is off just a bit.  There is more information on the right side than on the left, but the other copy I have of this serial contains the same issue and I've been assured that they are from different prints.  It's likely a flaw that was introduced a few print-generations ago.  There is some minor aliasing in parts and some blocking visible in the few fire scenes, but these are minor.  The black levels are nice and the contrast, while not great, is good.  There were a lot of scenes that were shot day for night, and these can get murky and hard to see at times, but that's more of a product of the film itself rather than the transfer.  The image was a bit soft in places, but overall the level of detail was fine.

I also have the VCI release of this serial.  In a side by side comparison this current version looks better.  The level of detail and contrast are very comparable but there are two areas where this edition is superior:  black levels and dirt.  The blacks here are nice and inky, as where they're a little light in the VCI edition.  Also the VCI release also has significantly more print defects, hairs, dirt, and scratches that have been removed from this version of the serial.  While I'm very happy with the VCI disc, this release does look better.

There's a lot of great stuff included on these discs, though most of it is in the form of .pdf files.  On the first disc there are images of the kit that was released to theater owners to promote the serial (upon its rerelease in 1957.)  It has ideas on how to increase interest in the series (including having an archery competition!  Where?  In the lobby?  That sounds safe.), has reviews and press-release material, as well as photo-ready ads for the newspaper.  There's also a selection of five lobby cards from various chapters.

The most interesting bonus item is a 384 page script, including a scene breakdown, for the lost film Terrible People (1928.)  I was quite impressed that they included the whole thing, and I plan to read it soon.

Disc two has a nine-minute interview with star Victor Jory that was recorded in what looks like the mid 70's.  He talks about how he got started in film and briefly about working with this serial's director James Horne.  Oddly enough he barely mentions The Green Archer but it's still a nice interview with this man who had a very long career in Hollywood.

I really enjoyed this serial, plot holes, silly coincidences and all.  Though the Archer himself plays a small role, more of a Mr. Deus ex Machina who comes to the rescue just when you're forgotten about him, Victor Jory does a good job carrying the serial with the help of Kenneth Duncan who makes a great villain.  This restored version, while not prefect, does look better than other versions on the market that I have seen and includes some wonderful extras.  If you've never seen a serial before this wouldn't be a bad place to start and fans of the style will want to pick this one up.  A strong recommendation.