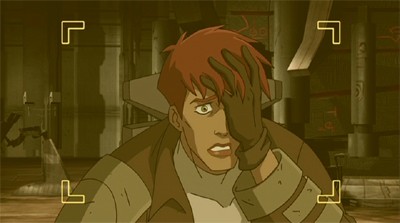 It's amazing how the gaming industry has grown over the years if you stop and think about it. What started out as a way for us dorks to drop quarters at the arcade, turned into a multi-million dollar industry with legions of fans across the globe. Since the advent of the PlayStation, the gaming industry has become a viable business and its mainstream attention has been growing ever since. Nowadays we see game franchises spreading beyond their console boundaries (though back in the day we did have those classic Nintendo cartoons and such). Take EA's latest property, Dead Space for example. What could have otherwise been just been another science fiction horror game has turned into a marketing giant with comic books and a feature length animated movie. This kind of stuff just wasn't as widely available a decade ago.

While the actual Dead Space game itself is a high-quality survival horror experience in space with plenty of critical praise, it doesn't quite tell the whole story. Hoping to catch some of that core audience and potential introduce others to the property, Dead Space: Downfall tells the story from somewhere near the beginning. In fact, the events that take place in this film lead right up to the start of the game.

At a remote space colony, the mining ship USG Ishimura, has been summoned to pick up a rare alien artifact discovered deep beneath the surface. A large hole is cut in the ground and the artifact is brought aboard the ship, but before the Ishimura can be sent along on its merry way a tragedy strikes the colony back down on the planet. The people begin behaving erratically and violently by committing gruesome homicides and mutilating themselves in disturbing suicides. Sufferers of this dementia keep muttering something about "them" and unity, but whatever is happening, it's quite clear they are not in control of their actions. 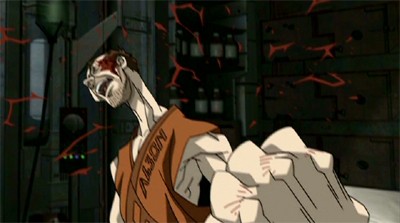 Basically, there's this alien race that comes along with the artifact for whatever reason. These mysterious aliens have an insatiable lust for our blood and want nothing more than to get into our bodies to turn us into them. The dead walk again as flesh eating alien zombies and things take a turn for the worse when they make their way aboard the Ishimura. I say "for the worse" due to the fact that the ship's captain has orders to bring this artifact back to Earth. Along with the artifact comes a bloodthirsty alien horde. Earth. Alien zombies. You do the math.

In order to save her ship, her team, and potentially her very race the Ishimura's security chief, Alyssa Vincent, steps forward as the only voice of reason. Her instinct turns out to be correct as the bodies start hitting the floor and the blight of alien monsters starts munching on people's intestines. Unfortunately in a situation such as this, "I told you so" doesn't quite cut it. What happens next is an all out bloodbath which essentially leaves nobody unscathed. Needless to say, this isn't for the faint of heart. 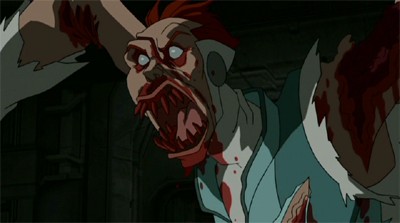 Alyssa and her team blast away with guns, slice monsters in half, dismember limbs, gut people, and sever heads. The gruesome affair is all kicked off with a self decapitation by a deranged woman, and I dear say that really gets the party started. People continue to bludgeon themselves, get ripped apart by zombies, and all sorts of other nasty bits throughout the movie. If you have played the game, then chances are good you're already expecting the gruesome nature to be taken to this degree. Trust me when I tell you that it doesn't disappoint. Red was the animation team's apparent color of choice.

Violence and overall plot aside, Dead Space: Downfall is a flashy kind of film, but it really just feels like one part of a whole. It doesn't stand on its own two feet very well and even though this is supposed to supply background for the game, there are still many questions left unanswered. The characters are also not developed quite as well as they could be, and many of their motivations remain unclear. Perhaps these bits are revealed throughout the game as you explore the Ishimura in the aftermath, but it doesn't help matters for Downfall as a standalone experience due to its anticlimactic nature. All things consider, the film is easily recommended as an accompaniment to the game, but if you're not interested in playing it then you really have no reason to bother with it. 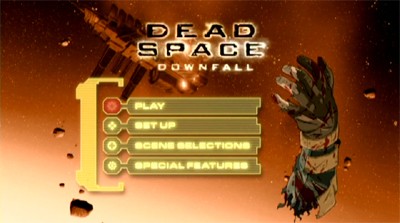 Dead Space: Downfall is presented on DVD with a spiffy transfer and 1.78:1 anamorphic output. The production of the film offers familiar designs from the Dead Space universe and all around smooth animation. As depressing as the movie can be at times, the quality of the artwork and animation never slouches, and for the most part the atmosphere is kept up throughout the whole film. Technically speaking the DVD offers some fine quality with a defined clarity, vibrant colors, and a relative lack of aliasing, compression artifacts, or grain. Some blocking did crop up from time to time in the backgrounds, but these instances were few and far between, and hardly distracting. This is about as pretty as grittily animated science fiction can be.

Presented with English Dolby Digital 5.1 as its main audio source, Downfall actually has a lot going for it. The show's presence on the soundstage is immersive and intuitive, with plenty of ambient noise and atmospheric notes that will send a shiver up your spine. The squishy sound made by ripped flesh, the shriek of alien zombies, and the many miscellaneous effects ring through loud and clear with a nice spread across every channel. There are some moments where it's not quite as sharp as it could have been, and some of the directionality isn't as spot on as it is in other moments, but all around the 5.1 offering here does the job and does it well.

Dead Space: Downfall is home to a few noteworthy bonus features, but there's nothing truly substantial here. Kicking things off, there is the "Isolated Soundtrack" which is just a black screen that runs the music of the film. There was originally a different ending for the movie that was never produced and it's presented here in the form of black and white concept drawings and a few voiceovers. It's interesting enough to watch though it's not very cohesive. Otherwise all you're going to find here are some trailers for the game and movie, an art gallery, and there's an Easter Egg in the extra's menu with a code for the game. 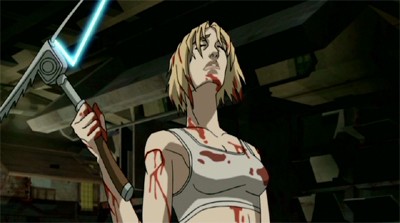 Dead Space: Downfall isn't a terrible film. It has an interesting premise, there's plenty of action, and there's enough back story to serve as a nice tagalong for the game. Unfortunately the characters don't really stand out, the story never really develops, and all around it feels like a rather empty experience if you haven't played the game. Skip it if you're just looking for something to watch since it doesn't really stand on its own legs. However, if you're a Dead Space fan wanting more from this fascinating universe then by all means check it out.