Grandpa for Christmas, A 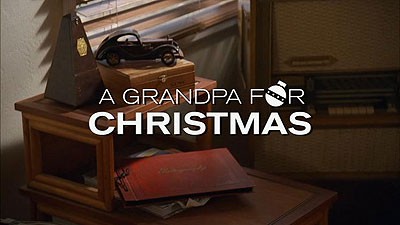 
The Movie
I can't believe it's the first week of November and I'm already reviewing my second Christmas DVD this year. If this keeps up, I'll be burnt-out on the holidays before Thanksgiving. That goes double if I get more titles like A Grandpa for Christmas, a movie that I was willing to give a chance, despite a title that definitely gave me pause, coming from the TV movie school of "A Blank for Blank." (I'm currently polishing a second draft of "A Tube Sock for Arbor Day.")

When her mom gets in a car crash, angry young Becca (Juliette Goglia, "CSI") is forced to live in Los Angeles with former actor Bert (Ernest Borgnine), a grandfather she's never met, after her mother and grandmother bad-mouthed him constantly. The arrival of Becca disrupts his regular schedule of breakfast with his show-biz pals and not much else, but he welcomes the chance to spend time with her, despite her cold reception. If you can't guess what happens next, as Becca adjusts to her new school and tries out for the Christmas pageant, you're just the audience for this film, as you're likely also impressed each time you pass a mirror and cry at greeting-card commercials. 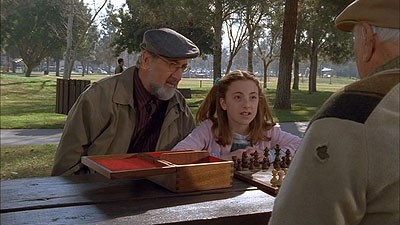 The film follows the traditional formula for films like this, but the acting is anything but average, aided in no way by a script that ignores conventional movie ingredients, like motivation and natural-sounding dialogue. Borgnine turns in an utterly broad performance as Bert, emoting with the subtlety of a claw hammer, utilizing ham-handed gestures and body language and the biggest, happiest face ever to grace the head of a man. It is incredibly hard to take Bert seriously as his eyes bug out and his dialogue only makes him more ridiculous, as his melodramatic, urgent delivery, verging on a constant panic, with lines like "Ma'am, we need to talk!" lends him an air seeming insanity (frequently talking to himself does not help either.) At the same time, he seems like a pretty great grandpa.

(Note: I don't know how much of Borgnine's performance can be attributed to his hearing loss (his hearing aid is visible in several shots), but I don't want to come off as an insensitive ass, so I figured I'd mention it.)

As Becca, I can't say Goglia did the trick for me. Part of the problem is her preternatural maturity, which serves to make a kid aggravating, especially when they are being little jerks. There's something about her face, which frequently suggests a knowing smirk you'd like to smirk. Perhaps my view of her is colored a bit by her memorably evil appearances on "CSI," but it's hard to buy her as a kid, especially when she breaks into song (as she's an excellent performer (if that's her voice.) The rest of the cast of TV veterans is actually pretty good at making due with the sunshiney and inconsistent script, including Tracy Nelson (Sister Steve from "Father Dowling Mysteries") as Becca's mom and Jamie Farr and Katherine Helmond as Bert's friends.

For all the things that didn't click for me, the biggest problem with the film is the setting. Christmas in Los Angeles just doesn't feel like Christmas, which robs the story of the natural magic of the season. A bit of snow, or perhaps just a reason to wear a light jacket would have helped, since outside it's barely fall. Maybe I'll have to revisit this film when there's a nip in the air. 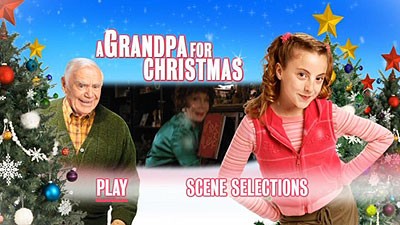 The DVD
A one-disc release, this DVD is packed in a standard keepcase, and features an animated anamorphic widescreen menu with options to watch the film and select scenes. There are no audio options, no subtitles and no closed captioning. This is a bare-bare bones release.

The Quality
Presented in an anamorphic widescreen transfer, this film looks terrific for the most part, with a very sharp, colorful image that's got a healthy amount of fine detail and no obvious issues with dirt, damage or digital artifacts. The only negative is some noise in darker moments.

The Dolby Digital 2.0 soundtrack is solid, but average, presenting the films rather quality, if telegraphing score quite well, along with clear, unmistakable dialogue that's free of any distortion. There's nothing dynamic in the center-focused track, but for a TV movie like this, that's to be expected.

The Extras
As noted before, this is a bare-bones DVD. On top of a lack of audio options, subtitles and captioning, there's also no extras. I'm trying to figure to decide if that's good or bad. 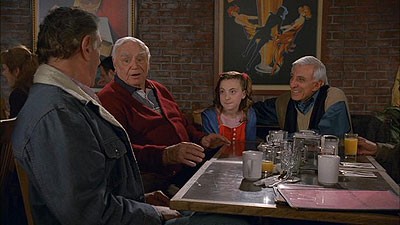 The Bottom Line
A Grandpa for Christmas is the definition of a Hallmark movie, substituting emotion and schmaltz where most movies have story or character. That said, it's easy to see an audience for this technically well-made heart-string tugger. The DVD looks and sounds just fine, but offers nothing beyong the base film, so you'd either need to be a big Borgnine fan or desperate for some low-grade Christmas cheer to pick this one up.