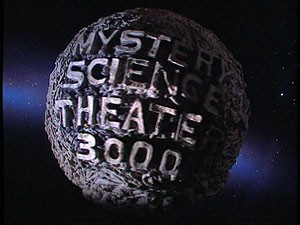 
The Story So Far..
A couple of janitors, first Joel, then Mike, are forced onto the Satellite of Love, where they have no choice but to watch terrible movies, as part of experiments by a series of mad scientists. Fortunately for them, they have a couple of robot pals who watch the movies with them, and they spend the whole time making fun of the film. A hit on local TV in Minnesota, and then one of Comedy Central's first successful series, the show ran for 10 seasons before leaving the air, taking with it a cult audience who enjoy watching bad movies with friends who make fun of them. Before the rights recently went to Shout! Factory, Rhino released a number of MST3K DVDs, and DVDTalk has reviews of 16 entries here.

The Show
"MST3K" is an unusual TV series to put on DVD, as there are few series with episodes that run nearly two hours in length. As a result, even the shorter season sets could need seven DVDs (before you even get to any bonus material.) So the many MST3K releases have been either single films or four-packs, and most of those have picked over the series' best shows, like Manos: The Hands of Fate , Monster A-Go-Go and Santa Claus Conquers the Martians. So naturally, the anniversary collection would instead focus on landmark episodes, to properly celebrate the series.

Well, that didn't quite happen. Instead, we got one important episode, the last one made for Comedy Central, and a trio of bland films with OK original material. Fortunately, the show was so good that even OK episodes are well worth watching. That includes episodes centered around movies that are, at best, incomprehensible, like Future War. Perhaps it's the distraction of the commentary, but boy, this is thing makes zero sense. A quick rundown of the subjects involved: a nun who used to be a whore, dinosaurs, Spanish gangs, cyborgs, and a human slave/martial arts expert. To be honest, in the right mix, that could make for an interesting film, but here, it's just a badly-made disaster. It's challenged for worst film in this set by Werewolf, which is easily the worst werewolf movie I've ever seen, partially due to the awful special-effects make-up, but mainly because there's barely a story being told by a team of blindfolded coma patients (or at least it looks like it.) 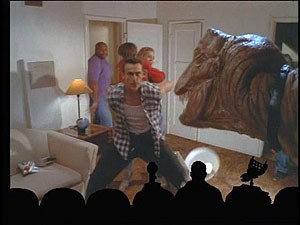 Laserblast, despite the imaginative title, is another example of bad movie-making mixed with well, more bad movie-making, telling the tale of an angry young man who finds an alien weapon that begins to turn him into a monster. The sad thing is, in capable hands, it might have been interesting. The same can't be said about First Spaceship on Venus because it actually was made by some pretty capable hands, as it's based on a novel by Solaris creator Stanislaw Lem, and is a moderately respected sci-fi flick (like the subject of the MST3K movie, This Island Earth) Fortunately, the very dated sci-fi elements and unimpressive acting help provide enough fodder for the guys to riff on. None of these films are as memorably bad as the series' best victims, existing in a middle ground of crap.

The set is heavier on Mike episodes, by a 3-to-1 ratio, which makes some sense, since there are more Mike episodes in the series' run, but an even split with the Joel era would have been more appropriate, considering it was Joel's show and the fans loved Joel and his laid-back personality, which fit the concept well. Sadly, the one Joel episode, season two's First Spaceship... is not one of his best, as the riffing is not aided by a slowly-paced movie, and the host segments are rather bland, especially the fake food commercial, which goes far too long. But it's nice to see Joel here, as he set the tone for the series and his style is so comfortable and understated that it let the jokes shine.

The Mike episodes are all much more recent, and feature two films made in the 1990s. It's proof that it's never too soon to make fun of a bad movie. Mike, who was the show's head writer during the Joel years brings a different feel to the show, as he's more anything-goes than Joel, resulting in more high-energy host segments (like his girl-group performance of "Where O Werewolf" and his turn as Captain Janeway from "Star Trek: Voyager") and sillier riffing. I was always a bigger Joel fan, but in watching these episodes, Mike's definitely grown on me (if only for his James Lipton imitation. What hasn't grown on me is Pearl, the replacement for the guys' nemesis, Dr. Forrester. Whether on her own, or with her henchmen, Brain Guy and Bobo, she's grating, but then, I never was a big fan of the bad guys on the show. I just wanted to get back to the movies.

Though the segments aboard the spaceship with the host and his robots can be fun, the show is at its best when its watching movies and cracking jokes, many of which are actually pretty smart (while some are a bit dated and will fly over the heads of younger viewers.) There are a few categories this riffing can fall into, including simply commenting on problems in continuity or the terrible acting, but the best tend to be the dialogue replacements, when they fill in blank spots in the scripts or talk over what's being said on-screen. This works especially well in the more inane films, as the lack of story structure frees them to say just about anything, and the sillier their comments, the better they are (with the small throwaway lines often earning the biggest laughs by catching you off-guard.) When they hear the bizarre accent and enunciation of the female lead in Werewolf, it's like they were handed the comedic equivalent of an assault rifle, as the jokes are non-stop. Unfortunately, these moments aren't as frequent as one would like, again pointing out that this really isn't the best-of you'd expect for a 20th Anniversary collection. 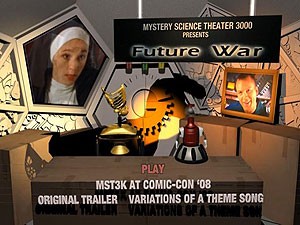 The DVDs
The 20th Anniversary release of "Mystery Science Theater 3000" was a blow-out package with nifty little doodads and fancy packaging for the fans. It was also sold-out from the distributor almost immediately, so Shout! Factory followed up with a less impressive second printing that dropped all the frills. Unfortunately, that's the one we got to review. The four films each get a disc of their own, packed in a clear ThinPak with nice illustrated cover art, while the four cases are held in a simply-designed cardboard slipcase. The discs feature amusing animated full-frame menus, with options to watch the film or check out the extras. There are no audio options and no subtitles, and no closed captioning.

The Quality
There's no effort to make the full-frame transfers of the movies being savaged look good, which makes sense, so you frequently notice dirt and damage, along with inconsistent brightness and jitters. But despite that, the movies are certainly watchable. Considering that three of the four episodes here were taken from the show's final four seasons, I expected them to look pretty good, and they do. The other episode, from 1990's second season, looks much better than expected, with good color and an overall sharp image showing no problems with dirt, damage or compression. The silhouettes at the bottom of the screen can show issues with pixilation at times, oddly more so on the more recent episodes.

The Dolby Digital 2.0 soundtracks are as simple as the sound was when these shows first aired, presenting center-focused audio without any attempt at dynamic mixing. The separation between the film audio and commentary could be better, but it's not bad either.

The Extras
The main extra here is the 90-minute documentary The History of MST3K, which is split over three of the DVDs. Made up of sit-down interviews with the cast and crew mixed with old footage from the show, the film goes back to the beginning of the series, illustrating how it was created, looking at the changes that took place as the show went national, changed networks and hit theaters itself, before exploring the show's impact, including the rabid fan base and cult favorite status. Very simple in its construction, it's not the most stylish or engaging film, so you've got to be a fan to enjoy it, but if you like MST3K, there's a wealth of info here to check out (even if it glosses over the important and controversial change in hosts.)

Another pretty impressive bit of bonus material is the 20th Anniversary panel from the 2008 San Diego Comic Con, with geek god Patton Oswalt serving as emcee for the event. Pretty much everyone's in attendance here, including Hodgson and Nelson, as they take questions and go over the history of the show for 38 minutes. As you might expect from the gang behind MST3K, and with Oswalt running the show, there's a lot of jokes and silliness, along with some good info.

The other big bonus is the 9:31 "Variations on a Theme Song," which puts every version of the show's catchy theme song and opening sequence back to back. It's great to watch the evolution of the song and the title concept, which is actually mostly in place from the start, just getting adjusted and advanced with time, as the story requires changes.

Each film also arrives with its original trailer in tow, giving you an added dose of crap to enjoy. 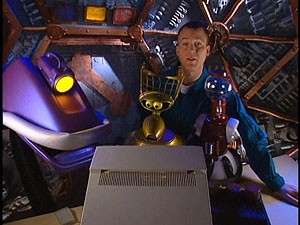 The Bottom Line
Without all the bells and whistles, this set is just a collection of middling episodes with a few decent extras, including one very cool documentary. As such, it's not really worthy of "20th Anniversary" status. That said, it looks and sounds as good as you would expect for a low-budget series made around old movies, and the extras are actually pretty cool. Your need to own this set will depend on your addiction to the Satellite of Love, but anyone who enjoyed the series will absolutely want to see the documentary.