X-Files: I Want to Believe - 2-Disc Extended Cut, The 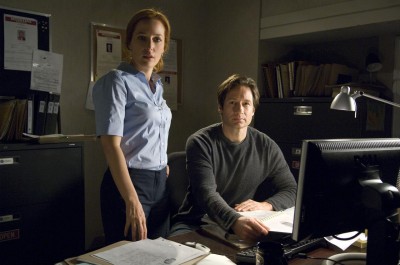 Hard to believe, but it's been a full decade since the last "X-Files" picture, "Fight the Future," hit the big screen to enthusiastic response, plunging the then-running television series even further into ferocious alien disturbances and its own vast sci-fi mythmaking quest. It's a different world for the "X-Files" brand these days, and "I Want to Believe" reflects the change of pop culture weather, turning inward to produce a spooky drama for the fans this time around, not multiplex mass acceptance.

When an F.B.I. agent goes missing after a violent attack, the bureau (including Amanda Peet and Xzibit) turns to Father Joseph Crissman (Billy Connolly), a convicted pedophile with psychic abilities who can sniff out the body parts left behind by the unknown assailant. Finding a dead end in the case, attention is focused on Fox Mulder (David Duchovny), the former "X-Files" believer turned recluse after being stripped of his credibility. Mulder is reluctant to assist in the investigation, and probes ex-partner Dana Scully (Gillian Anderson) for advice. With the clock ticking, the duo is pulled into the case when a second person is abducted.

"Fight the Future" led off with a literal bang before assembling a tight, forceful tale of conspiracy theories, aliens, bees, and black oil, enthusiastically playing into established "X-Files" parameters while remaining a well-executed horror/action creation to please those new to the labyrinthine franchise. "I Want to Believe" isn't as generous this time around to the newbies, with series creator Chris Carter grabbing directorial control and crafting a feature that stands out from the congested holiday DVD blockbuster environment by remaining alarmingly unflappable and looking to provoke not with ghouls, but with studious questions pitting science vs. religion.

Now this is the part where readers will surely tense up and hold their breath hoping I won't spoil the movie. I wouldn't dare. However, I can write that "Believe" is a provocative picture that gives serious weight to vital medical and religious issues, using Scully's role as a skeptical medical expert at a professional turning point to broaden the feature's thematic search for faith and all its unbecoming perversions. It's not profound sermonizing, but it eats away at a majority of the running time, leaving Scully and Mulder gasping for belief as they try to hold steady to the controversial paths they're drawn to.

It's a captivating exploration for an "X-Files" film, but does it equate to a rollicking time at the movies? Not exactly.

Carter has made a commitment to a more cerebral adventure for his characters, fixating on the discomfort between Mulder and Scully as they assume their old responsibilities. This uneasiness extends to the screenplay, which is heavy with expositional speeches, rendering the film stiff and overindulged at certain points. Since the television series was killed in 2002, it's to be expected that the producers would find it difficult to recharge rusted geek zeal, trying to rekindle the poised passion between Mulder and Scully, but often leaving the film slavish to discussion, not action. Carter, who's never directed a feature film before, almost seems terrified to spin "Believe" into something befitting a traditional widescreen release, perhaps fearing any deviation from the rhythms of the T.V. show would quickly spiral out of his control.

Noting the lack of deliberate thrills isn't a complaint, just an occasional mild annoyance, with "Believe" sticking with spooky happenings and faltered interpersonal communication. It's a mysterious film, building dread through brutal kidnappings, displays of Bryukhonenko-inspired horrors, and the Crissman character, who Carter employs as the critical figure of eerie face-value judgment. It takes nearly an hour for "Believe" to work up a sweat; the film favors the tempo of the series, not the bombast of the screen. Fans are sure to drink up every last frame. The less inclined might be checking their watches with increasing regularity.

There are two versions of "Believe" offered on this DVD: the Theatrical Cut and a new Extended Version that runs a scant four minutes longer. Primarily consisting of small character moments (Scully receives a nice, gentle moment of teary frustration), brief snippets of violence (released from their PG-13 bondage), and a new set of end credits, the extension makes for a more united viewing experience, but it's hardly a radical new reworking of the film.

Fox provided DVD Talk with only a DVD-R screener of "I Want to Believe." While containing an anamorphic widescreen (2.35:1 aspect ratio) transfer, the image was riddled with compression problems and watermarks making it unfit for review.

Again, while in screener form, the 5.1 Dolby Digital mix appears to be consistent, with luxurious snowscape atmospherics and pop-happy thriller hot spots. Being a screener, I couldn't detect any outrageous audio inadequacies. Spanish and French 2.0 language tracks are also included.

A feature-length audio commentary with director Chris Carter and producer Frank Spotnitz is an exceptionally straightforward listening experience, with the filmmakers calmly exploring every scene for production detail to chat about. Carter leads the discussion with a pleasing authority, and the commentary is educational (they discuss the extended cut changes), especially with some of the more subtle turns of the screenplay, but the excitement level is lacking. Maybe the gentlemen recorded this track around a basket of sleeping kittens they were terrified to wake?

Recorded a month before the film's release, what the commentary lacks in perspective and volume it makes up in sheer information. Fans will certainly enjoy it.

"Body Parts: Special Makeup Effects" (8:08) introduces the viewer to Bill Terezakis, the quirky makeup designer for the film. Leading a tour of his workshop, Terezakis reveals the tricks of the makeup process, showing off some incredibly gruesome, thoroughly mangled limbs during the featurette.

"Gag Reel" (9:48) is a run-through of the crazy-mix-em-ups unearthed during filming. Obviously, viewing this collection of silliness decimates the menacing mood of "Believe," but as gag reels go, this presentation has plenty of big laughs.

"Dying 2 Live" (4:04) isn't so much a music video from Xzibit as it is a musical montage of film stills set to a dreadful rap tune.

"Still Galleries" for Collectibles (covering the entire run of the show - a highlight of this DVD), Storyboards, Concept Art, and Unit Photography are included.

"Trust No One: Can 'The X-Files' Remain a Secret?" (85:55) is a sprawling documentary primarily focused on the fears the cast and crew faced putting the franchise back together after an extended break from the spotlight. Broken down into three acts, the doc covers the meat of the "Believe" production, interviewing cast and crew about their experiences returning to the land of "X-Files," with specific attention paid to Chris Carter, Frank Spotnitz, David Duchovny, and Gillian Anderson. The foursome articulates their fears and hopes stepping back into this world, mixing long-winded artistic desires with silly anecdotes to keep the interviews interesting.

While gloriously crammed with generous BTS footage and a running time that allows a step-by-step walkthrough of production (from script to screen), the theme of the documentary is secrecy. Hoping to keep fandom at bay while they made the picture, Carter and Spotnitz embarked on a tenacious campaign of misinformation, going well out of their way to feed the geek sites with nonsense to protect the integrity of the final project. Spotnitz was especially dogged about confidentiality, hoping the picture made it to release without any knowledge of the plot leaking to the public.

Unfortunately, the documentary isn't a postmortem discussion of "Believe." Instead, interviews are conducted onset, where hopes and dreams were high for theatrical success. Overall, "Trust No One" is an outstanding effort to impart detailed production information, but where did all the effort to hide the film lead? A needless box office death this past summer. Some reflection from the creative team should've been included for needed perspective.

While I wasn't electrified by "Believe," I was immensely satisfied with Carter's intent, and his appreciation for Duchovny and Anderson, who really shines as Scully is dragged through a vigorous questioning of self. "I Want to Believe" is not a feature that provides instant results; instead, even with a handful of faults, it gets under the skin, offering the faithful a rewarding odyssey with these unlikely knights of the unknown.