Having apparently moved from Image Entertainment to Infinity, Retromedia has lined up another sword-and-sandal, public domain double-bill of dubious quality, transfer wise, Samson and the 7 Miracles of the World (1961) and Ali Baba and the Seven Saracens (1964). Samson is 16:9 enhanced widescreen, but that's the only thing that can be said in its favor. The print sourced for the transfer is heavily cut, ridden with splices and jump cuts, heavily damaged and drained of almost all its color. Ali Baba, from a 16mm AIP-TV syndication print, is 4:3 panned-and-scanned and, arguably, looks even worse though the color and sharpness are a bit better. Ironically, a batch of 4:3 letterboxed trailers, possibly sourced from PAL, look far better than either film, even when zoomed in on widescreen sets.

Though one appreciates the enthusiasm Retromedia puts into such titles, and historian Gary Smith's back cover notes show some affection, the transfers aren't doing fans of these movies any favors, especially as more become available in Europe with stellar transfers. It's not likely anyone will pony up the dough to license these new editions when crappy PD versions are already in wide release. 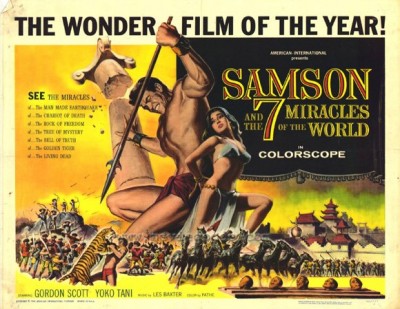 Samson and the 7 Miracles of the World, billed minus "of the World" on the box, started out as an Italian-French co-production and Maciste movie, Maciste alla corte del Gran Khan ("Maciste at the Court of the Great Khan"). The project was prompted by some sets left over from Marco Polo, released later that same year as things turned out, though what we see here isn't all that spectacular, certainly nothing on the level of the filmed-in-Spain Samuel Bronston spectacle 55 Days at Peking. Most of the exterior sets look like they were redressed from something else, and an obvious matte shot (by Mario Bava, possibly) doesn't match other angles of the same part of the backlot.

Set in 13th century China, the story concerns the oppression of the Chinese by Mongol invaders. Garak (Leonardo Severini, about as Mongolian-looking as John Wayne) plots to marry his way to the throne via Princess Lei-ling (Yoko Tani, also the female lead in Marco Polo) while suppressing the uprising led by half-Chinese rebel leader Cho (Gabriele Antonini) and teenage prince Ti-sung (Luong-Ham Chan [?], dubbed here by Peter Fernandez). Into this mess inexplicably strolls Samson/Maciste (ex-Tarzan Gordon Scott), who naturally sides with the oppressed Chinese.

Unfortunately, Samson and the 7 Miracles of the World plays like an extended highlight reel rather than a complete movie. Retromedia's DVD of the film runs just shy of 68 minutes, or about 11 1/2 minutes shorter than AIP's American release version. Worse, the original European release ran 96 minutes, which means that more than a half-hour, or nearly one-third of the original film, is missing.

So much is missing that characters tend to move from place-to-place suddenly, or are captured and/or escape without much explanation, and most of the seven miracles are absent, too. The herky-jerky telling denies viewers the chance to latch onto any of the characters: even Samson, who doesn't appear until well into the film, seems almost incidental to the abbreviated spectacle.

A few scenes of typical peplum action hint at a decent film lurking behind the bad presentation: Samson grapples with a tiger (played by a stuffed one in close-ups, and an obviously doped-up one in long shots with Scott); Samson clearing a passageway of solid rock for fleeing Chinese rebels. The climax is particularly impressive. Garak has Samson chained in a coffin-sized crawlspace carved directly out of a subterranean wall. The space is so small a midget has to crawl inside to chain him, and Scott looks genuinely uncomfortable and immobile. (The scene would probably freak out those with claustrophobia.) The mighty Samson, however, with his incredible strength, is able to free himself, but in doing so causes a massive earthquake.

The jumble of Asian and European actors as Chinese and Mongols is disconcerting, but the atmosphere is more authentic looking than one might suspect, with a Buddhist "monastery" looking particularly convincing. Riccardo Freda, of I Vampiri fame, directed.

Ali Baba and the Seven Saracens was actually a Sinbad movie in its native Italy, Sinbad contro I sette saraceni, but possibly AIP thought it best to change the title after the lukewarm reception that greeted their release of The Lost World of Sinbad (1963), a Sinbad-less Japanese pirate movie with Toshiro Mifune. On the other hand, they did leave "Saracen" in the title, which surely left more than one viewer nonplussed.

The story pits Ali Baba/Sinbad (Bruno Piergentili, billed as Dan Harrison) and his rebels again the evil king of Coprah, muscleman Omar (Denver-born Gordon Mitchell, one of the iconic faces of Italian genre films). Complicating matters is that Ali Baba is in love with Omar's daughter, the Rubenesque Fatima (Cuban-born Bella Cortez, Mitchell's co-star in The Giant of Metropolis). Also noteworthy here is Jookie (Tony Di Mitri), a dwarf whose efforts to open a massive stone gate hinge the entire climax, a lively to-the-death tournament for control of Coprah. For some reason Di Mitri and other "little people" frequently turned up in these films, always playing comical characters, but in parts that were never demeaning to their stature.

Much of the film takes place in an unconvincing but impressively massive Middle Eastern palace courtyard set. Mughal-type domes in the background are obviously two-dimensional painted flats, but it's big and imposing for a cheap Peplum.

The film itself is okay with plenty of action but not a lot of story, and Piergentili is no Kerwin Mathews (or Jon Hall for that matter). Mitchell is perfectly cast. He's impressively muscular - reportedly Arnold Schwarzenegger and Lou Ferrigno were among the admirers attending his funeral a few years ago - but he also had a craggy, skull-like face with piercing blue eyes, and closer in looks to John Dierkes than Steve Reeves. But he was an undeniable presence in Italian films (and a few American ones from the 1950s, including Rio Bravo); once seen, never forgotten. 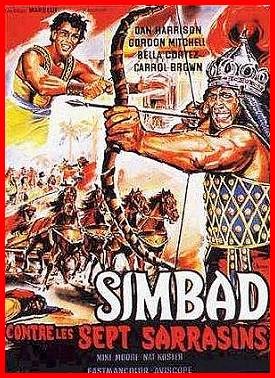 Reports are that Samson and the 7 Miracles of the World is derived from a 35mm theatrical print but you'd never know it. The image is soft and lifeless, with so many splices in some scenes it's hard to understand what's going on and impossible to catch everything that's being said. Color is largely limited to magenta; some of the day-for-night scenes are virtually black and white. Ironically, the trailers included as extras look better than this, even though the trailers are 4:3 letterboxed.

Ali Baba and the Seven Saracens, at 79 minutes (13 minutes shorter than the original Italian version) is crudely panned-and-scanned, in a transfer originating sometime in the mid-1960s. So sloppy is the Telecine some shots begin on one side of the Totalscope frame only to switch to the opposite end two or three frames in, a common goof in these direct-to-TV releases. However, the color is marginally better and the image a smidgen sharper than its top of the bill companion.

The disc is region-free.

Included are six long "Super Muscle Trailers" that seem more like English-language international release trailers than ones prepared by their U.S. distributors and are probably sourced from PAL. Included are: Hercules Against the Sons of the Sun (Ercole contro I figli del sole, 1964); Ursus and the Tatar Princess (Ursus e la ragazza tartara, 1962), also featuring Yoko Tani; Ali Baba and the 7 Saracens (on the audio; onscreen it's Sinbad contro I sette saraceni); The Magnificent Gladiator (Il Magnifico gladiatore, 1964); and Julius Caesar Against the Pirates (Giulio Cesare contro I pirate, 1964). In some respects the trailers are more satisfying than the movies.

On one hand, Retromedia deserves some credit for making these obscurities available, and for releasing 16mm and 35mm 'scope sourced prints in 16:9 enhanced widescreen. But the source material here is pretty terrible, and many would much rather see these film legitimately licensed from their Italian owners. (Presumably MGM, the owners of the AIP library, no longer have any rights to these films, though they probably have retained film elements of the U.S. release versions.) For now, fans of these occasionally fun pictures will want to Rent It.