This exceptional 20-episode box set of the anime series Death Note, a first of two volumes, explores one teenager's quest to rid all evil, and the devilish consequences that follow.

Light Yagami is Japan's brightest high school student. Unchallenged and bored, Light's tedium is suspended when he finds a supernatural notebook - the Death Note, which has fallen from the sky. The Death Note contains a list of instructions and grants its owner the ability to kill anyone by simply picturing their face and writing down their name.

Skeptical, but curious, Light seizes the opportunity to test the Death Note when a daycare center is taken hostage. After the captor's name and photograph are broadcast on the news, Light proceeds to scribble, and within seconds the culprit is dead. Light quickly grasps the immense power of the Death Note and decides to use it to create a perfect, crime-free world.

Light learns the origins of the Death Note when he meets its prior owner, a shinigami (death demon) named Ryuk, who was equally bored in his realm and purposively dropped it in the human world to stir up trouble and excitement. With Ryuk hovering nearby, Light begins his crusade to create a Utopia, feverishly writing the names of criminals worldwide.

Bad guys begin dropping like flies, and governments begin to take notice. Concern soon builds about the vigilante killer and Interpol secures a renowned, albeit mysterious, detective named L to solve the case. What proceeds is an intriguing battle of wits between Light and L - two brilliant strategists, each convinced theirs is the righteous cause.

At first it's hard not to empathize with Light's position: a world sans sex-offenders and serial-killers doesn't sound too shabby. But beware: absolute power corrupts absolutely. Light's desire for justice morphs into desire for supremacy, and he becomes willing to eliminate anyone who stands in his way. Light's descent into darkness ups the stakes in this clever, fast-paced game of cat and mouse. 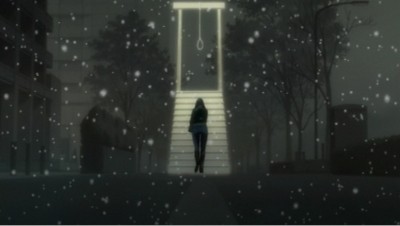 The series' characters are fascinating to watch, my favorite being L - whose adroitness, disheveled appearance, and penchant for sweets make him particularly endearing. It's also satisfying to see how quickly L narrows in on Light as a possible suspect, not through contrivance like many TV shows, but through insightful, yet realistic, deductive reasoning. Additional characters are effectively added throughout the story, which serves to layer the plot and add to the suspense. This series is highly addictive, and I found myself begging my husband after each episode to watch "just one more". Thankfully, a second box set with the remaining 17 episodes of the series is coming out this spring, so I can get my much needed fix soon. 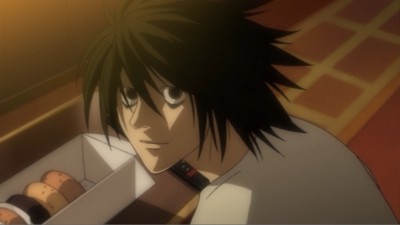 The series is presented on DVD with a 1.78:1 anamorphic widescreen aspect ratio. The animators extensively use shadowing and muted olive, brown, and grey colors to convey the story's dark elements. When bright colors are applied, the screen pops with vibrancy. Overall, it's very pleasing to the eye.
Audio:

Death Note: Volume 1 Box Set comes with both the original Japanese audio track and an English dub, both in 2.0 stereo. Given the limits of the 2.0 stereo track, the audio sounds dynamic.
Extras:

The box set includes production art; a movie trailer, some episode commentaries by the Associate Producer, English-voice actors, English Voice Director, and ADR Writer; and 'behind the scenes' featurettes with members of the English cast. Although the extras are primarily geared toward viewers who listen to the dubbed audio track, an interesting interview is included with the Japanese Series Director (Tetsuro Araki) and Character Designer (Masaru Kitao). Too bad there weren't segments with the Japanese-voice actors; these would have been a wonderful addition.
Final Thoughts:

Death Note: Volume 1 Box Set features amusing characters in a deadly cat and mouse game that's certain to keep you on the edge of your seat. Those apt to guess a story's trajectory will be pleasantly surprised with the plot's twists and turns. This fantastic series is must see for anime fans, and highly recommended for those who enjoy suspense.