Better still, Ellis and his colleagues have given the show a level of care and thoughtful consideration rare in home video. Each episode has been lovingly restored and there are a mountain of extra features and other incentives making this a highly desirable title, including audio commentary tracks on almost every episode; this region-free set includes the first 12 episodes. 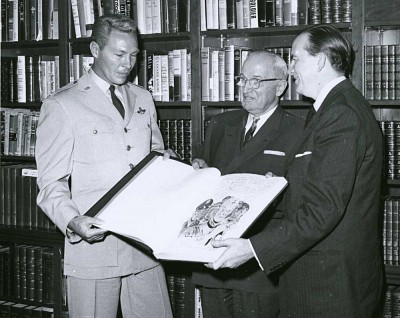 
The unusual series was very much the product of 1950s Cold War propaganda and the early postwar fascination with new technologies, especially anything involving jet aircraft and test pilots. Steve Canyon (Dean Fredericks) had the same Right Stuff as Chuck Yeager, and Gary Cooper's good looks and demeanor to boot.

Initially at least, the U.S. Air Force was eager to cooperate with the show's producers. The Air Force brass assumed the series would do for their branch of the service what Disney's Davy Crockett did for coonskin caps. Perhaps unprecedented for series television before or since, the Air Force provided the Steve Canyon crew incredible access to real aircraft, hardware, and eye-popping test and flight footage.

Each week, pilot Lt. Colonel Steve Canyon is sent off on a new assignment, often involving the testing of some fantastic - but genuine - Atomic-Age hardware, including Atlas rockets (that Canyon transports to Cape Canaveral) and rocket boosters used to launch F-100s. The footage of this stuff is amazing, partly because a lot of it was obviously ludicrously expensive and impractical, and also because the footage of these devices in actual test use is so crystal-clear and, like it was shot yesterday, a far cry from the grainy stock footage commonly seen in low-budget '50s sci-fi movies. The first episode offers a good example of this: a wild scheme to tow F-102 fighter jets from a KB-50 tanker, to enable the fighters to remain airborne for extended periods near their targets in Russia. Watching these small craft dangle like tin cans dragged behind some newlyweds' car is hair-raising, lunacy on an epic scale.

What might have been an insufferable flag-waver of a show, entertainment as envisioned by Joseph McCarthy or J. Edgar Hoover, stays consistently, dramatically interesting thanks to its surprisingly honest and emotionally authentic teleplays, most by story editor Sidney Carroll (The Hustler).

The Air Force brass likely were aghast: in the first few episodes audiences were treated to cocky flyboys who nearly cause a deadly accident at an air show; a veteran pilot, a hero during World War II and the Korean War, who suddenly develops a crippling fear of flying; another pilot with health problems who keeps flying regardless of the risks to those around him (he's got bills to pay); engineers who push their dangerous new inventions into the air before they're ready.

Though through it all Steve Canyon is like the Rock of Gibraltar, assertively stepping in and offering seasoned, rational advice to his reckless colleagues, the show's stories hardly conveyed the flawless image the Air Force expected from the show. What happened next isn't clear, but in any case the show was cancelled after just one season. 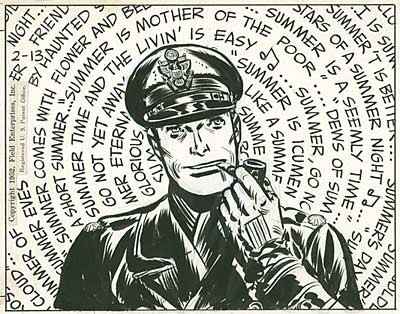 The Complete Steve Canyon on TV - Volume 1 is presented region-free in its original full frame format, on two single-sided, dual-layered, region-free discs. The black and white episodes look just great, like they were mastered straight off the original 35mm camera negative. Detail is superb and the contrast excellent. Though the series originally aired on NBC, most of the episodes appear to have been sourced from ABC masters, as the show moved to that network for reruns (along with many other NBC shows, apparently). The audio is excellent; Walter Schumann's (Dragnet) memorable theme music sounds particularly strong.

What's great about this is that not only do we get the show, but also all the ABC network material used during the commercial breaks. Not only are there the usual cigarette commercials and the like, but also promos for myriad ABC shows (and NBC reruns), including Love That Bob, The Gale Storm Show, Beat the Clock and About Faces (hosted by Dragnet's Ben Alexander), The Restless Gun (a John Payne Western series, with Gloria Talbott and Vic Morrow seen in the promo).* All of this footage looks fantastic, and it really gives the viewer a vivid sense of what watching these shows in 1958-59 really must have been like. (The running time is still just under a full half-hour, suggesting the extra few minutes were turned over to local affiliates for their local commercials and promos.)

Ten of the 12 episodes in this set include an audio commentary track. Actors Morgan Woodward, Marion Ross, and Russell Johnson, composer Nathan Scott (with family members Tom Scott & Linda Colley), television historian Brad Ulvila, aviation/film historians John Nitka and James H. Farmer, and author and space artist Ron Miller join DVD producer John Ellis on these tracks. Though a bit awkward here and there and apparently conducted over telephone lines, they hit the salient points and, prompted by Ellis, they discuss the series not just in terms of its place in television history, but also from an aviation perspective, while also putting the show into context and comparing it with Caniff's original strip.

The DVD box art is reversible; inside is an attractive full-color portrait of Steve Canyon (as played by Fredericks) drawn by Caniff, as well as a detailed episode guide noting director, writer, airdates, cast, a capsule summary of the plot and each episode's extra features.

Though it's great to see classic '50s shows like The Honeymooners and Perry Mason out on DVD from the major home video labels, for this reviewer the best thing about DVD has been discovering interesting material that, at best, you've only vaguely heard about, packaged in beautiful new transfers by smaller indie labels that give these forgotten shows and movies the loving attention they deserve. Steve Canyon isn't quite a lost classic but it's well above average and unique among '50s TV shows, and the DVD presents the material in such an entertaining, appealing way to join the ranks of DVD Talk's Collector Series Titles.

Note: This DVD is available exclusively from The Steve Canyon DVD Blogspot.

* During the 1970s, Detroit's WKBD Channel 50 ran many of these forgotten shows in a presumably syndicated package of forgotten '50s sitcoms. Besides Love That Bob and The Gale Storm Show, they also ran How to Marry a Millionaire, December Bride (and its spin-off, Pete & Gladys), The People's Choice and, my favorite, Colonel Flack. Watching these promos really made me want to seem some of these again.