There are DVDs you take home and watch immediately, DVDs that end up on a "stuff to watch" pile that might take you anywhere from a week to several years to get around to actually viewing. And then there are DVDs that are like little treasure chests straight out of Robert Louis Stevenson, boxed sets so fun and imaginatively packaged and so absolutely crammed with neat-o booklets and other memorabilia that you greedily pour over it like Wallace Berry or Robert Newton, savoring its riches.

Such is the case with The Lone Ranger - 75th Anniversary Collector's Edition, a 13-disc package consisting of the television series' first two seasons, 78 episodes, along with an especially strong selection of extra features - including a full-color, 88-page commemorative book, a comic book reprint, and a host of other collectible memorabilia reproductions. Though it's an expensive set, you get what you pay for, and a far cry from the many public domain releases of Lone Ranger episodes currently flooding bargain bins. (Rhino released a four-disc set of shows from the series' final season, filmed in color, but these were horribly time-compressed.) If you're a fan of The Lone Ranger, this is a dream come true. 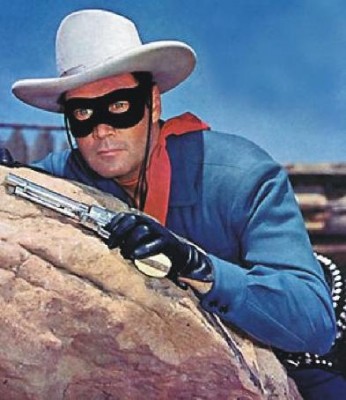 The Lone Ranger began life as a radio series in 1933, out of WXYZ in Detroit. The show was hugely popular (lasting nearly 3,000 episodes), and begat two Republic-produced serials, The Lone Ranger (1938) and The Lone Ranger Rides Again (1939). Typical of that studio's radio and comic book/strip adaptations, it took many liberties with the characters.

The much more faithful TV show, which began airing in September 1949 (1949!) was one of if not the very first shot-on-film TV Western. (Gene Autry, The Cisco Kid, William "Hopalong Cassidy" Boyd, and Roy Rogers would soon follow, but all came after The Lone Ranger's success.) It was part of the exodus among B-feature and serial producers into the burgeoning TV market, and The Lone Ranger TV show plays much like an extended serial chapter, or a B-Western shortened down to 25 minutes. According to star Clayton Moore, the series was budgeted at $12,500 per episode, which sounds about right. These early episodes rely on stock footage for large crowd scenes (often establishing shots), footage of stampeding buffalo and the like, but don't look cheap like some of the later Lone Ranger episodes. Rather, they resemble modest but adequately-financed mini-movies.

Popular as the radio show was, the TV version of The Lone Ranger made the character an American pop culture icon. Star Clayton Moore had been a busy actor in serials and B-Westerns, often playing a henchman of the main villain, and appeared as Jesse James in two Republic serials immediately before this. But the series all but transformed Moore into the Lone Ranger, off-screen as well as on. After the series ended he reprised the character a couple of times (including on an episode of Lassie that's included in this set) and made a living making personal appearances as The Lone Ranger.

Like Santo, the iconic Mexican wrestler, Moore refused to be seen in public without his trademark mask. When the owner of the Lone Ranger character, oilman-TV producer Jack Wrather, successfully sued Clayton Moore over copyright infringement, Moore took to wearing thick, wraparound glasses to hide his face as much as possible. More importantly, the backlash from sympathetic fans who adored Moore was monumental and far-reaching: the lawsuit generated such negative publicity that it all but doomed Wrather's latest product, the big-budget film The Legend of the Lone Ranger (1981). And like Santo, in the intervening years Moore had stopped playing The Lone Ranger - he had become The Lone Ranger. Like William Boyd and his Hopalong Cassidy character, Moore's personal life had been profoundly influenced by the character he played, especially by its impact on children. He himself had taken the Lone Ranger Creed to heart.

As the Lone Ranger, Moore affects a kind of measured, Gary Cooper-esque delivery of singular gravitas. It might have been laughable were it not so utterly sincere. (His line readings got more naturalistic as the series progressed.) It was clearly Moore's way of making The Lone Ranger his own, perhaps suppressing his own screen persona (such as it was in 1949), obscured behind the mask. He clearly was a decent enough actor; as The Lone Ranger he had at least six alter-egos (the Swede, the Old-Timer, the Medicine Man, etc.) to enable him to work undercover at times, and Moore is delight as these characters. (You can see a bit more of Moore, but not much.)

Real-life Canadian Mohawk Jay Silverheels (born Harold J. Smith), as The Lone Ranger's faithful Indian companion, was similarly impressive. Tonto's broken English and devotion to his faithful friend, his ke-mo sah-bee (an inauthentic word lifted from the name of a summer camp) has drawn some criticisms from Native American defamation groups, but like Charlie Chan, Tonto is a resolutely positive character, intelligent and wise, especially in his shrewd handling of racist whites quick to dismiss him. Indeed, many Lone Ranger episodes touch upon racist attitudes toward Native Americans and other non-whites.

The first three shows detail the Lone Ranger's origins, similar to the ill-fated Legend of the Lone Ranger (1981). I suspect but can't confirm these shows were made to be released as a feature if the series hadn't sold. Amusingly, most of the main cast in this trilogy had almost exclusively played villains in serials and B-Westerns: besides Moore, Tristram Coffin plays Captain Reid, the Lone Ranger's brother shot dead by outlaw Butch Cavendish (Glenn Strange). Early episodes are narrated by Gerald Mohr, yet another longtime serial and B-feature villain.

The discs are contained in three attractively-designed but awkward fold-out paper jackets, one containing discs 1-6, a second with discs 7-12, and a smaller one with the 13th (bonus) DVD. My discs had slipped deep into the packaging, and getting them out undamaged was no easy task. (The bonus disc fold-out includes very nice paintings of The Lone Ranger and Tonto standing a good 18 inches high.)

Menu screens predictably blare The William Tell Overture, The Lone Ranger's signature theme (so much so even classical music aficionados have a hard time listening to it without thinking of The Lone Ranger). What's unfortunate is that this music is heard over the very same opening titles as featured in every episode, and it's not skippable, meaning every time you want to watch an episode, you'll have to sit through this opening at least twice.

Most episodes run about 25 minutes, making them more or less complete, but they feature what would appear to be an opening created for some television syndication version (including footage from the opening to the color episodes, printed here in black and white), or a new version for home video release. From the title of the episode onward, however, it's clear these are the original shows, which generally look pristine, as good as the currently available Hopalong Cassidy episodes, but not as good as the restored Gene Autry Show. (Oddly, second season shows don't seem to fare as well as the earlier ones.) Many shows include the original "bumpers," here an empty wheat field at which point the program would cut to a commercial by sponsor General Mills.

However, a few shows appear to be incomplete, or are at least time-compressed. There had been some talk around the Internet concerning episodes cut down to as little as 11-12 minutes, but that report proved erroneous. Some episodes are complete, with running times of about 25 1/2 minutes, but others are barely 22 minutes, much too short for a '40s / early-'50s half-hour show, and there's either an abrupt fade-out/fade-in to explain this some of the time, or indications of some time-compression here and there, though it's pretty imperceptible, certainly not nearly as obvious as the Rhino set, in which Silver seemed to gallop at about 75 mph. Episodes are not closed captioned or subtitled, and have no alternate audio options.

Supplements include "Peace Patrol," a 1959 episode of Lassie featuring Moore (and Silver) in his last official Lone Ranger portrayal, not counting the smattering of TV commercials he did in character later on. It's a typically saccharin episode; I hadn't seen an episode in at least 30 years yet it was engrained in my memory like a dirty wad of gum stuck to the heel of one's shoe. Also included are three episodes from the undistinguished, Wild, Wild West-influenced cartoon show from 1966*, and a 1950 episode of the radio series.

Dig deeper into the box and it's there where the cost of this 75th Anniversary Collector's Edition becomes justified. For starters, there's a beautifully-designed full-color, 88-page booklet, crammed with wonderful illustrative material, including artwork, photos from the TV series, pages from radio scripts, strip and comic book excerpts, everything imaginable, including a fold-out "Lone Ranger Chronology." Much of the text is excerpted from an October 1939 Saturday Evening Post article which, necessarily, focuses on the radio series, though peppered throughout are bits and pieces of trivia and other information about the television series.

Also included is a 14-page episode guide. It's a little short on information, including only the original airdates, titles, and synopses, but it's still a helpful guide.

A vinyl-like envelope houses even more treasures, gorgeous reproductions: a Lone Ranger Victory Corps membership card, urging children to purchase one U.S. Defense Savings Stamp each week; an official envelope and letter confirming membership into the Lone Ranger Victory Corps ("Put 'er there, Pardner!"); a postcard invitation to join the Lone Ranger Safety Club (sponsored by Merita Bread and Cakes) from 1938; a set of Lone Ranger Color Picture Trading Cards in their original packaging, with five sets of three cards (from the episodes "Danger Ahead" and "Thieve's Money" [sic], at least that's what was in mine); The Legend of the Lone Ranger, a complete (if reduced in size) 14-page comic book about the Lone Ranger's origins, published in 1969; and last but hardly least, a 5x7 black & white glossy photograph of The Lone Ranger and Silver, with a reproduced autograph reading, "Clayton Moore, The Lone Ranger." How neat is that?

The Lone Ranger - 75th Anniversary Collector's Edition falls short here and there, especially in the cut and/or time-compressed shows. While there's no excuse for cutting or time-compressing shows when complete film and sound elements exist, in the big picture it's one legitimate complaint in an overall package of pristine-looking episodes, in a box crammed with nostalgic memorabilia. While not perfect, its achievements greatly outnumber its shortcomings. A DVD Talk Collector Series title.

* Sergei Hasenecz counters, "While the cartoon show was clearly influenced by Wild, Wild West, and had the usual limited animation of TV cartoon shows of the time, I will argue that graphically, at least, the show did make attempts to distinguish itself. There was a darker than usual quality to the graphics. The animators were unafraid of using black and setting a somewhat grimmer mood than any other cartoon show of the time. The graphics were also unusually stylized, seeming almost rough-hewn, as if to suggest the ruggedness of the frontier west. (At least, that's how I remember it.) Tonto was also given a solo adventure in most shows, his being the middle segment of three cartoon adventures."