Edition Filmmuseum // Unrated // Region 0 // PAL
List Price: €22.99 [Buy now and save at Amazon]
Review by Chris Neilson | posted February 24, 2009 | E-mail the Author
Anders als du und ich (Different from You and Me) is a German-language exploitation film released in 1957, capitalizing on homophobic hysteria. Directed by the discredited ex-Nazi Veit Harlan, infamous for the vile anti-semitic propaganda film Jud Süß (1940), Anders als du und ich is the story of a bourgeoisie couple trying to save their adolescent son from homosexuality. 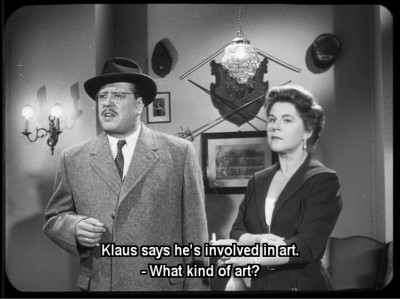 Bank Manager Werner Teichmann (Paul Dahlke) and his wife Christa (Paula Wessely) are concerned about their seventeen-year-old son Klaus (Christian Wolff), a bright boy interested in modern painting. Klaus's affection for effete classmate Manfred Glatz (Guenther Theil) disturbs his parents, but things come to a head when they learn that Klaus has been targeted for despoiling by the fifty-year-old Dr. Boris Winkler (Friedrich Joloff), a rich, old queen with a stable of young men in his mansion who stand about discussing electronic music and modern art before stripping to their skivvies for a bit of Greco-Roman wrestling.

Enlightened bourgeoisie that they are, the Teichmanns consult medical experts about their son's condition from whom they learn that homosexuality is a psychosexual disorder that manifests itself in adolescence when budding, healthy heterosexual desire is inverted. If caught at an early stage, the psychological condition can be reversed through a positive heterosexual encounter, but once the adolescent sufferer engages in homosexual sex the condition is essentially irreversible.

To save her son, Mrs. Teichmann solicits the comely twenty-year-old live-in maid, Gerda (Ingrid Stenn), to seduce Klaus. Having secured Gerda's agreement, the Teichmanns decamp for a vacation leaving Klaus in Gerda's capable hands. The plan works flawlessly when on the first night alone together in the house Gerda deflowers Klaus. With his homosexuality now cured by vaginal intercourse, Klaus breaks off his friendship with Manfred and distances himself from Dr. Winkler.

Unfortunately for poor Mrs. Teichmann, Dr. Winkler suspects something criminal has happened to break his spell over young Klaus. He lodges a complaint with the cops who deduce that Mrs. Teichmann solicited Gerda on behalf of her son. Mrs. Teichmann is brought to trial and is sentenced to a six-month term. Though a small sacrifice to make to save her son from a life of sexual perversion, the German film censors thought it too harsh, so the sentence is suspended via a quick redub, leaving the characters looking absurdly anguished about a proverbial slap on the wrist.

If Viet Harlan was ever a competent director, it doesn't show here. Using one tedious medium shot after another, bad camera angles that reveal the heights of the tall sound stage walls, cross-cuts that don't match up, horrible scene transitions, ridiculous choreography and the worst lighting I've ever seen, Viet Harlan makes Ed Wood look like Alfred Hitchcock. To cite but one particular, the one long dolly shot in Anders als du und ich aptly demonstrates the incompetence of Harlan and his cinematographer. Not only is the boom mic frequently casting a long shadow behind the actors, but the cameraman has no idea when the characters will stop and start walking. Consequently, the camera's jerky movements to try to keep the characters center framed are laughably inept.

The script and story editing are just as problematic as the production with the film beginning with the trial of Mrs. Teichmann before dissolving into past events during her testimony. From the very first words of Mrs. Teichmann's testimony, this methodology is flawed because she's testifying to, and hence recreating for the audience, things to which she was not a witness. Worse yet, the recollection itself devolves into a series of dreams within the heads of the people she's testifying about. 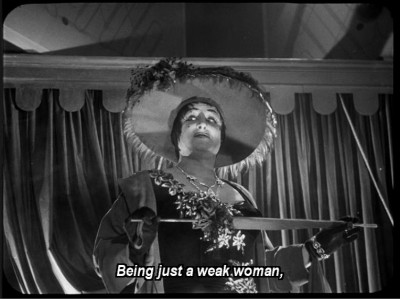 Presentation
Anders als du und ich has been released by Edition Filmmuseum, a label founded by six German-language national archives and the Goethe-Institut, on a single dual-layered DVD which is PAL-encoded but not region restricted.

Video:
Filmed in 1.37:1 black and white, Anders als du und ich shows its age and low-budget roots with a image that suffers from print damage and mild digital combing.

Audio:
The German-language monoaural audio track is of acceptable quality given the limits of the source material though ADR and lips frequently don't match.

Extras:
Anders als du und ich was originally submitted to the German film censors in 1957 under the title Das dritte Geschlecht (The Third Sex), but this title together with some of the material from the original cut was changed because it purportedly portrayed homosexuality in too favorable of light. Edition Filmmuseum provides 40-minutes of comparisons between scenes as recorded for Das dritte Geschlecht and as released as Anders als du und ich. Having seen the comparisons myself I find that the German censors concerns were as much about presenting the German justice system in a favorable light and toning down the nudity and sexual situations as they were that homosexuality not appear to be condoned.

Additional extras consist of German-language DVD-ROM film materials, a gallery of stills and lobby cards, and a four-page German and English booklet in which the most enthusiastic endorsement of the film that underground-film aficionado Harald Gruenberger can muster is that "Anders als du und ich remains a curiosity piece of the highest order, if only for a child psychologist's advising the hero's mother to let him fuck a girl and explaining: 'This is, so to speak, a homeopathic advice'."

Final Thoughts:
If you enjoy films so earnestly rotten that you wonder whether it isn't all some elaborate joke, Anders als du und ich is for you.