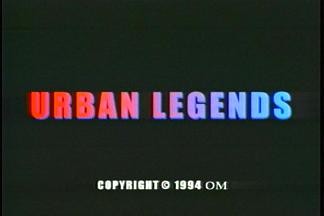 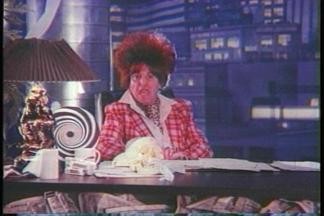 I've been reviewing movies for more than a decade, and I've been with DVD Talk for over a year. In my time in this role, I've been sent some toxic material to review. But nothing - and I do mean nothing - prepared me for the home video monstrosity titled Urban Legends from MVD Visual that DVD Talk should have wrapped in yellow police-style "Do not enter" tape when they mailed it to me.

Yes, this DVD is that bad.

And this is coming from the same magnanimous reviewer who generously gave a half-star to such crap as Boardinghouse and the thoroughly shameful Dungeon Girl. I honestly thought I would never be forced to give a zero-star rating for a disc - and yet out of nowhere comes Urban Legends to prove me wrong.

So, the cover art would have you believe that this is going to be some kind of low budget look at urban legends. The front cover features a fog-drenched man carrying a shovel and the back art promises "7 tales of horror and dread." It doesn't look promising, granted, and seeing the quoted tagline above about this being "a midnight mess-terpiece" should clue the potential victims who might pick up this disc to be wary. Well, that and the descriptions of the stories themselves: take Broken Needle in Arm, for instance, with the description "needle breaks off in patient's arm . . . it could happen to you!"

It reminded me a little of local movie host stuff from the 1980s - except without the wit and humor. And, none of it really seems to mesh together at all with any true coherency. What exactly are we supposed to be watching? A semi-random montage of obscure footage?

Cobbling all of this stuff together is our host, Rusty DeFage (a wig-wearing Dino Lee - and the name pun should clue you in on the level of supposed humor operating here), who "hosts" these segments with continual canned laughter, and comments, Mystery Science Theater 3000-style, on the proceedings as they occur. He's not funny either, and much of his host comments are poorly captured by the microphone and nearly drowned out by the laughter that seems to have been captured from some kind of stand-up program (several shots of a 1980s-looking audience laughing at a comedy club or something are spliced in early in the movie).

Thoroughly unfunny and painful to watch (I seriously felt bad for the folks immortalized in this dreck), Urban Legends is one "mess-terpiece" best left untouched. Skip it. 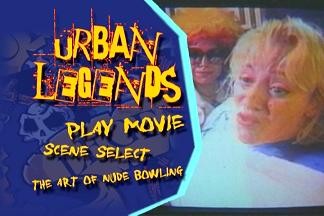 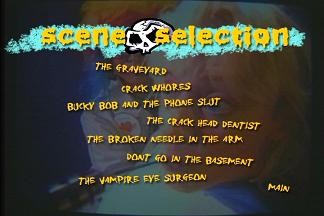 MVD Visual presents Urban Legends in a full frame format that I'm sure represents its correct aspect ratio. As if it matters. This is one rough-looking film, with visual quality ranging from approximately EP-level VHS to about SP-level VHS. I wonder about the origins of this movie and suspect that at least parts of it may have been culled from some kind of local access cable fare from the days of old(?).

The lone audio track is Dolby Digital 2.0. Like the video quality, the sound quality is quite limited here due to the production values. Dialogue is often hard to make out, especially Rusty's comments. The volume veers up and down fairly precipitously as the feature roams around its different shorts as well.

The lone extra is a painfully unfunny short titled The Art of Nude Bowling, which shows several nude bowlers in a fake "aged" 1920s serial that purportedly was filmed by Alfred Hitchcock and has a faux running commentary track.

Just think, the disc has a malignant extra equal to the malignant feature.

Please, if there is something in this review that makes you say "hmm, maybe I should check this out," don't. Urban Legends is toxic contamination and should be avoided at all costs.