Raw For Life: The Ultimate Encyclopedia of the Raw Food Lifestyle

Other // Unrated // October 16, 2007 // Region 0
List Price: $29.95 [Buy now and save at Amazon]
Review by Chris Neilson | posted March 3, 2009 | E-mail the Author
Disparaged as a fad by some and embraced as a healthy environmentally-friendly lifestyle by others, raw veganism is an increasing popular diet throughout the first world. Raw vegans avoid meat, diary, breads and cooked foods of all kinds. The makers of Raw for Life, a two-disc DVD set, promote and capitalize on this diet by assembling thirty advocates of raw veganism to share their insights.

The assembled advocates include medical doctors, nutritionists, vegan chefs and restaurateurs, motivational speakers, new age spiritualists, athletes, actors, filmmakers, and other media personalities. Nearly everybody sings the praises of raw veganism while soft-pedaling themselves and their products.

Raw for Life uses no narrator or host, relying instead on good editing. Production values rival that of the best television infomercial, though the music was too loud and too ordinary.

Presentation
Raw for Life includes two discs in a cardboard case with the dimensions of a CD-case.

Video:
Raw for Life is presented in full-screen (1.33:1 aspect ratio), though some of the segments are letterboxed. Video quality is good for a production of this kind through inconsistent between segments, especially with regard to color.

Audio:
Although there is no notable separation between channels, the 2.0 audio sounds acceptable with sound levels consistent across all the segments.

There are no subtitle options available.

Extras:
Though it's arbitrary on my part to call anything on this release an extra rather than a main feature, the bits included beyond those identified above include sixteen cooking videos of chefs preparing raw dishes, a five-minute trailer for Simply Raw: Reversing Diabetes in 30 Days, and a photo gallery with promotional blurbs and website addresses for all the advocates appearing. 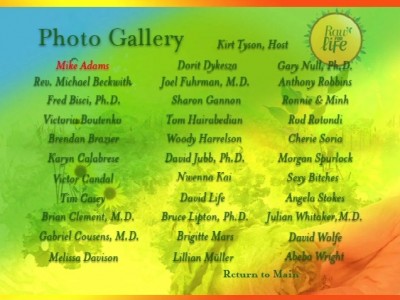 Final Thoughts:
Raw for Life, a two-disc DVD set promoting a raw diet, has the look and feel of a long-form infomercial, but with thirty expert participants each promoting a different book, movie, restaurant, or website, the pitches are diluted enough to sustain a viewer through the whole set.

There's nothing here that isn't done better in a diet book or cook book, but some viewers will enjoy the opportunity to see raw veganism promoted in this format.