Blue Underground // Unrated // March 31, 2009
List Price: $34.95 [Buy now and save at Amazon]
Review by Stuart Galbraith IV | posted March 15, 2009 | E-mail the Author
Essentially two short features spliced together into a two-hour portmanteau horror film, Two Evil Eyes (Due occhi diabolici, 1990) differs from the popular Amicus horror omnibuses of the 1960s and '70s in that there's nothing linking the two tales together, other than the fact that they're both based on famous Edgar Allan Poe stories. The longish, arguably overlong first story ends and the second one simply begins. As often happens with such productions, many different ideas and directors were discussed for the ambitious project, but in the end George Romero (Night of the Living Dead, Knightriders) directed the first story, "The Facts in the Case of Mr. Valdemar," while Dario Argento (The Bird with the Crystal Plumage, Suspiria) helmed the second, a loose adaptation of "The Black Cat."

An Italian-U.S. production apparently filmed entirely in Romero's native Pittsburgh with postproduction completed in Argento's Rome, Two Evil Eyes disappointed critics and audiences when it was new, and it was barely released in American - but today it plays fairly impressively, with each segment having much to offer. The Romero half was singled out for scorn by some critics, but its methodical pace worked on this reviewer. Argento's segment is visually stylish but its characters are murkily defined, though the sum of its parts makes it worthwhile by the end, which in addition has several clever twists. Blue Underground's Blu-ray disc is a 1080p, 50GB transfer that's just about flawless and a huge improvement over the DVD, with the latest audio mixing and some good extras are carried-over from the standard-def release. 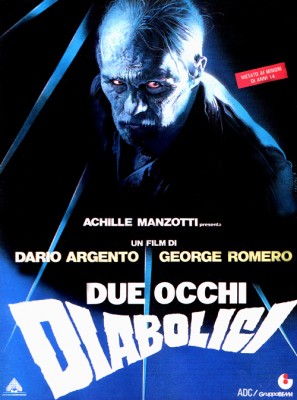 Each segment runs almost exactly an hour. Oddly, the film has no opening title card at all (there's no "Two Evil Eyes" anywhere in fact, which appears to have been a mistake; at one point the film goes to black where perhaps the title should have gone) and after a brief, awkwardly inserted montage featuring Edgar Allan Poe's museum-home, a statue and gravesite in Baltimore, "The Facts in the Case of Mr. Valdemar" commences. Adrienne Barbeau stars as Jessica, a former flight attendant married to the much older, wealthy Ernest Valdemar (Bingo O'Malley). She's let him use her as a trophy wife for years, and now that he's dying she makes no bones about expecting compensation for her services.

When Valdemar expires before the estate can be settled in her name, Jessica conspires with her former lover, Dr. Robert Hoffman (Ramy Zada), also Valdemar's physician/hypnotherapist, to hide the body in the basement freezer until the legal paperwork being prepared by Steven Pike (E.G. Marshall) can be finalized. ("Bad timing," Pike warns, "The prices of some of the stocks are the lowest they've been in years!") But then Jessica hears a pained voice coming from the cellar - Valdemar's trapped soul still exists though his body is physically dead: to control Valdemar's agonizing pain, Hoffman had him under hypnosis at the moment of death, and now his soul is trapped in a cold, dark void of nothingness with other undead souls eager to escape back into the world of the living ...through Valdemar's body!

Later, in "The Black Cat," Harvey Keitel stars as Rod Usher (get it?), a disturbed, alcoholic crime scene photographer with artistic pretensions - he wears a beret and with his photographic gear looks like nudie film icon Lucky Pierre. Annabel (Madeleine Potter), a girlfriend who shares his inexplicably vast historic home, adopts a stray black cat which takes an instant dislike to the melancholy Usher. He kills the pussy, photographing while simultaneously choking it to death. Those images, along with grisly crime scene photos (including a woman cut in half by a giant pendulum in some Inquisition-era-looking dungeon - in Pittsburgh?!), are published in a book and Annabel's suspicions that her missing cat was actually killed by her boyfriend are confirmed. There's a struggle, and Usher kills her with a meat clever, later walling up her corpse behind some shelving. (On the shelves are VHS videotapes of movies as varied as The Searchers, The Final Conflict, and The Awful Truth.) As in Poe's story, Annabel's cat indirectly proves Usher's undoing when police come a-calling.

"Valdemar" builds slowly, deliberately, but its pacing is most welcome in an age where too many modern films of this type impatiently overload the viewer with non-stop visceral shocks. The slower pace allows for some surprisingly rich character development. Fans will remember Barbeau as the completely unsympathetic, banshee wife of milquetoast Fritz Weaver in Romero's Creepshow. Here, she's almost sympathetic, and her regret about conspiring with lover Hoffman and growing fear and anxiety about her husband's suffering (she expresses more empathy after he's dead than when he was alive) is very interesting. Similarly, Hoffman becomes less concerned about getting rich once aware of Valdemar's undead state, becoming fascinated with the dead old man's consciousness, obsessively tape recording their conversations.

"The Black Cat" sacrifices carefully defined characters for visual stylishness and flashes of all-out weirdness, including a mostly ineffective but elaborate dream sequence that seems inspired by Witchfinder General and The Wicker Man. The main problem is that the script struggles to define the Usher character, and Keitel's performance, while good, hints that he's moving in a different direction with the character altogether. Usher's obsession with grotesque images of mutilated bodies is promising but never explored on any level, while his relationship with pale-skinned Annabel is nothing more than a one-way street of abuse. Even Usher's relationship with the cat makes little sense, the feline seemingly ready to claw Usher's eyes out from the get-go. More than Romero, Argento seems constrained by the overall picture's format and having to adapt Poe and the American setting to his singularly European style.

Conversely, "The Black Cat" has many fine components that, taken together, make for a moderately satisfying show. Besides Keitel's performance, Kim Hunter and Martin Balsam make brief but welcome appearances as old neighbors living across the street, while John Amos is fun as a veteran police detective. Argento directs in his usual imaginative style, with cat point-of-view shots, weird and voyeuristic angles including one from beneath a bathtub drain. The audacious ending is a lot of fun, if not entirely logical.

This unrated edition features typically, extravagantly grisly special makeup effects by Tom Savini, who briefly appears in the film as a lunatic, and is billed as one of the stuntmen to boot.

Two Evil Eyes is presented in a very nice 1.78:1 transfer that's bright and sharp; only the title elements and other opticals, which are a bit soft and grainy, disappoint. Overall, the film looks great, almost brand-new, and the advantages of the 1080p picture abound - in details now visible in the spfx make-up; the delicate color pallet, the subtleties of the actors' performances. The audio here is English-only; there's no Italian track, though considering the entire film was shot in English, there's not much point in one. (Reportedly this was Argento's first film shot with live sound.) Originally released in standard Dolby Stereo, included here are three audio options: 7.1 DTS-HD, 7.1 Dolby TrueHD, and 5.1 Dolby Digital Surround EX. Viewers watching the film on conventional monitors may notice a lot of echo when the audio favors the surround channels. Optional subtitles in English SDH, French, and Spanish are also included.

The supplements, all in 480i standard definition and not subtitled, are from the April 2003 standard DVD edition. They include Two Masters' Eyes, a good half-hour interview with Romero and Argento, and featuring Tom Savini, executive producer Claudio Argento and, briefly, Dario's daughter, Asia Argento; Savini's EFX and At Home with Tom Savini, a tour of the make-up artist & monster movie fan's artifact-filled home; a theatrical trailer; and Adrienne Barbeau on George Romero, a brief, unused interview conducted for the documentary Document of the Dead in 1989.

Though neither segment is up to the level of either director's best work, Two Evil Eyes is still a reasonably diverting horror film with an adequate quotient of chills, and Blue Underground's excellent transfer and strong extras make this a very worthy acquisition. Highly Recommended.