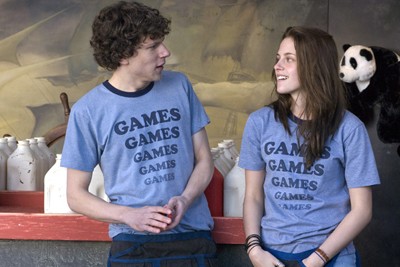 Just when you think you have a guy figured out...

It would have been easy to typecast Greg Mottola post-Superbad as a director of teen sex comedies, and based on the trailers, you'd be forgiven to jumping to that conclusion regarding his new film, Adventureland. Sure, the kids are in their early 20s this time around, but even in the first twenty minutes or so, Adventureland looks like Michael Cera's Superbad character has just grown up a little, graduated with a bachelor's degree, but still hasn't managed to go all the way with a girl. And it's not like it would have been a bad thing had that been the case, because I love Superbad, but the surprise of Adventureland is how much more adventure it has in mind.

Adventureland is actually a semi-autobiographical film, written by Mottola about his own gig at a rundown amusement park in the summer of 1987. The director's stand-in, what could have been the Michael Cera role, is taken over by Jesse Eisenberg from The Squid and the Whale--and right there, the Superbad comparisons dissolve. James is not Evan four years later, he's an older Walt Berkman exiled to the suburbs. It's like Noah Baumbach lost his summer internship and has to crash on Judd Apatow's couch to get back on track.

James is all set to spend his post-undergrad/pre-graduate student summer lollygagging around Europe when the effects of Reaganomics hit too close to home. His father (an appropriately shattered Jack Gilpin) has been demoted and now James is going to have to figure out how to pay to live in New York and attend Columbia on his own. Having had no prior job experience and carrying a B.A. in comparative literature, the wannabe journalist ends up stuck working the scam games at the local amusement park, Adventureland. There, the sheltered boy meets the legion of disaffected like himself who also have nowhere else to go. Sure, amongst their ranks are the perpetual losers, like James' childhood nemesis Frigo (Matt Bush), but there is also Joel (Martin Starr), the pipe-smoking Russian-lit enthusiast, and the intense, rebellious Emily (Kristen Stewart). A cut above in rank is the too-cool rockstar, Connell (Ryan Reynolds), biding his time as Adventureland's maintenance man until he can move his musical career to Los Angeles. And, of course, there are the bosses, the slightly creepy and oddly square Bobby and Paulette (two of SNL's best cast members, Bill Hader and the adorable Kristen Wiig). They aren't really parental figures, more like that tragically uncool aunt and uncle who always want to be involved in your business.

It is amongst these people that James will get his first taste of the real world. A devotee of Dickens' travelogues because the writer visited prisons and insane asylums, the pretentious college boy is going to realize that life is one big prison and insane asylum itself--but only if you let it be. A romance with Emily has unforeseen complications, since Connell is cheating on his wife with the youngster, but so too does James find distraction in the theme park's resident hottie, Lisa P. (Margarita Levieva). The summer world of Adventureland is like one giant pause, a period of figuring things out, of realizing that most parents don't have a clue (actually, James' college pal tells him that in the second scene) and it's not because they are parents, but because no one has a clue. Least of all James. 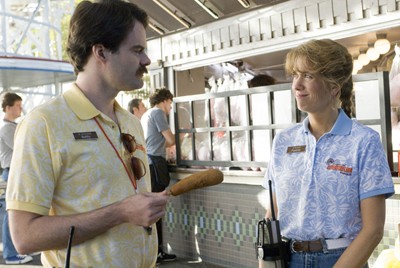 Most filmmakers tend to treat the 1980s as an alien world built out of kitsch and spandex, but Greg Mottola thankfully keeps that almost entirely at bay. Maybe it speaks to the reality of what he really went through, maybe it's a reluctance to fall back on faux nostalgia, but outside of a running gag about Falco and one appearance by Ronald Reagan on a television set, there aren't a lot of signals that this is even a period piece. Loser twentysomethings, just like loser teens, are timeless. Honestly, I was in high school in 1987, and I used to hang out with a lot of these kids. The soundtrack tells us where the characters are coming from in the way a truly awesome soundtrack--and this one is truly awesome--should. The Replacements, the Velvet Underground, David Bowie, early Crowded House and Jesus and Mary Chain--is that mixed tape James gave to Emily stolen out of my closet?

The comparison to Noah Baumbach above was not a convenient toss-off just because this film's star was the star of The Squid and the Whale. Greg Mottola's main point of critique here is not the cretins that make suburban life so difficult for so many, but the ones that are too smart for their own good, who let the cretins get the better of them, and end up not living their lives to the fullest as a result. These are the people that Baumbach, and Whit Stillman before him, satirize, the ones who are too busy telling everyone how intelligent they are to see what is passing them by. This leads to erudite humor full of jokes about Nikolai Gogol and the grammatical errors in graffiti.

What adds a whole new twist to Adventureland is that the smarty-pants stuff is put right up against more lowbrow funny business so they can duke it out like some kind of West Side Story for comedy styles. So, a Brian Eno reference is immediately followed by a guy peeing on a window. Vomit, nut punches, and disco dancing can actually be complementary to ivy league wordplay and nebbishy navel gazing. Hell, there is even room for a Foreigner cover band! It's a fabulous balance--chuckle at the dry humor of Jesse Eisenberg saying things no one else understands, guffaw at Bill Hader losing his temper and going ballistic. Either way, you're going to laugh.

I think we are in a pretty great period for cinematic comedy in America. Movies like Forgetting Sarah Marshall, Role Models, Knocked Up, and last week's I Love You, Man have made it okay to get our yucks out, to be adult about it and not pander to the tween dollar, and to maintain an underlying humanity so that the audience can feel something for the people they are laughing with. While Adventureland may not be the gutbuster some of those other films were, it's got way more of the human element. That's because growing up and growing in love is the greatest adventure of all.