Magnificent Gladiator (plus Revolt of the Barbarians)

Retromedia Entertainment // Unrated // March 31, 2009 // Region 0
List Price: $14.98 [Buy now and save at Amazon]
Review by Stuart Galbraith IV | posted April 3, 2009 | E-mail the Author
Retromedia's latest peplum offering, Magnificent Gladiator...plus Revolt of the Barbaians is a fairly lackluster offering of two films released at the tail end of the prolific Italian sword & sandal genre. The Magnificent Gladiator is 16:9 enhanced widescreen, which is a plus, but the film is overrun with cliches and is deadly dull; Revolt of the Barbarians is a much more interesting movie with greater spectacle but it's culled from a worn and very noisy 16mm television print that's panned-and-scanned. In the end, these "3 hours of Gut-Crunching Excitement" as the back cover tells it, are for die-hard fans only. All others beware.

Significantly, both films were originally released in late-December 1964; Revolt of the Barbarians premiered in Italy on December 18th, while The Magnificent Gladiator (Il Magnifico gladiatore) opened 13 days later, on New Year's Eve. What killed the peplum genre off was the birth of the Spaghetti/Macaroni Western that same year; just as everyone in the Italian film industry cranked out dozens upon dozens of peplum when that genre found an international audience, these same filmmakers dropped their swords and togas in favor of Colt .45s and gun belts the minute Fistful of Dollars (Per un pugno di dollari) - which opened in Rome on October 16th, just two months prior to these titles - was declared a smashing success. A few more peplum would trickle out of Italy, but the faucet was pretty much clamped shut by mid-1965. Mark Forest, the star of The Magnificent Gladiator, had appeared in 11 peplum before this but none after; director Alfonso Brescia did several peplum in 1964-65, but was making pictures with titles like The Colt is My Law and Killer Caliber .32 after that.

The Magnificent Gladiator is a pretty good indicator why the genre collapsed so abruptly and European Westerns were embraced as a breath of fresh air. Though I consider myself a fan of peplum (and Euro-Westerns), I was so bored by this it took me four evenings to get through its not-long but unendurable 95-minute running time. I'd either fall asleep on the sofa or simply goes nuts with boredom by the non-action happening onscreen.

It's also one of numerous faux-Hercules movies. In this English-dubbed version, Forest's character is called Hercules, but in the original version he was the merely muscular Attalus, Prince of Dacio. Captured by the Romans, Attalus/Hercules becomes a gladiator, fights some Huns, and falls in love with Velida (gorgeous Marilù Tolo), daughter of Emperor Galienus (Franco Cobianchi, who resembles Bob Dishy). Greedy Zullo (Paolo Gozlino, who looks like Patrick O'Neal) lusts after Velida while conspiring to steal the throne and its riches through Galienus' daughter.

In battle Zullo captures a two-bit actor with an uncanny resemblance to Galienus (and so he should; he's also played by Cobianchi). Zullo imprisons the real emperor while putting the puppet impersonator in his place. Among the imposter's first commands: imprisoning Attalus/Hercules while ordering Velida to marry Zullo.

The Magnificent Gladiator is overwhelmed by its genre cliches, from the scheming Zullo and his predictably double-crossed lackeys to its secondary leading man and second-tier ingénue, routine battle scenes, etc. Another convention of these pictures is the comedy relief; for some reason in Italian films these parts are often played by dwarfs. Here though, the comedy relief is provided by sheep-rustler Drusius, played by nebbish comedian Oreste Lionello, who passed away only a few weeks ago. In the English version his dubber opted to give him a nasally New Jersey accent similar to Jerry Lewis (or maybe Sammy Petrillo); in Italy for many years Lionello dubbed the voices of Woody Allen, Robin Williams and other American comedians so maybe he was in no position to complain. 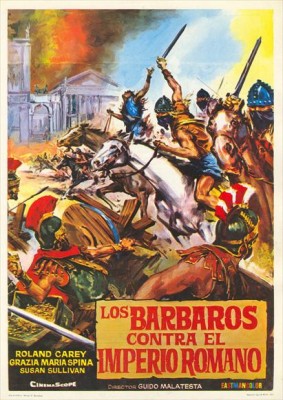 Somewhat better is Revolt of the Barbarians (La Rivolta dei barbari). Directed by Guido Malatesta (Goliath and the Giants, Operation Apocalypse), this one stars Irish-French actor Roland Carey (of dual Swiss-French nationality) - who had smaller muscles but more talent than the usual imported leading man. He worked in America for a while but only landed bit parts; conversely, he gained some measure of fame in Italy in a couple of genre films, notably The Giants of Thessaly (1960) and Sword of El Cid (1963). He continues to act, apparently, turning up more recently as the drug dealer in Krzysztof Kieslowski's Red (1994).

In Revolt of the Barbarians, Carey plays respected roman officer Darius, Commander of the 10th Legion, who in 300 A.D. is dispatched to Gaul to investigate the theft of Roman gold payroll shipments, robberies blamed on freedom-fighting barbarians. He goes undercover as a Spanish merchant where he meets anti-Roman ingénue Livia/Lydia (Maria Grazia Spina, who resembles Tina Louise), whose father was murdered by Romans. She now lives with her mysterious aunt, Augusta. Later, it appears that Brutus, captain of the Praetorian guards, is secretly behind the robberies, but could a larger conspiracy be at play?

The film has less pec-flexing and more mystery and intrigue, while avoiding many of the by-now tired cliches of the genre. There's also a lot of spectacle: a big battle scene at the beginning and several later on with lots of thundering horses and clashing swords, featuring several hundred extras. All this may be stock footage from another film, but it's hard to tell for sure because the print is so murky and worn, but even if it is stock it's integrated reasonably well. Also impressive is that for exteriors the cast wanders about humungous open sets of ancient Rome, almost certainly originally built either in Rome for Cleopatra or in Spain for The Fall of the Roman Empire.

(Note: A "Susan Sullivan" is listed in the cast, but this doesn't seem to be the same longtime actress now appearing in the TV series Castle.)

The region-free, single-sided disc is something of an improvement compared to Retromedia's earlier transfers, which tended to be ridden with artifacting and in some cases wouldn't play at all on certain DVD players. Generally speaking, these are decent transfers of mediocre prints. The Magnificent Gladiator is 16:9 enhanced and looks okay, though for no good reason Retromedia has opted to "enhance" the audio, crudely sweetening it with added sound effects during the battle scenes, clanking swords and the like. Filmed in Techniscope, this version of the film appears complete, with the same running time as the Italian version. I have no idea where this print/transfer comes from; a new title card has been added via video supering.

Revolt of the Barbarians is a good transfer of a bad 16mm television print, panned-and-scanned and probably dating back to the late-1960s. The original film reportedly runs 99 minutes, but this version is a brisk 77 minutes long. Like Magnificent Gladiator, it's hard to say exactly where this beat-up print came from; like Magnificent Gladiator, it has a new title card supered in place of the old one. (There's also an inept, unintentionally funny copyright notice I think turns up on several other Retromedia titles: "© MVIII by Retromedia Entertainment." Someone ought to tell Fred Olen Ray that MVIII is the year 1008, not 2008.) This print has the usual problems: off-balance compositions on account of the panning-and-scanning, dirt and splices, titles inexplicably slanted at about 5%. But the worst offender is the English-dubbed audio, which has so much loud crackling it sounds like somebody's madly popping Jiffy Pop popcorn just behind the screen.

As with their earlier release of Samson and the 7 Miracles of the World/Ali Baba and the Seven Saracens, this includes six "Super Muscle Trailers": Hercules Against the Sons of the Sun (Ercole contro I figli del sole, 1964); Ursus and the Tatar Princess (Ursus e la ragazza tartara, 1962), also featuring Yoko Tani; Ali Baba and the 7 Saracens (on the audio; onscreen it's Sinbad contro I sette saraceni); The Magnificent Gladiator (Il Magnifico gladiatore, 1964); and Julius Caesar Against the Pirates (Giulio Cesare contro I pirate, 1964).

The 16:9 enhanced transfer of Magnificent Gladiator compensates a bit for its lackluster story, while Revolt of the Barbarians deserves a much better presentation that it gets. If you're a tolerant fan of Italian sword and sandal films you might want to Rent It, but others will want to pass.