If one man's trash is another man's treasure, then so too can one man's feast be merely a unfulfilling snack for another. Likewise, what may be a biting and shocking satire to you might turn out to induce merely a shrug from me.

Such is the case with Marco Ferreri's 1973 film La Grande Bouffe (The Big Feast), a semi-notorious shockfest that plays like a cross between Bunuel's The Discreet Charm of the Bourgeoisie and Pasolini's Salo. The latter comparison is even made on the DVD box, in a quote from our very own DVD Talk, no less. Again, one reviewer's shocking and disturbing is another reviewer's interesting but underwhelming.

La Grande Bouffe (also known as Blow-Out) is the story of four friends who are gathering for a culinary orgy, a weekend where they plan to eat until they quite literally die. Trucks of food are brought in to fill their decadent menu, and the men have come together in secret, revealing neither their true goals nor their destination to anyone. They number among them a chef (Ugo Tognazzi), an airline pilot (Marcello Mastroianni), a television presenter (Michel Piccoli), and a high-court judge (Philippe Noiret), each actor lending their own names to their characters. Though they originally agreed on solitude, Marcello's other cravings demand service, and he hires three prostitutes to undertake this marathon with them. Also enlisted is the local schoolteacher (Andréa Ferreol), a voluptuous woman whose appetites prove to shame that of the hosts themselves. Long after the other girls have gone, she stays and has sex with each diner in turn, despite having accepted Philippe's offer of marriage, and she not only keeps eating, but she even manages to profess to being hungry.

Make of that what you will, because I'm not quite sure what to make of La Grande Bouffe myself. The question that hangs over the whole thing for me is, "Why?" There is very little explained here. The fact that the men intend to die is only briefly touched on, and there is no philosophical or moral explanation as to their reasoning for such an undertaking. Faint social distinctions can be made in terms of each man's position in society--two working men of different stripes, a semi-intellectual entertainer, a political figure--and they each flaunt social conventions and violate personal morality with equal abandon, but what is the point, really? The randy fun of watching overgrown frat boys party hearty? Because that far outweighs whatever else Marco Ferreri and the other writers have put into the script. 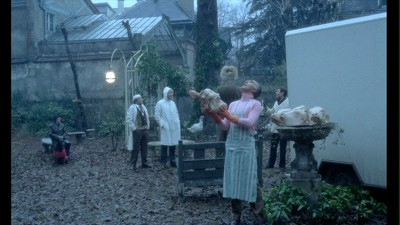 I'm a little surprised to see that La Grande Bouffe has an NC-17 rating. Maybe if we adjust the ratings for inflation the way we do box office receipts so a once successful film can compete financially with modern-day ticket gouging, maybe then La Grande Bouffe is scandalous enough to make the puritanical shriek in terror. Speaking as someone who covered his eyes multiple times while watching Salo, I didn't so much as retch once during La Grande Bouffe; furthermore, no matter how on the nose Pasolini's film hit its anti-fascist and dehumanizing buttons, at least we got its rather obvious and shallow message. For a movie that mixes greed, food, and sex in one repulsive narrative, I'll stick with Peter Greenaway's The Cook, the Thief, His Wife, and Her Lover. Greenaway achieves a sensory overload that makes La Grande Bouffe look like a kindergarten Christmas pageant. The art direction, the colorful dishes, the scatological explosions--La Grande Bouffe doesn't quite compare.

Nevertheless, for all those complaints, setting aside a quest for greater meaning, I still actually enjoyed La Grande Bouffe. In fact, I was kind of surprised that its two-hour running time passed so quickly. It was anything but tedious, and I think that is largely thanks to the marvelous cast. I could watch Marcello Mastroianni be lecherous in just about anything, and his fellow actors are game to try to keep up with him. It's just that if La Grande Bouffe is meant to be a great feast intended to overload the viewer the way its characters engorge themselves on booze and pâté, it fails to satiate. Rather, it's more like the old cliché about Chinese food: I was hungry for a more substantial movie an hour after the closing credits.

Video:
From what I can gather, this single release of La Grande Bouffe should be pretty close to the same as the one that was in the Marco Ferreri collection released last year (review here). It sports an anamorphic 1.66:1 transfer, preserving, its original aspect ratio. Though not a frame-by-frame restoration, it does look fairly good. Excepting some scratches and other damage, the colors look strong. There is some graininess, though a lot of that appears to be a matter of the original film stock and not entirely a transfer problem. I did notice some edge enhancement and jagged lines, but it wasn't an insurmountable issue. See the image below for one of the worst examples, noting in particular details around Mastroianni's hands. 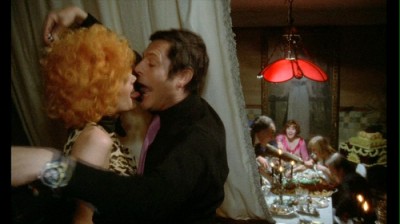 I did catch one problem I've seen before in other Koch Lorber releases, and that's a momentary pause at quite a few of the chapter breaks. Not a terrible thing, but once you notice it, trust me, you'll keep noticing it.

Sound:
The original Italian soundtrack is given a mono mix that sounds pretty good. I didn't pick up on any hiss, and the tones all sound correct and balanced. The subtitles are yellow and well written, and they pass at a readable pace.

Extras:
The sole bonus is a five-minute excerpt from the documentary Marco Ferreri: The Director Who Came from the Future, the entirety of which can be found in that aforementioned boxed set. This portion, naturally, focuses on La Grande Bouffe.

FINAL THOUGHTS:
Though well acted and mostly entertaining, I can only suggest Rent It for Marco Ferreri's 1973 satire La Grande Bouffe. Perhaps I am just watching this movie with jaded eyes, but it doesn't seem all that biting or poignant anymore; rather, it seems to be guilty of indulging in the excess it decries, being no different than, say, Bachelor Party when it tries to tell men to love their wives after giving us a bunch of strippers to ogle. It lacks the incisive comedic scalpel of a Bunuel film, the gross-out shocks of Pasolini, or the sensory overload of Peter Greenaway. Still, I suppose it's a romp and at least worth a curious gander, and the cast is a powerhouse of foreign dignitaries unlike any other. 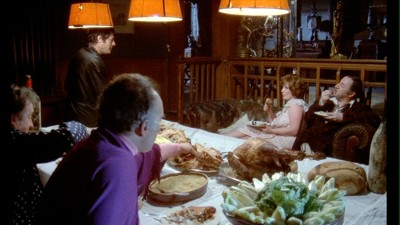