Kino // Unrated // May 19, 2009
List Price: $29.95 [Buy now and save at Amazon]
Review by Stuart Galbraith IV | posted April 6, 2009 | E-mail the Author
A very typical - but enjoyably so - spy / action-thriller from Japan's Nikkatsu Studios, 3 Seconds Before Explosion (Bakuhatsu 3-byomae, 1967) doesn't quite live up to its great title, nor is it as audacious and over-the-top as the better-known Black Tight Killers (Ore ni sawary to abunaize, 1966), a similar film also from Nikkatsu and also starring Akira Kobayashi.

But it's still a lot of fun, with plenty of action, gratuitous sex, violence, and overwrought melodrama. As DVD Savant noted recently in his column, it's great to see so many more Japanese films becoming available, from the heretofore criminally unknown works of director Hiroshi Shimizu, to ordinary but colorful genre films like this. Director Motomu Ida is no household name, but like nearly every genre film/programmer the Japanese film companies were cranking out in the late-1960s, 3 Seconds Before Explosion is positively bursting (combusting?) with style.

Kino's transfer is as attractive as its colorful packaging. The 16:9 enhanced transfer is excellent, though better extra features could have helped viewers put the film into perspective. 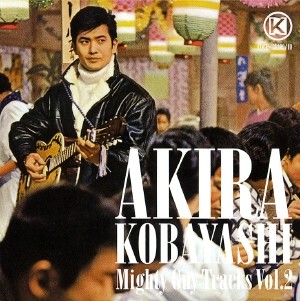 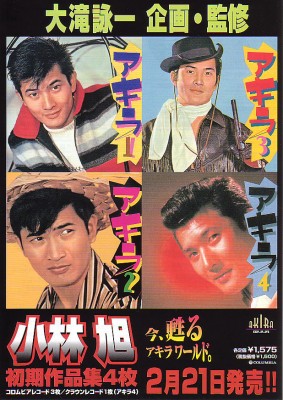 I couldn't find any good images from the film, but here's Akira Kobayashi the pop star, Mighty Guy himself, at the peak of his fame

The typically Byzantine narrative goes something like this: Yabuki (Kobayashi) is an ex-prize fighter-turned-spy working for Japan's Internal Bureau, a shadow agency. He goes undercover, joining Tachihara (Asao Ushida) and his gang in their attempts to steal 30 billion yen (about $83 million in 1967 dollars) worth of uncut gems and gold bullion confiscated by the Japanese military from the "Rabaley" government near the end of World War II. Somehow, the gems came into the possession of Japanese company president Takashima (Takashi Kanda). The Rabaley Government's claims to the treasure expires in a few days, and Yabuki's mission is to see that the treasure doesn't fall into the thieves' hands nor reach their intended destination, an ex-Nazi smuggler named Galen (played an unbilled Erik Neilson, of Terror Beneath the Sea and Las Vegas Free-for-All).

Meanwhile, while poking around Takashima's warehouses looking for the hidden jewels, Yabuki learns that ex-agent Yamawaki (Hideki Takahashi, of Fighting Elegy) is now on Takahashi's payroll, hiding and protecting the stolen goods from Tachihara's gang. As an agent Yamawaki made the fatal error of "putting women before duty," and quit after saving the life of nightclub singer Nana (Katsue Takaishi, attractive but with a highly visible acne problem). Much of 3 Seconds Before Explosion is built around the rivalry between hip and cynical bad boy Yabuki and the more introspective and fatalistic Yamawaki.

Based on a story called Destruction Order No. 1 by Haruhiko Oyabu, 3 Seconds Before Explosion is very representative of the kind of action-thrillers studios like Nikkatsu were churning out almost weekly during the mid- to late-1960s. Partly influenced by the James Bond craze - huge in Japan at the time - 3 Seconds also exemplifies the long-standing tradition of Japanese gangster films, with Nikkatsu's particular emphasis of pop music tie-ins and multimedia synergy. (Surprisingly, Akira Kobayashi himself does not get a chance to sing in this one, but Teichiku recording star Takaishi does, as well as Shiro Hide.)

And cranked out they were: this was just one of eight movies Kobayashi appeared in during 1967, though two of these appearances were cameos. Director Ida did two other films that year, both of which starred Hideki Takahashi.

And yet despite this, movies like 3 Seconds Before Explosion are impressively stylish with striking widescreen compositions, in this case by DP Izumi Hagiwara (who also shot Ida's other two releases that year), as well as '60s-a-Go-Go art direction by Kazuo Yagyu, and a good, jazzy score by Seitaro Omori.

While it lacks much of the silly fun of Black Tight Killers, the picture still has its over-the-top moments. An early scene has the Tachihara gang cracking Takashima's booby-trapped safe, triggering an explosion sending dismembered limbs and bright-red chucks of meaty flesh flying in all directions. Erik Neilson's performance as the ex-Nazi is hilariously awful; a hammy gajin actor to begin with, Neilson also has to speak rudimentary German ("Sehr gut! Wunderbar!") while slobbering over a Chinese gun moll, Arisa. Funny stuff.

Kobayashi, popularly known as "Maitogai" ("Might Guy," or "Mighty Guy") in Japan, gives a confident, relaxed performance. By this time Kobayashi's puffy face, slicked-back jet black hair and pinched features suggested a Japanese Elvis, and he positively exudes cool - it's practically coming out of his pores. (Today, he's a lot puffier and comically out-of-step with the times, sort of like mid-'70s Elvis, or maybe ex-fighter Jake La Motta.) There's a very impressive chase scene across Tokyo office rooftops, and at one point Kobayashi - not a stunt man - actually makes an impressive leap from one building to another probably six or seven stories up. A pre-title scene has Yabuki undergoing intense interrogation testing, including being subjected to a high-pitch wail that'll a) have you in the audience climbing the walls as much as Yabuki; and b) convinced you've got a defective DVD.

Filmed in color and NikkatsuScope (2.35:1), 3 Seconds Before Explosion looks great on DVD. The color, contrast, and sharpness are exactly right; it's pretty much a flawless transfer of good film elements. The optional subtitles are good without being intrusive and the mono Japanese-only audio is fine.

Except for an okay image gallery, the only supplement are two unrelated, untranslated trailers for Cops vs. Thugs (1975) and Yakuza Graveyard (1976). A title like this doesn't need to go whole hog with the extras, but cast/crew bios and some background on the film would have been nice.

Fans of Japanese action-thrillers will find much to like in this release, while the excellent transfer is an additional incentive. Highly Recommended.