MGM // PG // March 24, 2009
List Price: $34.99 [Buy now and save at Amazon]
Review by Stuart Galbraith IV | posted April 10, 2009 | E-mail the Author
Moonraker (1979), the 11th James Bond movie, based on the third (and very different) Ian Fleming novel, is one frustrating 007 adventure. Lavishly produced on a then-gargantuan budget of $32 million, Moonraker is a spectacularly handsome film boasting numerous evocative Ken Adam-designed sets, incredible stunts, lavish and (for the time) convincing special effects, and an epic story that, in some respects, is on a scale the series would never again attempt.

Unfortunately, everything that's good about Moonraker is counter-balanced with some of the worst moments in the entire series, and the story is derivative and perfunctory - it's always subservient to the action set-pieces - that for all its spectacle the film seems very mechanical. It's high-concept Bond at its worst, despite myriad components expertly executed.

Partly because of the film's scale and especially because of its many exotic locations, and perhaps due to the effort Lowry's restoration team put into the title, the Blu-ray disc of Moonraker is a noticeable improvement over the only other Roger Moore/'scope title released so far, For Your Eyes Only (1981). In short, it looks just great, certainly better than it did when I saw it at the Livonia Mall Cinemas on its spitball-encrusted "Picture Window Screen" in the summer of 1979. The extras are plentiful but nothing new. 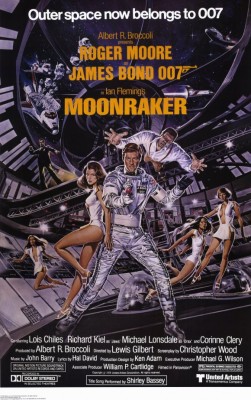 Moonraker opens with a two-part, slam-dunk pre-titles sequence: an American space shuttle bound for the United Kingdom, riding piggyback atop a 747, is hijacked mid-air, its rockets destroying the carrier plane in an impressive fireball. "M" (Bernard Lee, in his last series appearance) orders Agent 007, James Bond (Roger Moore) to investigate. (The real space shuttle, while frequently in the news, was in the summer of 1979 still almost two years away from its maiden orbital flight.)

Bond visits Drax Industries in Southern California, where the space shuttles are manufactured. There Bond meets astronaut/scientist Holly Goodhead (Lois Chiles), actually a CIA agent, and circumspect billionaire Hugo Drax (Michael Lonsdale), so wealthy that he moved his entire 17th century French estate (played by the Château de Vaux-le-Vicomte) to California stone-by-stone. (This is a pretty neat idea, accentuated with a good matte shot placing the lavishly-appointed estate and its lush grounds in the middle of the California desert, Palmdale no less.)

With the help of Drax's personal pilot, Corinne Dufour (Corrine Clery), Bond accesses a safe where he finds blueprints for strange glass vials, made in Venice, which turn out to be the casings for a deadly nerve gas. More clues lead Bond to Rio de Janeiro, where Drax is involved with a top-secret mass space shuttle launch.

Many have argued that Moonraker is basically a reworking of The Spy Who Loved Me (1977), the previous Bond adventure, which itself was essentially a remake of You Only Live Twice (1967). There's a lot of truth to this, and the three films share a great many elements in common. For Your Eyes Only was originally slated to follow The Spy Who Loved Me (1977), but the pressure to top that film...and the chance of cashing in on the peripheries of Star Wars and the sudden mad scramble to produce SPFX-heavy movies with outer space settings, was just too alluring for executive producer Albert R. "Cubby" Broccoli to pass up.

The biggest problem with Moonraker is that its story is depressingly perfunctory and obviously little more than a series of set-ups to the major action scenes, and that what story there is has a lot of unmotivated, illogical action. For instance: Who are all these beautiful people boarding Drax's space shuttles "two-by-two," like God's creatures climbing aboard Noah's Ark? Where do they come from? Are they aware of Drax's ultimate plans for them? Did they answer an ad in the Classifieds? Significantly, none has a single line of dialogue.

At 52, about the same age Sean Connery was when he made Never Say Never Again, Roger Moore looks closer to sixty. Where Connery looked robust and fit, Moore aged much less gracefully, and in 1979 was already too old to be believable. A singularly weak cable car fight at Sugarloaf Mountain in Rio is damaged by a great overuse of shots of Moore against a painfully obvious process screen, inter-cut with some use of an equally obvious double. Moore's lighter approach, one that served him well throughout the television runs of The Saint and The Persuaders, didn't really suit the Bond universe because there's rarely any sense of Bond in danger. Even when Drax seems poised to destroy all humankind on earth, Moore's untroubled Bond smirkily stands ready with that humorous quip. In Moonraker there's a good early scene where Bond is nearly killed in a centrifuge (a concept first dramatized in 1954's Gog); it works because for the only time in the film Bond's life is actually threatened and he's shaken by the experience. The film could have used a lot more of this, and fewer scenes like the ludicrous madcap gondola chase through the canals of Venice, which is closer in spirit to a Blake Edwards Pink Panther movie than anything in Fleming's Bond universe. When you've got pigeons doing double-takes, you're a long way away from From Russia with Love.

The film's high cost resulted in an unusual move: the picture was co-produced with French moneys and further buttressed with product placement. The latter damages the movie because at times Moonraker resembles a two-hour-plus television commercial for soda pop, watches, perfume, cigarettes (Goodhead keeps a pack next to her bed, but is never seen smoking), commercial airlines - you name it. Some of it is so blatant and in-your-face as to be highly distracting.

Both Chiles and Lonsdale are unmemorable. The scripted dialogue suggest the filmmakers were perhaps aiming for an Avengers-like camaraderie between Goodhead and Bond, but Chiles comes off rather aloof, even icy, though she's positively effusive next to Lonsdale, the dullest of all Bond villains. Obviously chosen because of the picture's French financing, and after British actor James Mason turned the part down, Lonsdale is woefully inadequate; I've always felt Jean Marais or Michel Piccoli would have been great alternate choices. Lonsdale is so inexpressive it's no wonder Jaws (Richard Kiel), the outrageous steel-toothed giant, was brought back (from The Spy Who Loved Me) in the number two spot. The most popular secondary villain since Goldfinger's similar Oddjob, Kiel's character in this is played almost strictly for laughs. Indeed, Jaws is so hapless - and indestructible - that he becomes quite cartoon-like, the Wile E. Coyote of the spy movie genre. When Cupid's arrow strikes Jaws and he falls in love with a diminutive (but busty) blonde (Blanche Ravalec), in pigtails no less, the series hit a new low.

Frustratingly, the film gives Jaws one atypical scene where he actually gets to be genuinely menacing, dressed as a Carnival clown in Rio, stalking Bond ally Manuela (Emily Bolton). Scenes like this, and another one with Bond in Drax's chemical laboratory in Venice, where Bond witnesses (and, in fact causes) an accident that kills several scientists, hints at a much better film that never is given time to develop.

From a production standpoint, however, Moonraker is first-rate. Ken Adam's sets are so numerous one barely has a chance to admire them before the next one is introduced. The stunts are spectacular and the famous opening, with Bond thrown out of an airplane without a parachute, almost but not quite tops the celebrated teaser to The Spy Who Loved Me.

Derek Meddings special visual effects, achieved through more elementary means than those in Star Wars, are very impressive, and as properly balanced on this Blu-ray disc, still hold up well 30 years later, no small feat. John Barry's score is very good and thankfully dispenses with the disco-y orchestrations of Marvin Hamlisch's cues for The Spy Who Loved Me, with Barry's scoring for the outer space scenes in particular a standout. Many were disappointed with the Shirley Bassey-performed title song after Carly Simon's "Nobody Does It Better" from the previous Bond, but it's excellent on its own terms, a dreamy ballad that's almost haunting. 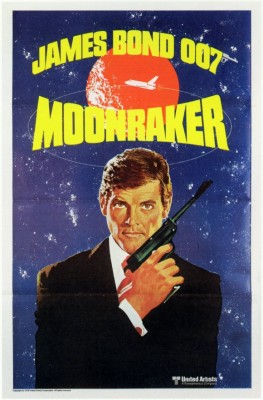 Roger Moore looks nowhere near this young in the film

Filmed in (2.35:1) Panavision and originally presented in Dolby Stereo with prints by Technicolor (there were some 70mm blow-ups also, as I recall), Moonraker looks really terrific throughout its 1080p, 50GB presentation, despite a few moments where the digital tinkering is briefly obvious. The image is razor sharp, with the Venice and Rio locations, and Ken Adam's sets looking particularly good. However, the high-def image only draws further attention to Moore's advancing years (note the liver spots on his puffy hands). The model work by Meddings looks great, even if it's not always 100% convincing.

Some consumers aren't happy because Maurice Binder's opening titles have been pretty severely window-boxed. Though clearly overdone, I don't find it ruinous, and I sympathize with MGM's desire to ensure that the titles are legible on all monitors.

As stated above, the DTS HD 5.1 Master Lossless Audio boosts slightly the original 3.0 Dolby Surround mix, which is also, thankfully included, along with 5.1 Dolby Digital mixes in Spanish and French, with optional subtitles in English, Spanish, Cantonese, Mandarin, and Korean. A 121-minute running time is listed on the box, but that's incorrect and the film is 126 minutes, per the original release.

The supplements all are carry-overs that originated either in the May 2000 "Special Edition" or the May 2007 "Ultimate Edition" DVDs: 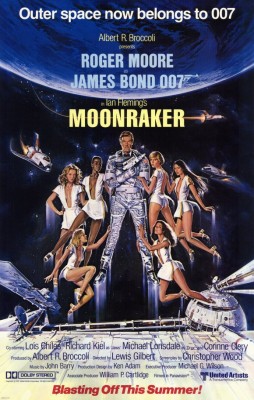 As disappointing as Moonraker is, Bond fans undeniably still get a lot of bang for their buck in what arguably is to date the last of the classical, epic Bond movies, and the Blu-ray disc brings out the film's strong points as much as it amplifies the bad ones. Still, for Bond fans it's practically irresistible anyway, and Highly Recommended. 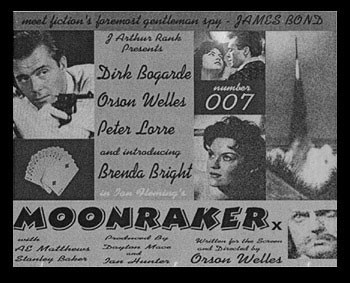